More thoughts on War of the Roses basing. 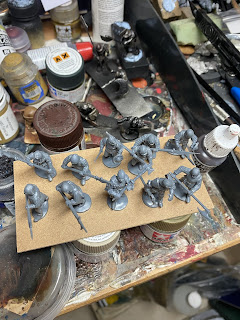 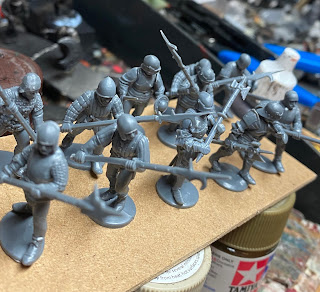 Well more thought and more ideas. I have always been a fan of multi basing and these larger ‘impetus’ style bases do have a lot to offer.
On rereading the Peter Pig web site, they do say these large bases are fine for Bloody Barons. Also with 12 figures on a base, Lion Rampant is doable. A dice to mark down casualties in both games. The main pull for a large base like this would be the ‘story’ you could tell with wounded and dead figures and the ground, also the effect of snow and arrows covering the ground. I still to this day haven’t found an excuse to use snow effects on a base, after chickening out on my Hobbit armies. Of course snow could mean only one battle, Towton, but that’s my chosen conflict in the war so all is fine. It would be nice to do some muddy bases with snow over the top. 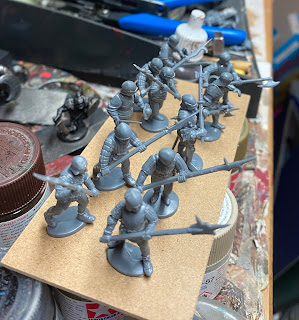 Impetus examples, clearly showing that you do not actually need all twelve figures on a base. 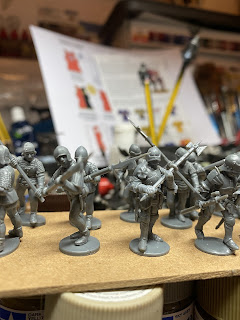 I plan to add about three or four men at arms in full harness at the front of the bill bases.

Now I have scratched this little hobby itch I can put it away for a future project and crack on with my ECW forces. I think I will buy the odd box and quietly gather a small army in the background and try not to pressure myself about painting any figures.
Posted by Secundus at 12:52 am

Labels: War of the Roses

I am a fan of Impetvs and TtS! Style basing.

I've been rebasing old Northern Crusades figures onto Impetus style bases - and using snow! It looks great and makes moving the units about so much easier. Impetus the rules are supposed to be good as well....

Impetus is a smashing game, and element basing allows for all sorts of fun vignetes.

I have a bunch of Gauls that I plan on basing Impetus style; I have never done that style of basing but I am eager to give it a shot. It both looks great and is convenient.

I think we have a winner!

I've been doing impetus basing for TtS, I've also been doing my bolt action Soviets with snow, it does mean doing lots of terrain though!
Best Iain