The Eagle has landed!

For my German infantry I went with Artizan Miniature's late German range and I was not dissappionted. 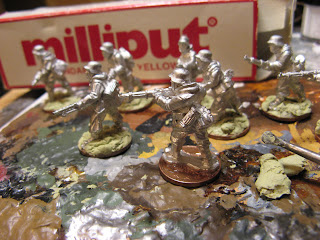 After what seemed an age of debating and reserching I finally decided to base my figures on 1p pieces. The pennies give a nice weight to the figures and for the price of one round plastic base, I can base twenty seven on pennies. Also, because I will be spending longer on each figure, I stuck them with Blue-tac to old paint pots to make it easier to handle them and get to the detail, I saw this trick on the Inter-net a while ago and thought It would come in handy. 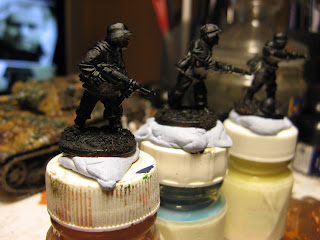 With the Skirmish rules being 1:1 ( one figure = one man) I thought I would make every figure a personalty and try to give him as much character as I could. 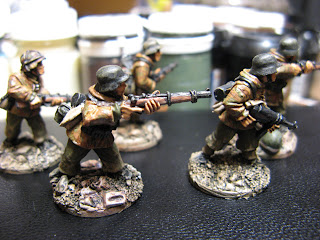 This was started by trying to hide as best I could the penny bases with Milliput. I first pressed Milliput around the figures feet and then with an old dentist tool, sculpted bricks and bits of rubble into It. To add some finer detail, I painted on blobs of PVA glue and then dipped the figures into fine sand and gravel.

So here they are, the beginning of my first German section (nine men). They are wearing the Marsh camouflage smock jackets of the late war.
Posted by Secundus at 7:20 pm

Ahhhh that brings back some memories of Granny German in the submarine pens on Medal of Honour. Hmmmm Stalingrad was good too.

Ahhh yes, Granny 'Meat-hook' with her deadly German STG-assault rifle .....how could I forget her!
I will always remember her hunched black figure, moving at in-human speeds across the TV screen. That brought back a laugh or two when I remembered that game Stu. I think the game designers were having a laugh when they put her in the options...great fun though. This year I hope to up grade to a X-box 360, we'll have to see what that has to offer in the way of strange Nazi Grandma's. JOY!!!