To Defy a King

Well It's been a while but I am finally back with my ECW head on. I found a fantastic drama series on You tube called 'By the sword divided'. Made back in 1983 I thought it was going to be really dated and bad, It was fantastic and very well researched. It certainly stands up to the test of time as far as the uniforms and customs go. I found the siege on the stately home/castle very inspiring and dug out my old 1664 ECW rules to look at the campaign section. It was while I was trawling the Internet that I caught wind of another new ECW release, To defy a king. 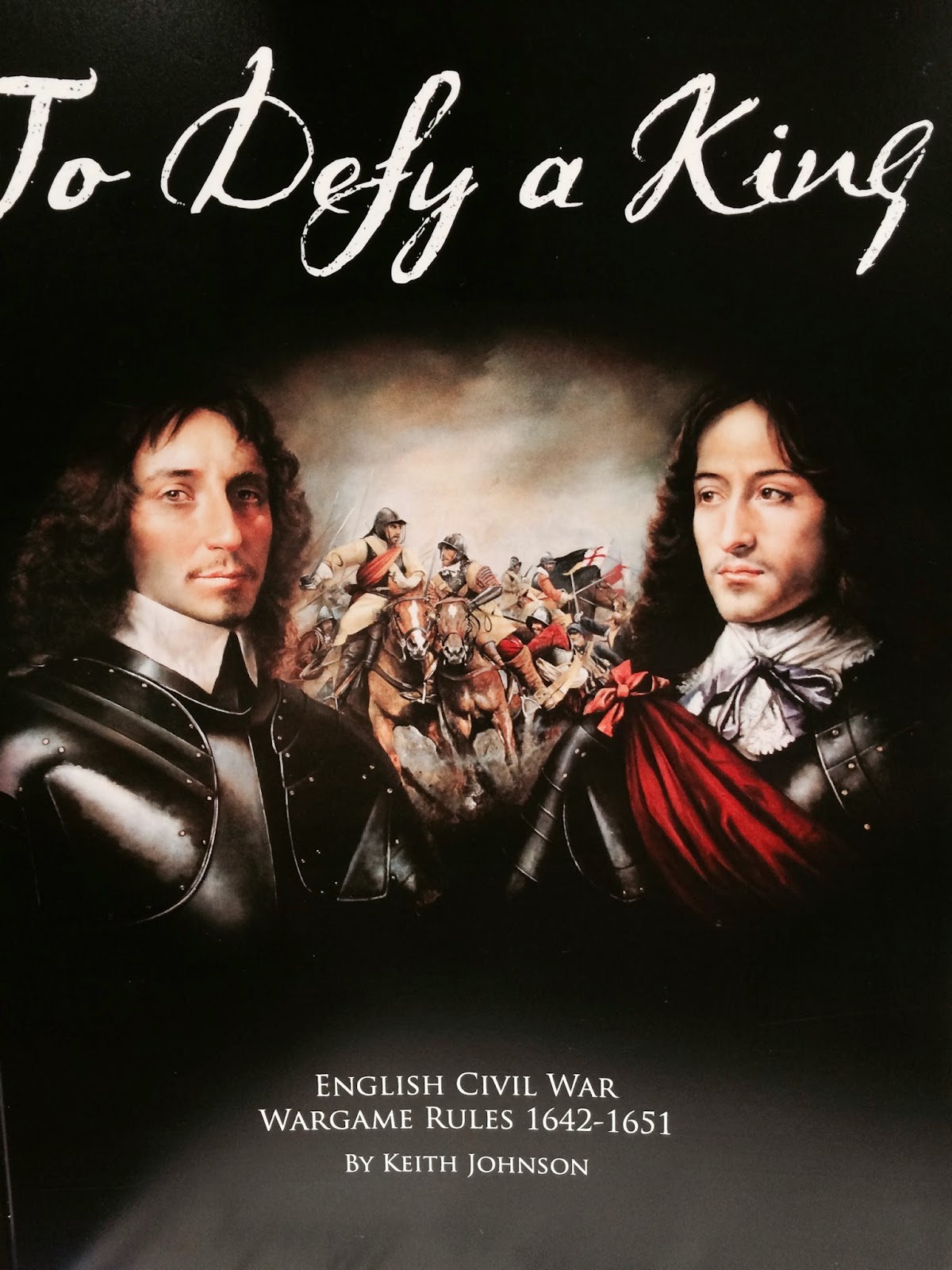 Here it is, after reading a few glowing reviews (many from Sealed Knott members) I decided to take the plunge.

So far It looks good  with lovely easy to learn pages that are very simply laid out. From what I can tell so far It doesn't place to much emphasis on fire power, but leans more toward melee to settle things on the field.

The thing that really stands out and the thing I think the makers are most proud of, is their army generator. A pack of cards is supplied with the rules and these allow you to randomly generator a force of different strength units with varying classes of experience. This I think is great and It leads Itself very well to solo gaming. Something I would love to try out once I have enough troops. 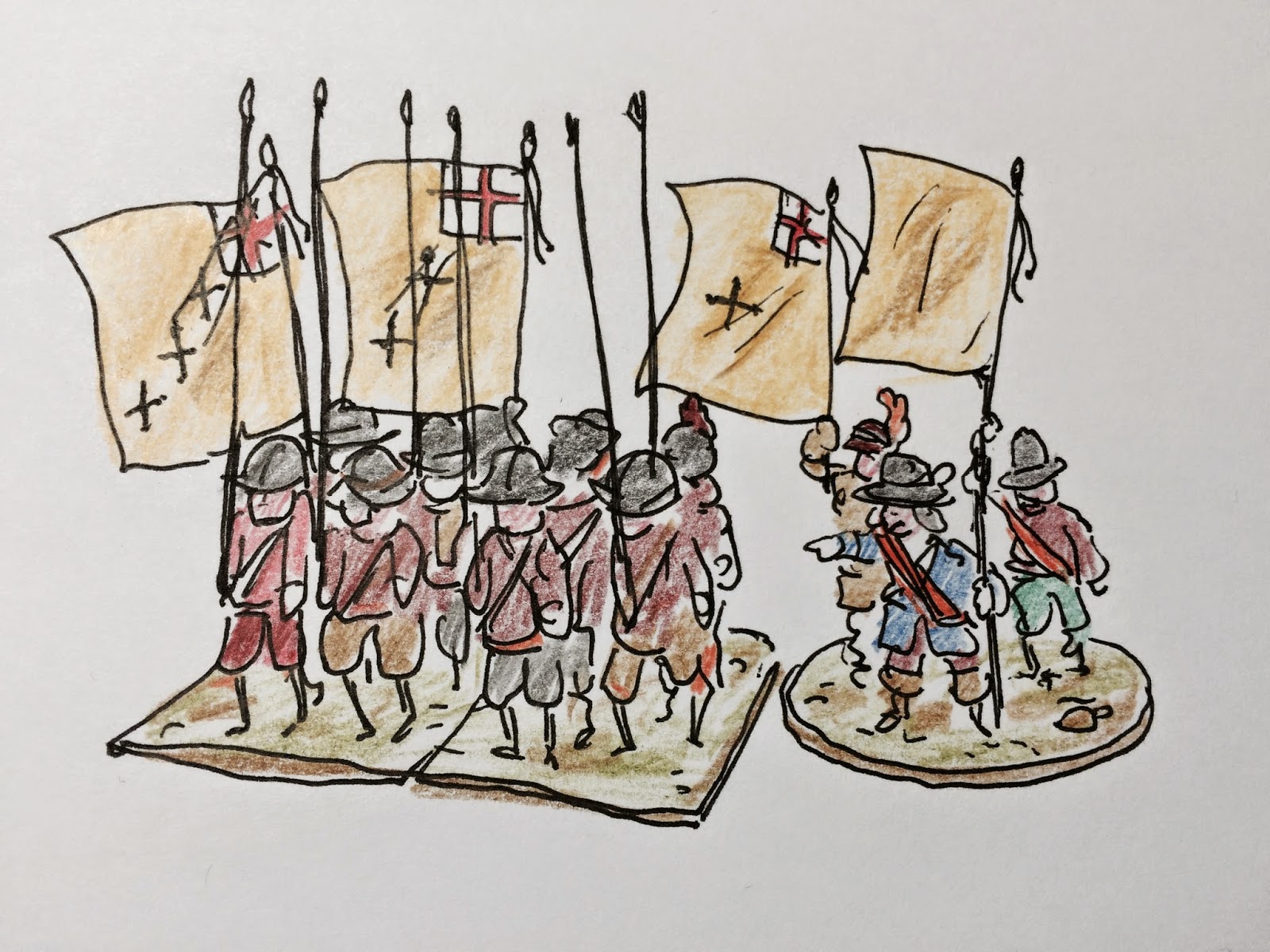 On a slightly different note here is a sketch I did to work out how I'm going to base my standards. I like the idea of having lots of standards per regiment and most 'flag' manufactures produce at least four for ECW regiments. Well, I have been playing around for a while trying to work out a good look. I have finally come up with a nice alternative that combines a few ideas. I will have a 40mm round base with the commander and two ensigns on it and the other two standards will be placed one each in a Pike stand.The round commander base will play no part in the battle or be counted as a 'base', but will simply look nice either at the back or front of the regiment. I think the massed standards will look stronger than just having two.

I did plan on having a wide 80mm x 40mm base at the back of the regiment with all four standards on it, but this looks too confusing and gives the impression of another rank of pikes. I think the floating commander idea is better and will allow the whole regiment to cross bridges in column etc without the 80mm base getting stuck half way across.
Posted by Secundus at 7:06 pm

By the Sword is a splendid view. I look forward to hearing more of the rules...

I like your thinking on basing. Personally like to have the option of a March Column. I have also often wondered if we, as wargamers, should have separate command bases that are essentially markers which could somehow be used in various ways to show unit status. Trouble is, I haven't given it too much thought to come up with many constructive ideas! But I saw an ECW TV documentary last night which said that drummers were highly valued for conveying orders - even to the extent that it was considered bad form to attack your opponent's drummers. So it made me wonder if we should also have separately based drummers, the absence of which could signify some kind of command issue (e.g., disorder). Anyway, I ramble. Await your final choice with interest.

I recall watching "By The Sword Divided" when it first came out on Masterpiece Theatre (US Public Broadcasting) in North America in the 1980s, It was a terrific show and I am so happy to know it's on YouTube. I will have to give it to revisit it. Thanks for this post. Looking forward to seeing more of your ECW project.

I watched "By the sword Divided" a few months ago with the Girl friend on You Tube. But sadly I can only find the first session online.

By the Sword Divided is superb, even after all this time. Your command/colour plan basing is very similar to my own. Looking forward to seeing your work on this stuff mate, one of my favourite periods.

Be good to see what you make of these rules - always on the look out (though BP's Pike & Shotte is still flavor of the month).

Agree on the flags - Dave Imrie did some nice bases where he had four flags in a regiment - two in the pike and then two semicircular command bases for behind each shote wing.

I stuck with two - couldn't face painting any more :-?

I was very impressed by this post, this site has always been pleasant news. Thank you very much for such an interesting post. Keep working, great job! In my free time, I like play game: douchebagworkout2.org. What about you?

This article is really fantastic and thanks for sharing the valuable post.
run3unblockedgame.com

Thank you for that information you article