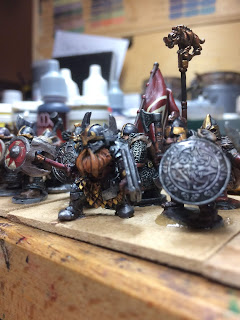 Dain is finally here to command his troops! It was quite a challenge to find a good Dain figure, I had a good one lined up but lost him in the long years of waiting. I’m sure I will find him again probably in one of the many jars of Dettol paint strippers I have going on. 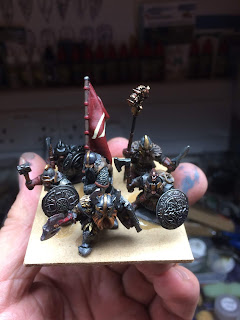 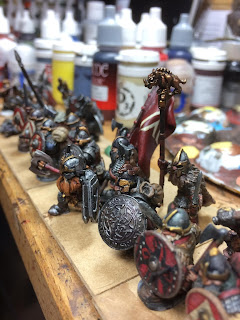 The Reaper figure came with a massive axe in his hand which was quite GW in its proportions, so I replaced it with one from Hassle free miniatures. Although the new axe was still quite large it looks a lot better and is of a finer design. Dain’s red axe is part of his legend so it was worth getting it right. 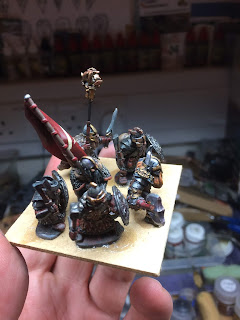 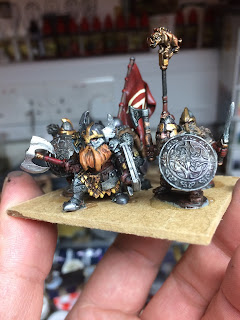 This figure is wearing plate armour on his legs which isn’t really my view of Tolkien’s works but I’m prepared to let it slip as the Reaper figure has such a grim character. It also adds to his name... Ironfoot.
The large ornate shields are from Scribor and I found them by typing in ‘Dwarf shields’ to EBay. 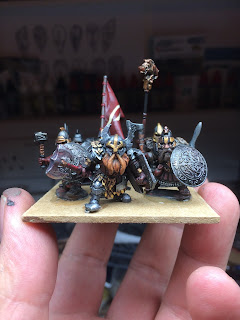 Most of the figures used are from the Oathmark Dwarf heavy infantry box, these are great and can mix well with the other box. Being heavyweights they make for great guards or Huscarls. I have used them here as a kind of elite bodyguard for Dain made from tough veterans. The flag holder is an old Grenadier dwarf sculpted but Nick Lung. I have also used some green stuff to add fur cloaks and repair feet that got damaged in the cut down. These heavy dwarves do not cut down as well as the other box of Oathmark dwarves and a bit of green stuff is needed to make everything right. 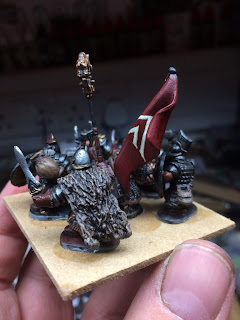 
Oh, wow, that looks so good! I've somehow missed this whole sequence of posts. What rules are you using? LotR with element basing is awfully tempting.

Cannot wait to see all these figures flocked and in battle

As far as rules go, I'm planning to use Dragon rampant for games, but my six on a base should work for just about anything. I've been tweaking the DR rules to make Elves and Dwarves a little tougher in combat than Goblins but they are a good set to start with. The Oathmark rules coming so will be interesting.

I will start flocking them soon I promise, I tend to store up bases then spend a night basing in one hit. It has been a while now so maybe i should plan a night in flockvile.

Lovely looking figures. Look like they walked right out of a high fantasy movie!