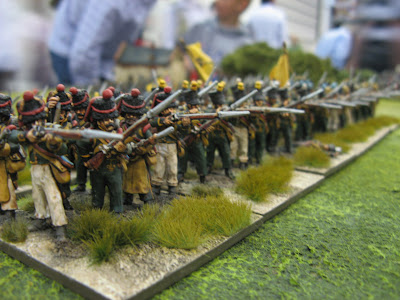 I loved this game, It was very close to what I have planned in the distant future and so was very inspiring. Centred around the farm house of La Haye Saint with all the drama of Derlon's Corps and the charge of the Union Brigade. Of course I can never match this combined effort but It was great to see. 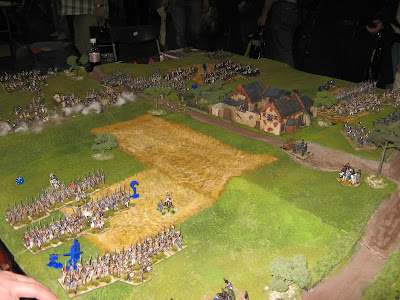 I was amazed at the level of detail in the painting and the large units. It was being played using the Republic to Empire rules and the big battalions were impressive.
Posted by Secundus at 11:26 pm

What are the blue things on the table (no, not French soldiers!!!).

They were markers, but none I had seen before. They marked the state of each unit on the board from what I could gather.

The markers are available from him and are used for the game. They aren't necessary, but they're available.

Thanks for the tip off Coyote, I have ammended my post. There were so many rule books out on the day It did get a little confusing.

This one one of the few games I got to see, and very impressive it was. I realised that one of the players was SaxonDog (top painter and blogger), and got to shake his hand.

I know...I found out when I got home and looked at the photos of the figures.I recognised the half hex's at the front of the regiments, but couldn't place where I had seen them from. A missed chance to meet a painting hero there.

Also the Artillery baggage trould have alerted me on the day...