Orcs of the Red Eye 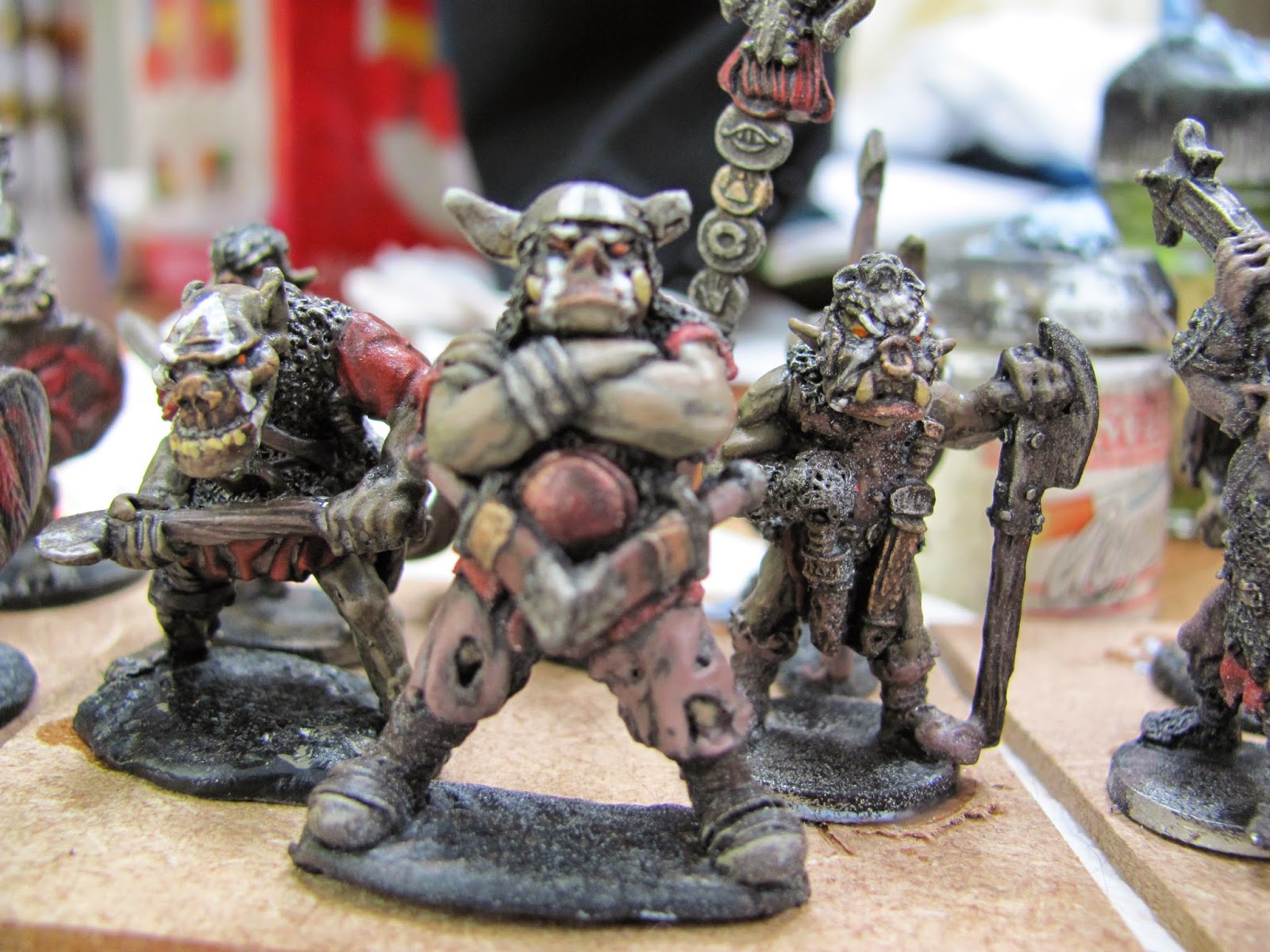 Over the last few months I have been painting mostly Orcs of one kind or another. Most of these are old Citadel figures with a sprinkling of other old ranges to add a little variety. I also managed to bag a few boxes of Magic Metal Orc blister packs off eBay. These were nice a cheap for metal figures and helped to swell the numbers of the unwashed.

I like the idea of creating LOTR armies but using old figures from different ranges instead of the GW ones. The GW LOTR figures are very nice indeed and sculpted by the Perry twin masters, but I like the challenge of creating my own versions with more of a Dark age feel as Tolkien envisaged. So the Orcs below are based on that of Sauron in the Third Age. 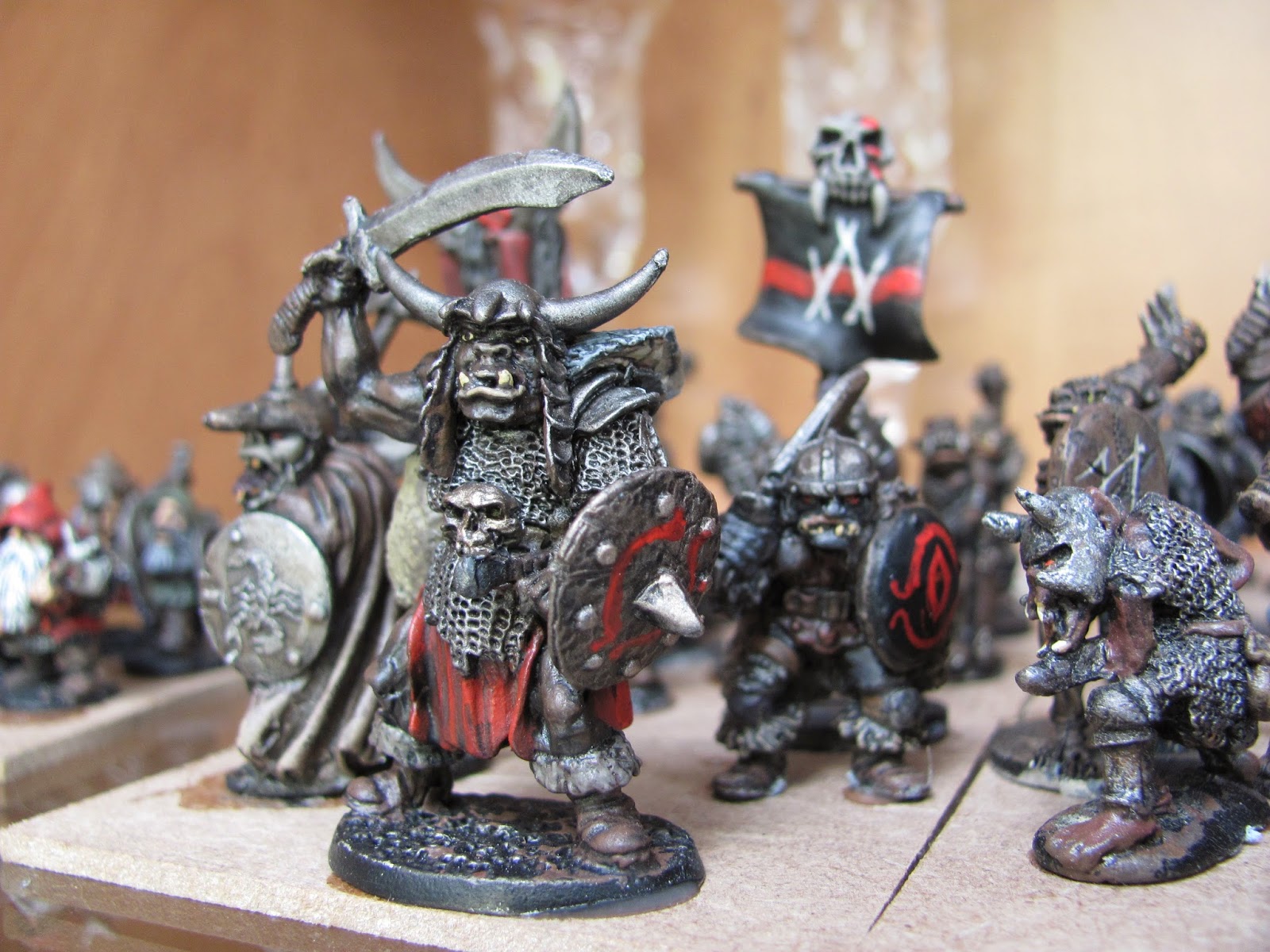 I kept the colours very simple and very dark with red as their main uniform colour. This was taken from the recent films of which I am a big fan.

The Large Orc above is a Warlord from Reaper Miniatures, he is very large and so should make a good Black Uruk. Infact a lot of the larger or well armoured Orcs I painted with dark, almost black skin, this shows they are the black Uruks of Mordor and superior to the lesser runts in the war bands. 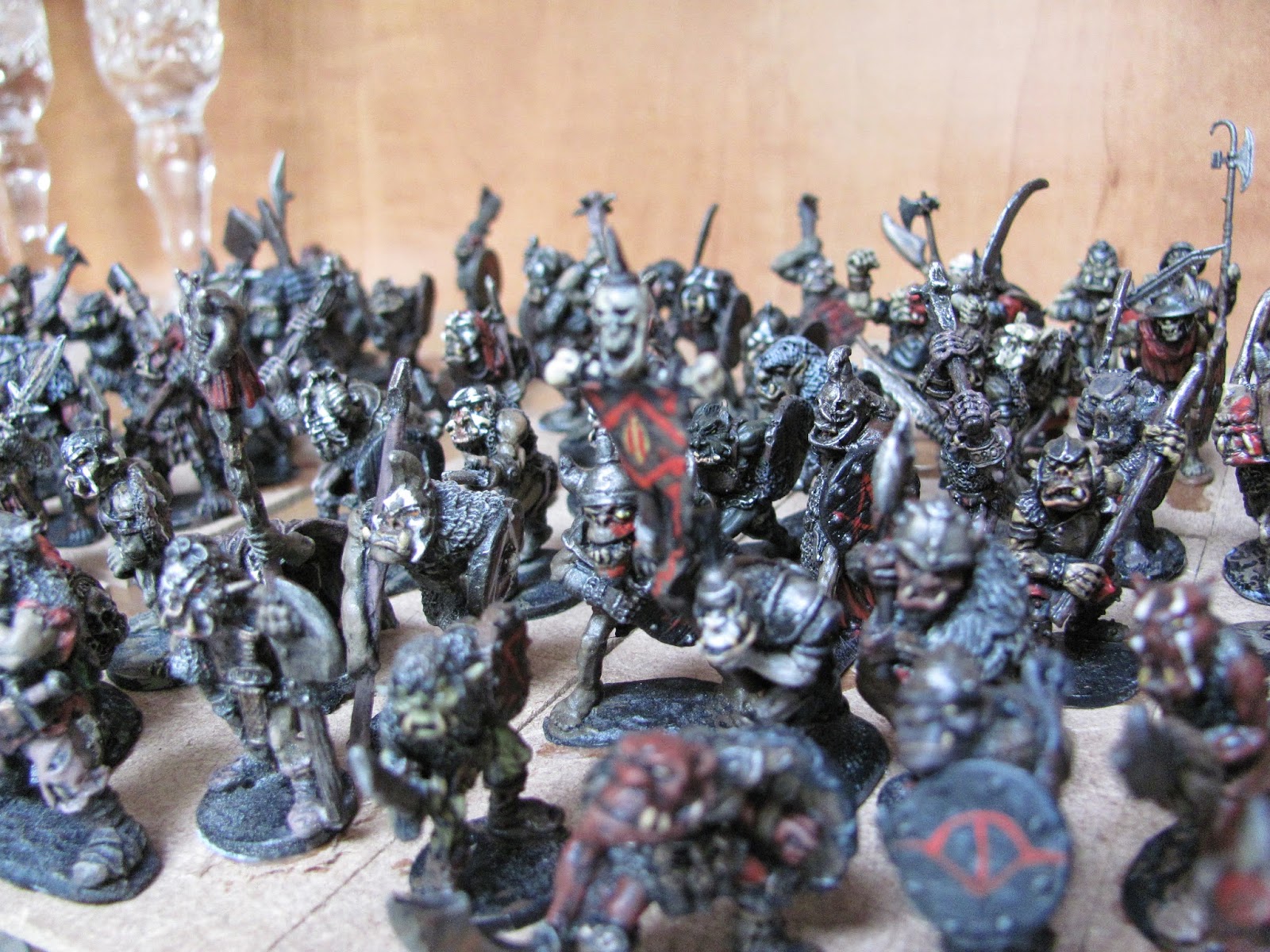 The horde grows and combines many different makes, there's even some plastics in there! 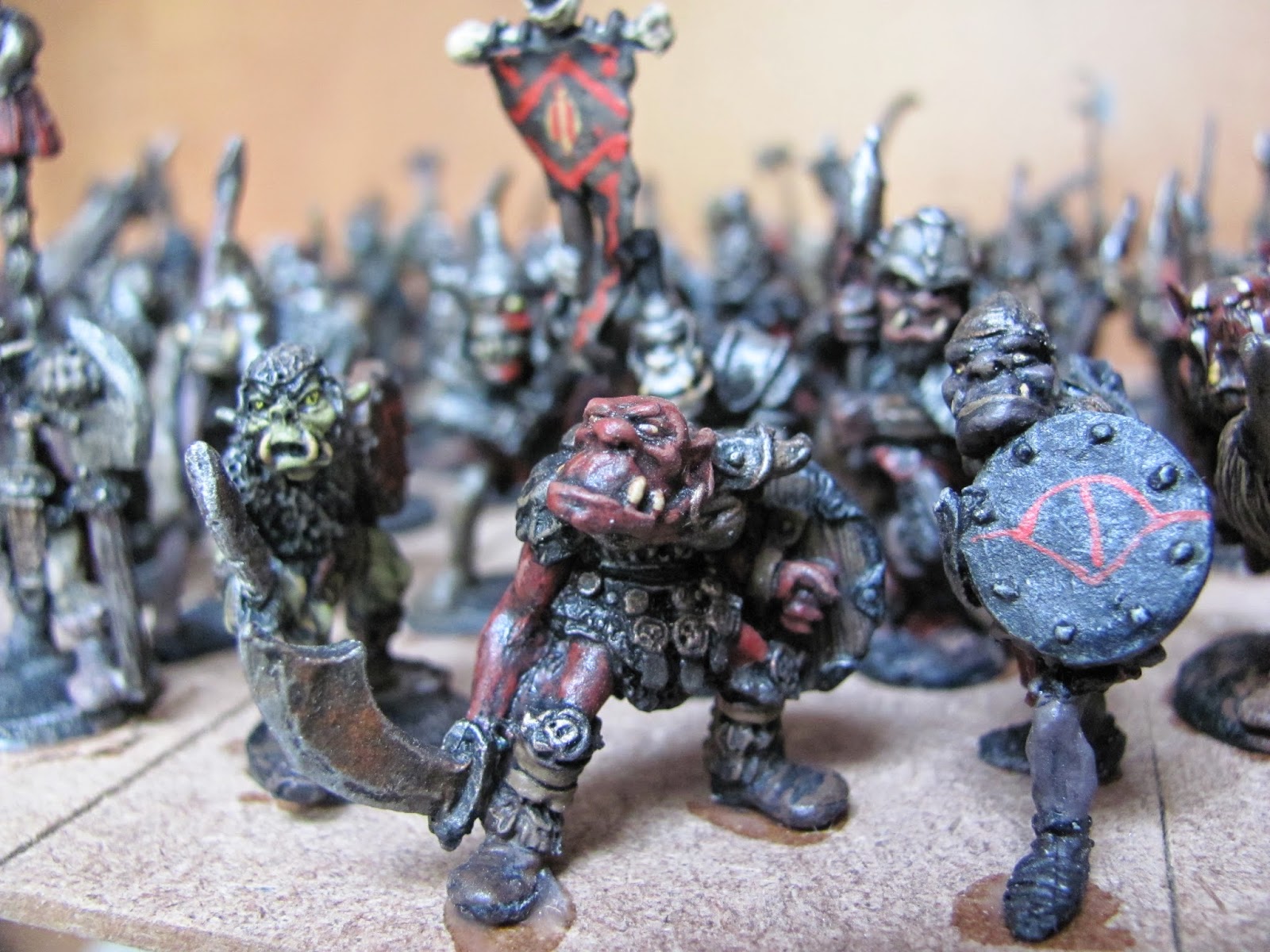 I have always liked this figure and so made him Grishnakh from the books. Another nod to the recent films I painted him with a very red skin tone. This figure matches the description in the book very well, with long ape like arms and broad shoulders. He is sly and clever and has surrounded himself with large, well armoured Orcs. I gave him his own standard to mark him out as a captain and a sneaky sidekick for good measure. 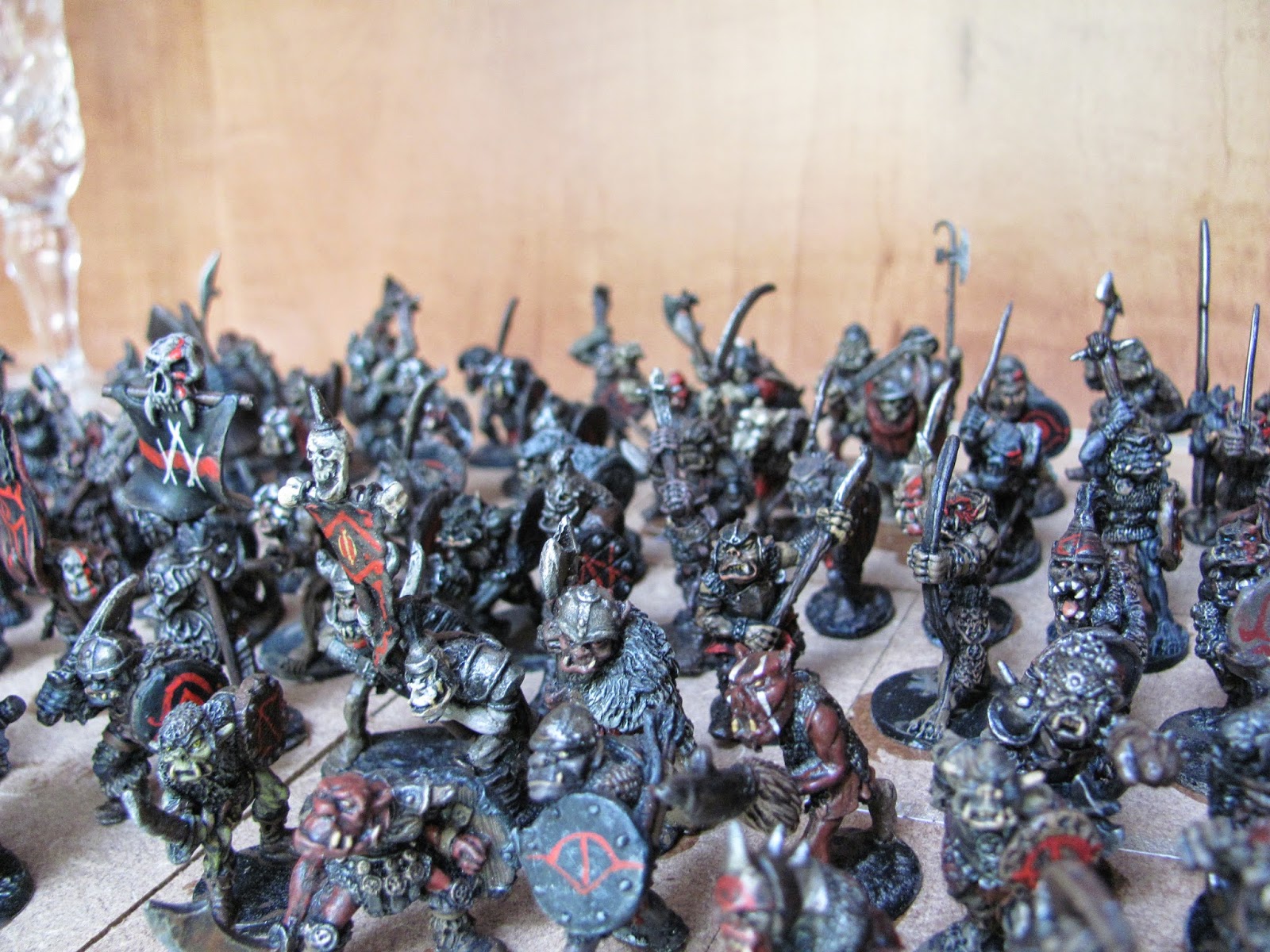 I want to create a large army of these so quickly paint them using simple base colours then wash them with a black wash. Simple highlights are then painted and I move on to another batch of twelve.
Posted by Secundus at 9:57 pm

I love your Orcs! Especially Harboth and his lads from the Black Mountains.
I was thinking about painting my Orcs with a tone flesh similar to yours, with dark skin tone.
Yours are great, would you give the recipe for their skin?
Cheers!

The Harboth figure was painted using Foundry's British uniform colour 'A', then given a black wash and highlighted again with a slightly lighter tone. I almost ruined that entire batch by spray varnishing in the early morning when it was too cold. The resulting snowstorm had to be painted over. I think I may have added a little more attention to the skin to cover over the white varnish.

The other orcs were painted using a wide range of browns, all straight from the pot to make highlighting the colours again easier. Tamiya dark grey was used for some of the Black Uruks, this was then washed with black and highlighted with dark grey again. All the painting was done on a black undercoat.

That helps, thank you very much for answering my question :)
Cheers,