This is the end...my only friend, the end! 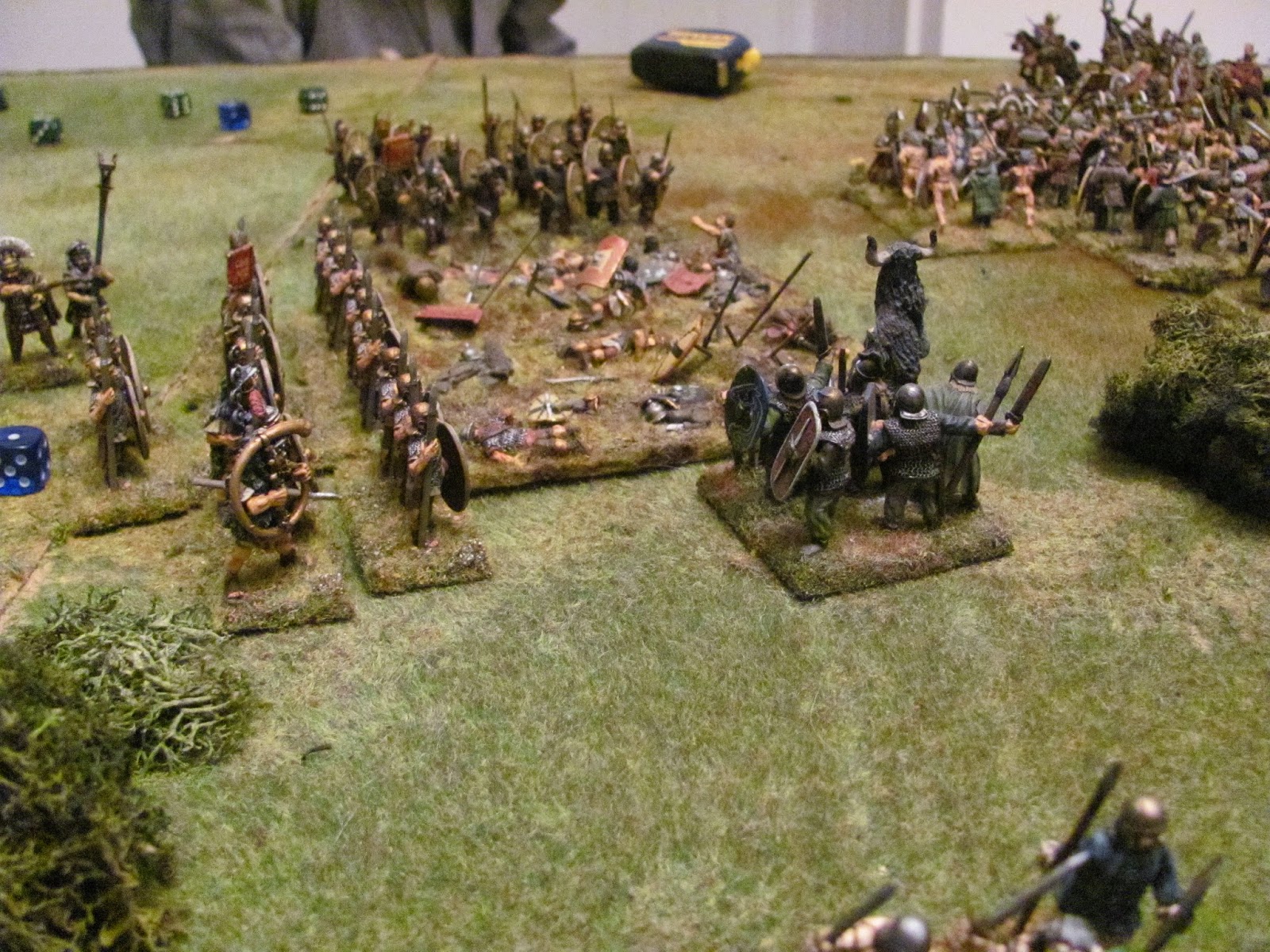 Well it finally happened, the brave warband that had been holding their own for three combat rounds against long spears were finally flanked by another Auxiliary unit. They were tough but they couldn't take a fresh attack in the side. They broke and were destroyed where they stood. Gealoc the army leader had been giving them spiritual support and was caught up in the route. His banner was torn down and he had to flee for his life. 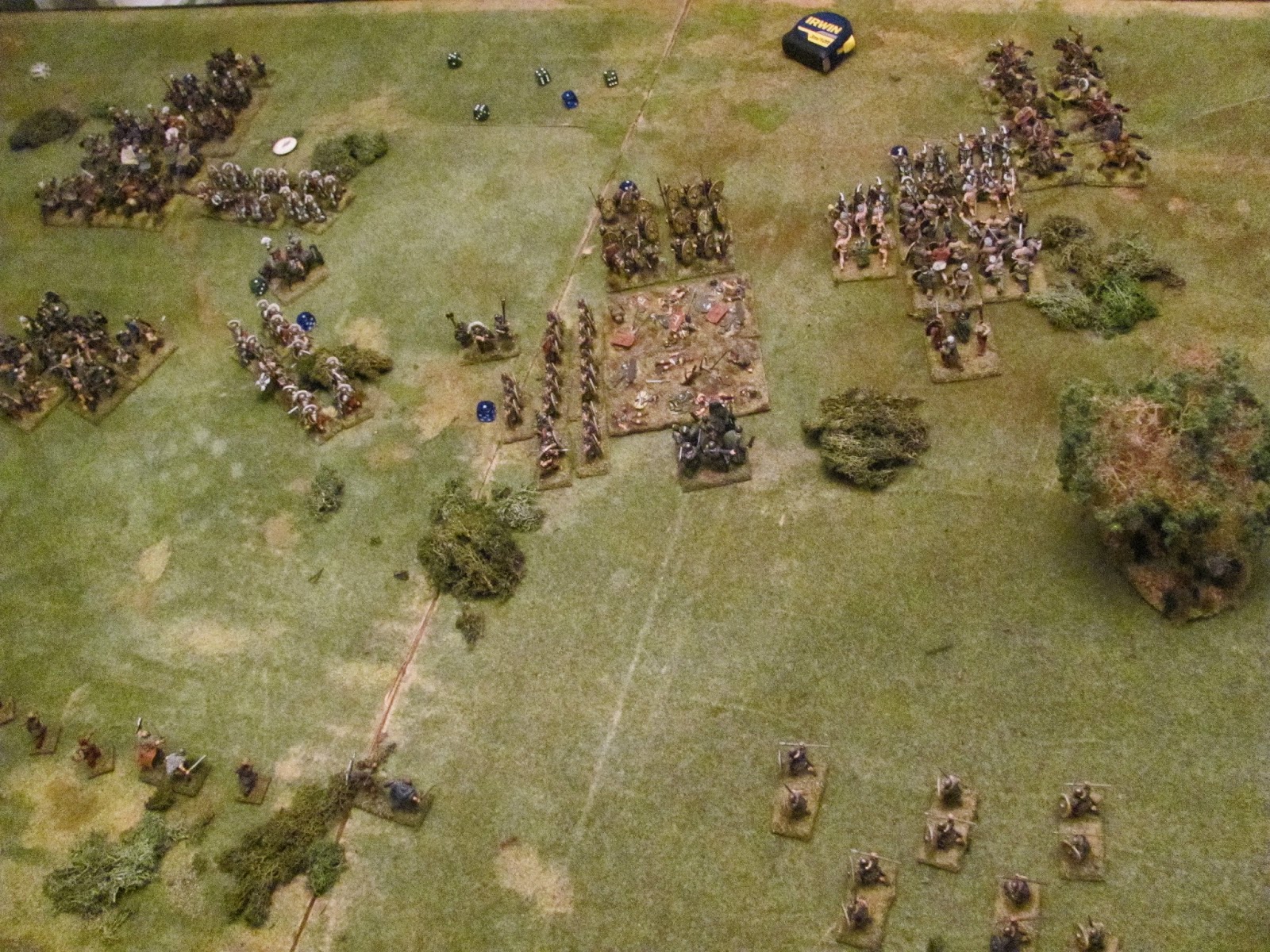 Gealoc gone, the neighbouring units had to make a morale check. This involved rolling under 5 with 2 D6. I don't think any of them made it which lead to an all-out route across the right hand side of the valley. A unit of light cavalry that was just about to make a flank attack fled off the nearest board edge. This was followed by the closest Warband turning and running for their starting edge. Another unit of light horse also turned and joined the masses of fleeing troops. In one stroke three strong Roman units had been freed up and now turned to assist their battling brothers. 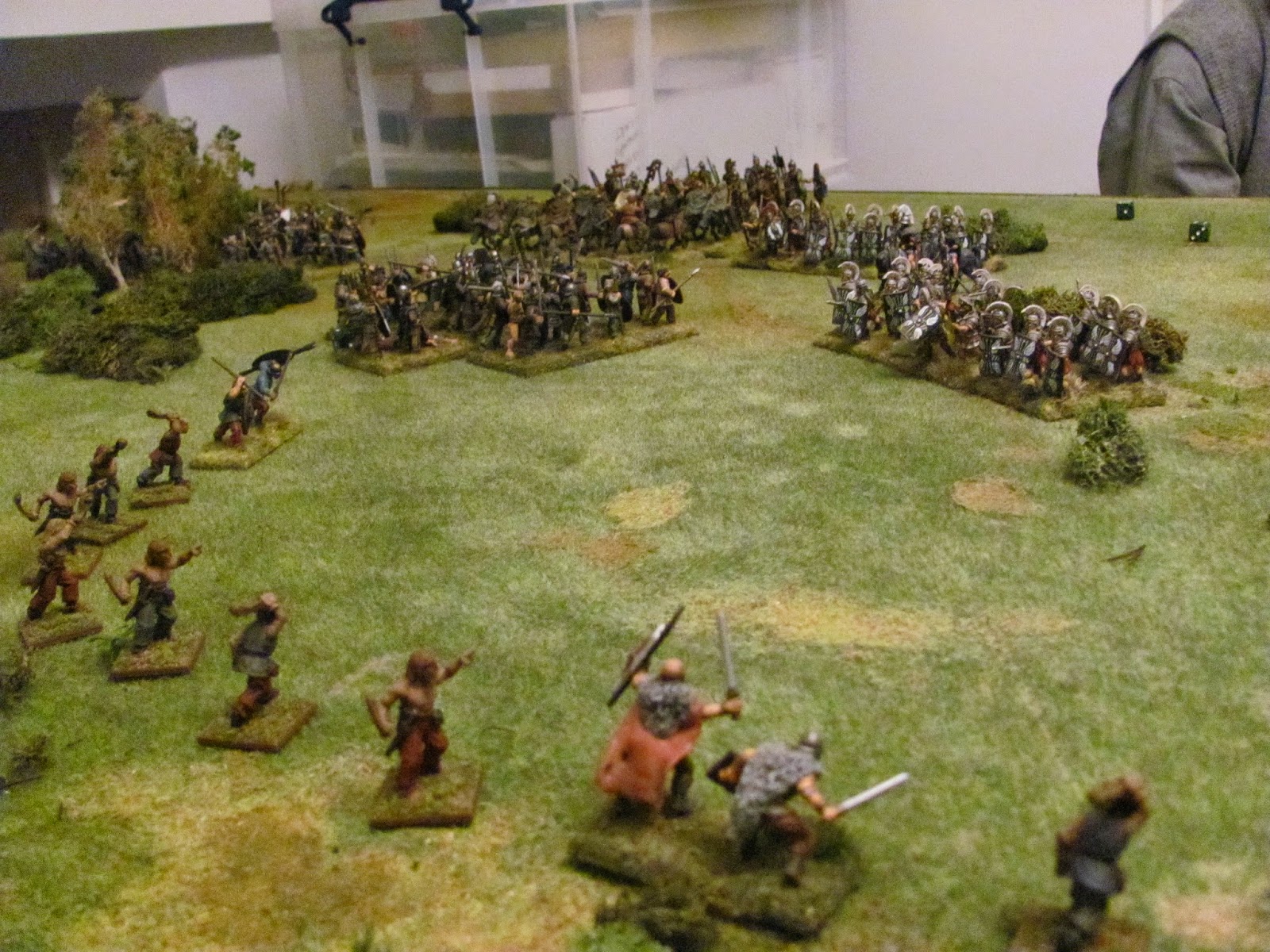 Panic spread across the valley as news of Gealoc's disappearence became known, with the Gods somehow against them, the Celts decided to withdraw. 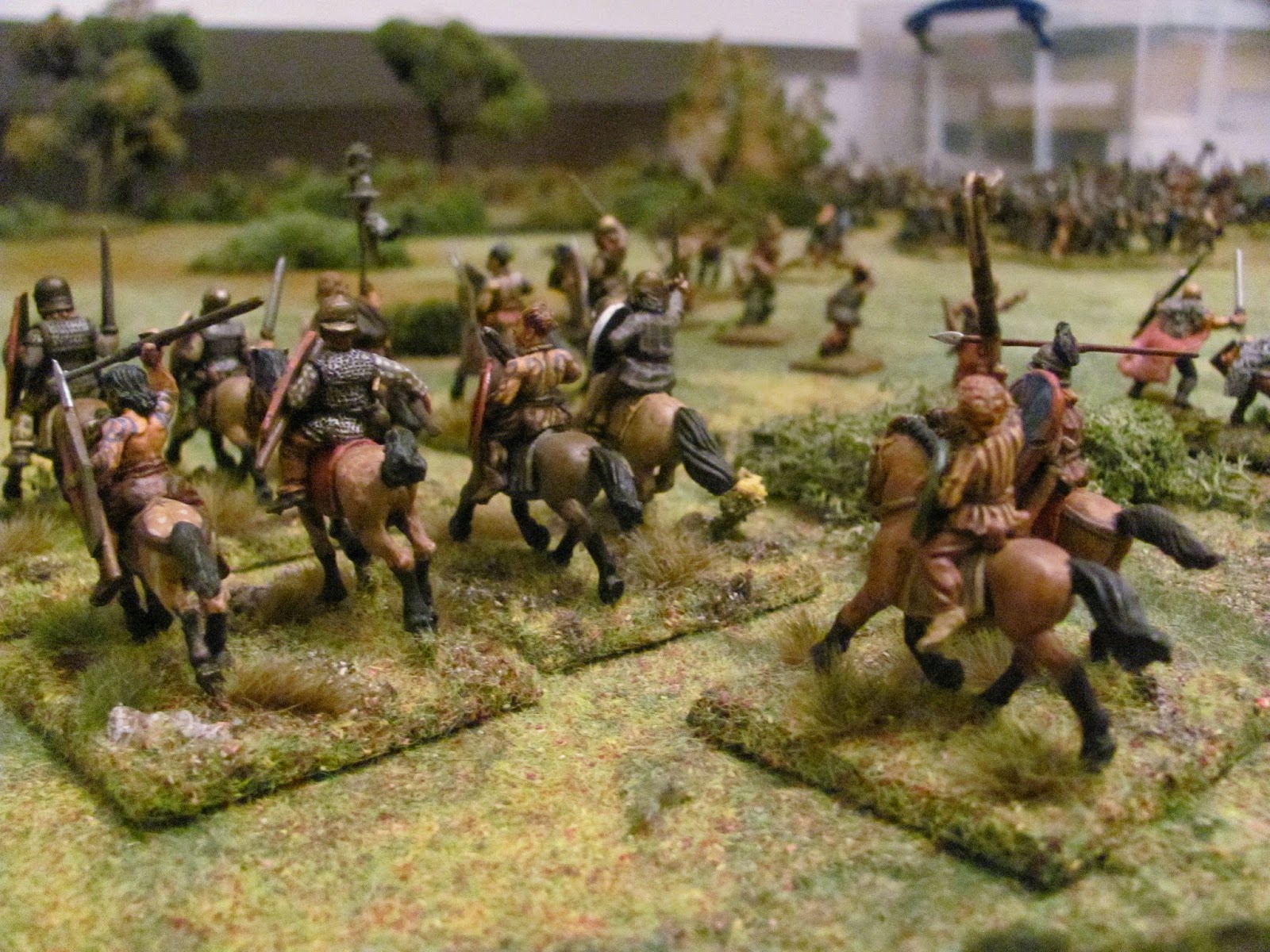 The Celtic army broke down into a disordered mob as it fled the field, It was every Tribe for itself...again. 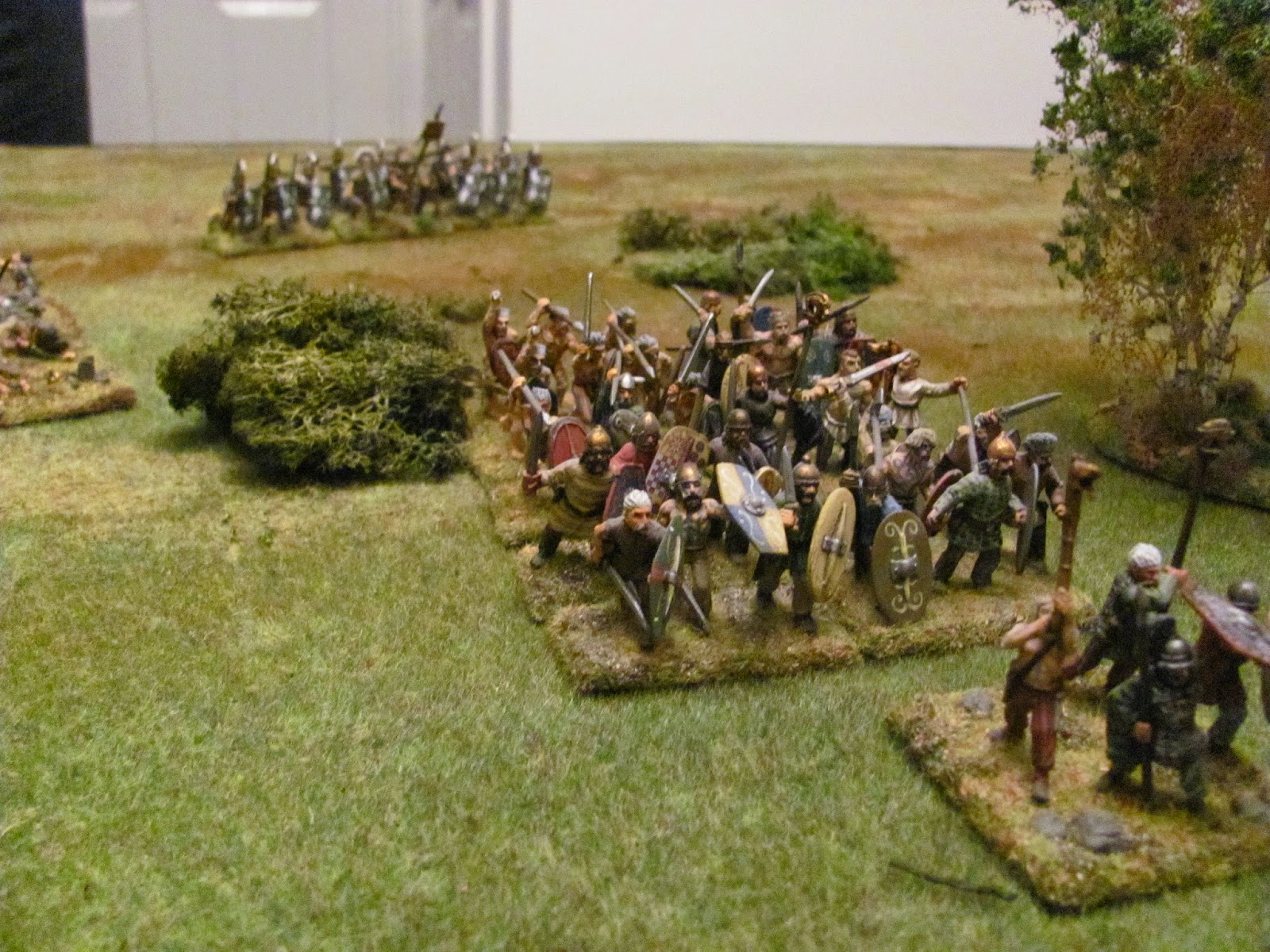 Where is Gealoc? Is he dead...did he get away? The warbands flee the field. The day belongs to the Romans.


We did discuss the battle afterwards and both agreed the warbands should maybe be larger, say 42 instead of 36. This just to give them a little bit more staying power and helped with rank bonuses, and things had seemed to be uneven with the long spears but that was ironed out later once we reread the rules.
The Roman cohorts of 18 men seemed to work well; fewer men meant more cohorts could be taken and tactics used. There are lots of lovely Roman rules to do with hand to hand fighting that we didn't use in the test game, which was a shame. All in all a good set of rules and a good successor to WAB. It might just be me, but I did think they were a bit more brutal than WAB. If that's a bad thing or not I don't know.

I know both players enjoyed the day, just rolling dice again seemed to cheer me up. I couldn't believe it had been that long since I'd last played a game. Must do more.

P.S Gealoc got away and right now is stirring up another hornets nest of trouble.
Posted by Secundus at 1:11 am

Look a good game you had.

It's amazing how fast time flies between games sometimes

Great series of reports. Looking forward to the report of the next game.