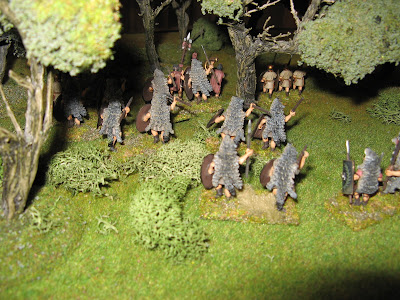 A fierce fight now rages in the wood to the far right, javelins fill the air as the two groups of skirmishers Jockey back and forth under the trees. After twenty minutes of fighting the Greeks finally break and fall back hotly pursued by the now crazed light Legionaries. Even now though the Greeks turn and make a last stand atop a small hillock, Dewolfus's wolfs have failed to force the enemy from the wood. Dewolfus looks for them time and time again, hoping to add their number to the attack and shift the ball back into his court, but they do not appear.
Posted by Secundus at 3:34 pm

The Greeks were always hopelessly outclassed and outnumbered by the elite Wolf Head Light Legionaries and their entire "battle" could be summarised as a "long defeat." They never really stood a chance. Yet some how they managed to tie the Wolf Head's up just long enough, so that they could not come to their General's aid when he needed the Wolf Head Legionaries the most.

That was of course the plan, but I I never had much hope for the Greeks - they were always the weakest component of Plinius's army - and was pleasantly surprised they lasted as long as they did.

It was grimly amusing watching them be wittled away, yet somehow beyond all expectations, always hold to fight further. There really wasn't much left after they made their "stand". :D