The Evocati get drummed in for battle

This is an idea that came to me the other day and has been inspired after reading 'Nero's killing machine'. The Evocati are old retired veterans who can be called back into service should the need be great enough. These old sweats keep their own well worn and paid for equipment just in case such an emergency should arise. Also, their old standards are brought out of retirement so the Evocati can fight behind them once again. 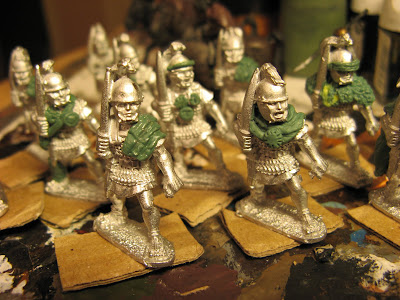 Now because these old boys have been living in nice cosy colonies and towns for a few years, their military dress has become some what altered. Some of them show off their military awards and decorations, while others show off equipment taken from old battles. A few have paid money to have their equipment enhanced and others have even bought some of the new Segmented armour. These old boys have certainly seen their fair share of the Empire and have fought in more battles than they can remember. 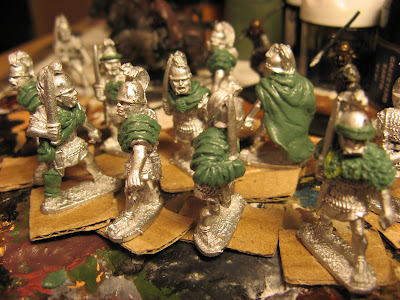 The green stuff here is still rather blobby looking just after sculpting, however, when it drys it can be filed down and nice clean edges can be added.

Counting up the cost 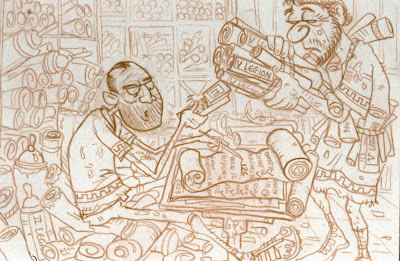 Over the last couple of weeks I have been hard at it working out the points for each army. It has been quite a challenge....not being one for numbers, but fun in a way. It feels like each unit is finally finished when it has been totted up and assigned a place on the map. Adding names of commanders and equipping units really helps to bring each Cohort to life and breathes character into every lifeless figure. Woo ooh there I go again..too much , pull out...phew!
However, after reading the Scarrow 'EAGLE' novels, It was easy to imagine myself as Cato, the Optio, having to spend hours totting up the century's reports and rotas for his less educated Centurion, Macro. A bit of imagination can go along way and turn even the dullest job into a bit of role play....which I fall back on all the time.

Posted by Secundus at 8:36 pm No comments: 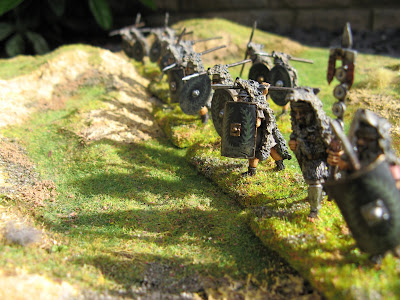 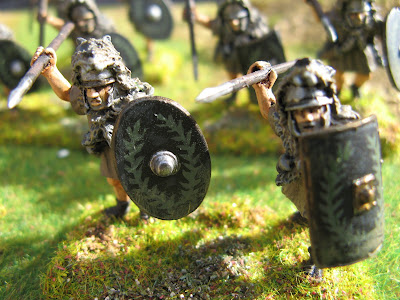 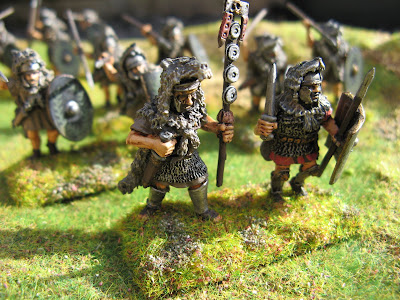 This illustration shows how the wolf skins help to break up the out line of the skirmishers in the tangled forests of the Rhine. 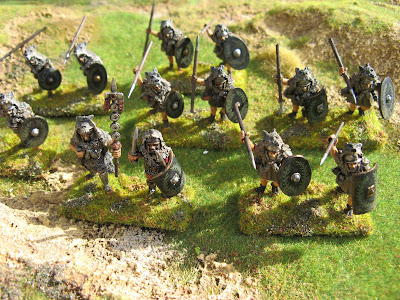 So here they are at last. You can see they have a whole mixture of shield types to break up their uniformity. 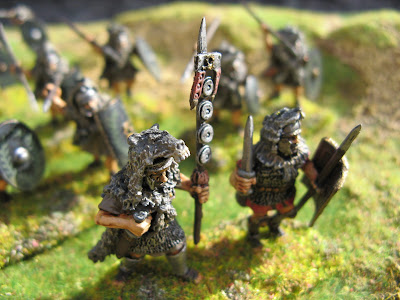 The officers are from different ranges and one is even from a Punic war set. Having light armour and leg greaves, they are great for the out of breath Centurions who have to puff along side their unimpeded brethren.
Posted by Secundus at 8:26 am No comments:

At last after a month or so away from painting, I have finally got round to finishing off those wolf heads 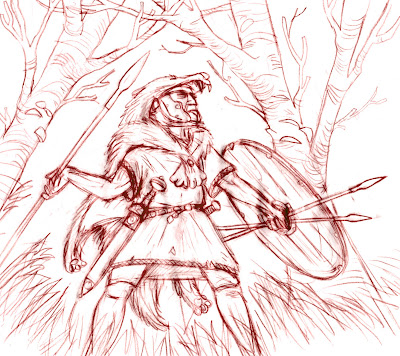 . By giving them different sizes and types of shield they truly have the appearance of a motley bunch of veterans and that's just what I wanted.
Here is a Light Legionary in action. He has disguarded his heavy armour in favor of a a light shield, preferring agility and speed over protection. His wolf skin pelt does offer him some protection against missile fire, as well as being an early form of camouflage, helping to break up his profile in the dappled light of the forest.
Posted by Secundus at 11:35 pm 1 comment: