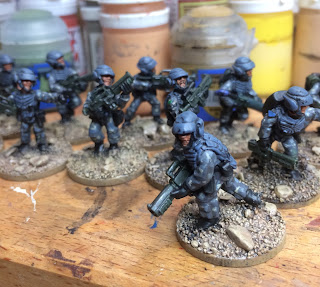 Well after a few hours painting I managed to get 12 troopers done. My main drive for these guys is a long time dream of doing a future American Civil war. These guys are future Confederates...the south will rise again!

To that end I have used confederate colours from Foundry to paint them. 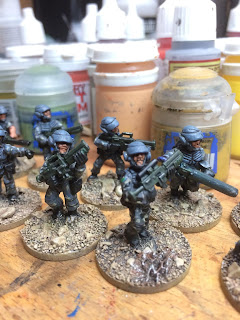 These figures really came to life once the flesh colour was added. I had to stop myself from getting carried away with painting different colour pouches on the belts etc. I used Star ship troopers from the movie as a guide and painted all the equipment black. This helped to give them a future look. I still have the second half of the Platoon to do and I'm tempted to put a few butternut colours in there for the tunics. 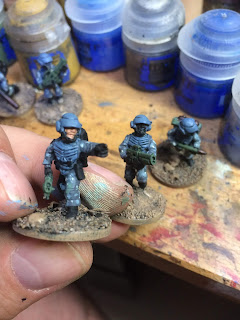 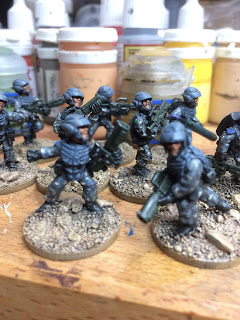 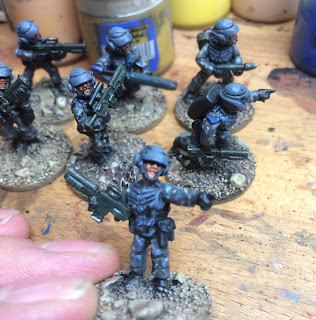 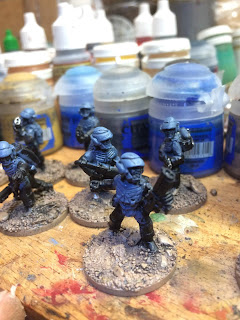 Foundry Confederate grey was dry brushed over the armour leaving black undercoat showing in some of the gaps. Foundry Rebel grey 'A' was then used to paint the tunics. The camo was Rebel grey 'C' and then a lighter grey/blue. All this was then washed with dark brown ink to tie it all together. For speed painting you can't beat a bit of quick dry brushing... 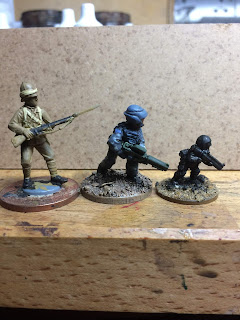 A line up shows how they measure up to 15 and 28mm. The smaller size is a little disappointing but the price more than makes up for it.

I have noticed that Gripping Beast (woodbine company) do a range of Colonial marines and It looks like they may be sculpted by the same guy. The rifles are exactly the same, which is a real bonus for collecting a larger range. They are however true 28mm so they may be a little larger than this lot, however with it being the future they could be genetically altered or something, you know the score. They are armoured so already I have a few ideas about the Iron brigade. 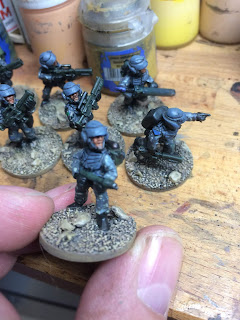 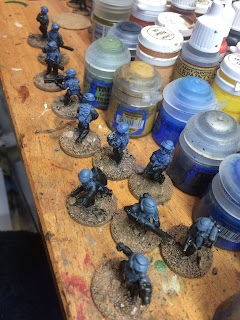 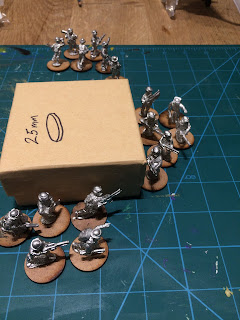 My family went away for a day which gave me a window to get some paint down and go crazy.
I ordered these 25mm colonial marines from 1st corps last year. I thought they were 15mm so was quite surprised when they turned up, however my motto of never get rid of anything really helped out this time. I’ve been rereading the classic 25mm sci fi game Star grunt 2 and thought it would be great to create a platoon. These 1st corps figures are really quite nice and go with the Star grunt very nicely. The figures are a nice blend of Starship troopers and Colonial marines from Aliens. 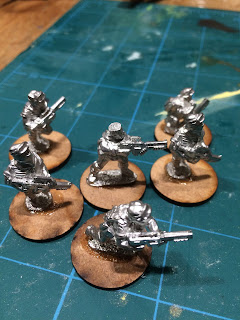 There are also some different types to add to the mix, with the Recon troopers above, they also do other variations on the standard trooper by changing the heads and helmets to make different factions. So quite a lot of variety in the range, but the best thing is the price. If you buy them in the platoon deal they are a £1 a figure. Lovely I thought, being 25mm they are on the small side with other ranges but there is enough of a range that you probably won’t have to mix them. So I had a day to get some paint on these guys quick, just one colour then ink wash or even Army painter I thought. 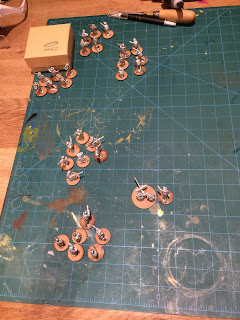 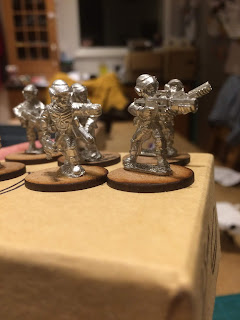 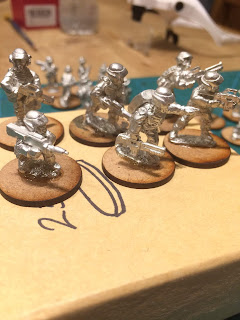