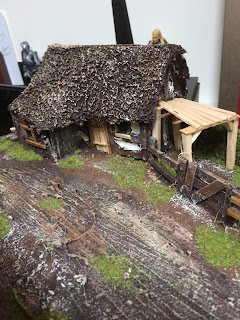 Last week I started to improve the model I bought from Emperor Toads Emporium by adding finer details. I also added a leaning shack type affair ( not painted yet), This is so skirmishers can get in amongst the beams and planks to take cover.
Posted by Secundus at 1:43 pm 7 comments: 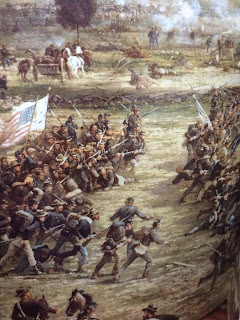 I saw this illustration in a book and thought I would post it on here for reference for later use. This is a great image to draw inspiration from for when basing up my ACW regiments.

For years (1995-2012) my armies were units of the same figure in the same poses, at the time I thought this looked good until I saw armies based for the original Fire and Fury game.
Now I try to mix them up as much as I can, firing, advancing, right shoulder shift, loading, wounded, kneeling etc all in the same unit. If everyone is different, so much the better, I think this picture captures that exactly.
I always go on about the staggered, struggling line which I think captures the dramatic feel and atmosphere of the war, this basically means an advancing line that is all over the place and certainly not straight, again I think this image illustrates that.

Below is a shot of one of my Union Regiments with the new basing principle, I greatly prefer it to my old style of basing, much more dramatic and realistic. 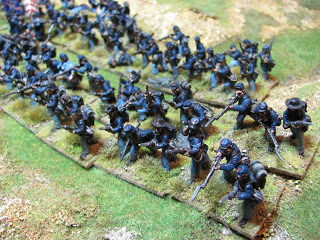 Posted by Secundus at 5:25 pm No comments: 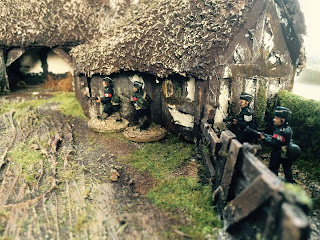 More shots of the ECW village from Emperor Toad's Emporium. these BUF troops were painted last year for a game with a friend, they were fun to do and made a nice change. I added the arm bands with 'green stuff', they are used here to show the scale of the buildings. 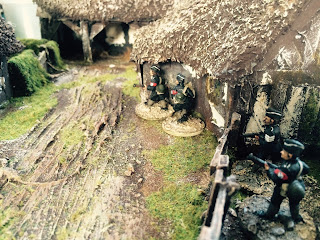 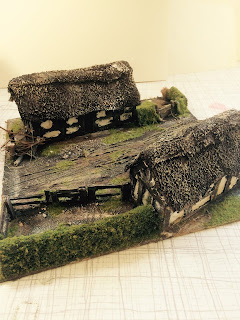 Just received my order from Emperor Toad's Emporium, he makes scratch built war games terrain at a reasonable cost. I opted for the ECW village and a stable type barn. 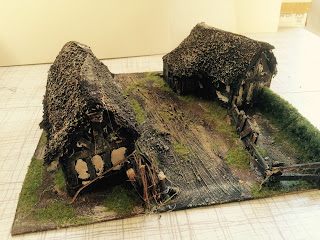 I have in fact bought off him before from eBay but didn't realise it, my ACW fences posted earlier in the Blog are defiantly from Emperor Toad. Anyway back to these models. They are quite crudely made and have obviously been created at speed, the model is criss-crossed with glue gun strands.

However for all the quick dry brushing and crude painting the models do have bucket loads of charm and a kind of realism to them. At first glance you can get quite disheartened but once you take a picture of them or view them from the table they seem to spring to life. 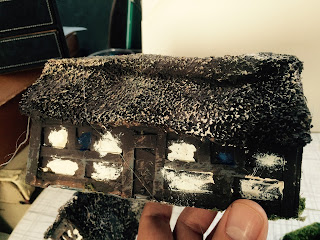 This building had come lose in the post but nothing some glue won't fix.

I would go as far to say these models make a great starting place to creating scenery, being a bit OCD I will go over these models and tidy up some of the detailing. Also I love the idea of fighting in half open building, so I plan to add a barn to the side of one of the houses. You know so guys can cram in there and get some cover.
At £19.99 I didn't think this half timbered open barn was too bad, in fact I think that most of his stuff is good value for money. I certainly haven't got the time any more for making buildings, those carefree single, childless days are long gone. These building are the way forward for me and It also gives me a very fun project to do in tweaking them with washes and extra flock. I have just got Net flicks and released that it is the enemy of all things creative so might have to stop watching it for a month or two. 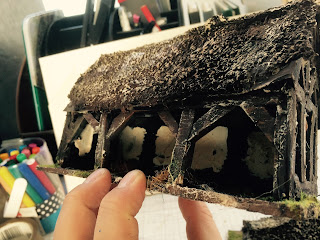 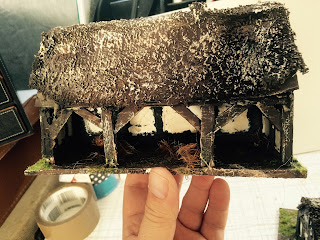 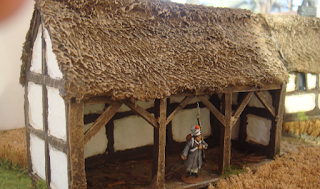 Above is the barn as it appears on the web-site. The barn I got looks very rustic but I will cut the beams down to make them thinner. 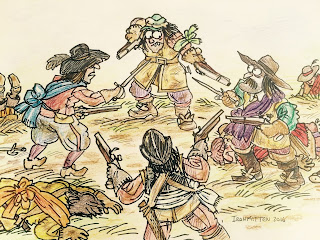 Early war officers meet in the swirl of battle, however who they actually fight for is another matter.

This was inspired from a story I heard about parliamentarian officers being shot in the early stages of the war by accident because they were wearing red sashes. I guess they learned pretty fast, although It wouldn't be the last Civil war this would happen in either.

Personalizing your kit and keeping up with fashion carried its own risks in the 17th Century.
Posted by Secundus at 6:31 pm No comments: 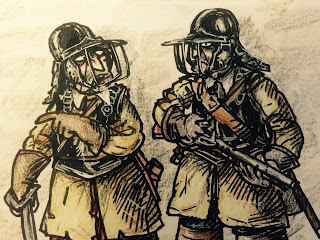 These two parliamentarian troopers prepare to burst into an old mill and loot grain and other useful vitals for the cause. The good Lord will provide...and he certainly does.


This picture was done to try out a new white pen I have, great for doing detailing on black.
Posted by Secundus at 6:55 pm 5 comments: 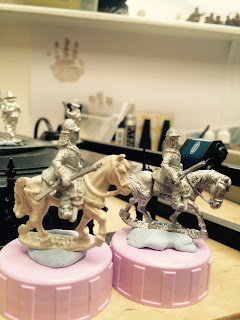 I've been collecting historical figures for many decades now but have always struggled to find a good lobster pot Ironside. Well after a chance buy on eBay I was delighted and thought I would share the tip.

Over the years I've watched the old companies like Essex and Dixon get over shadowed by newer companies like Perry, but actually these old companies are worth a look as a few hidden gems can sometimes crop up. These cavalrymen are a prime example. They are listed as Royalist heavy cavalry on page two of Essex Miniatures, English Civil War category.

In 1997 I bought two ECW armies from Dixon...these are now adding to the lead pile in the loft, although like Essex some of their heavier cavalry are quite usable. 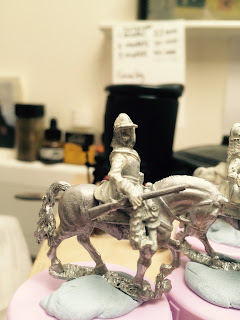 The nice thing about these sculpts is that they match in size the Bicorne and Renegade figures that people tend to go for when collecting this era. The large pot helm is a perfect match for these other ranges, although it has to be said the arms are thinner in the Essex sculpts. There are only two helmeted sculpts available but this can be counter balanced by mounting them all on different horses. Essex does do a wide range of horse for this range. Although I think their later sculpts don't fit with these newer horse models so some filing is advised.

It seems the money I saved on eBay was soon spent on buying different horse poses from the Essex website. Some of the horses haven't got pictures so it's a bit of a lottery as to what might turn up. As I say a lot of the later horse standing poses needed to be filed so the musket holsters could fit on the horses back. However, for me as well as the nicely sculpted pot helm another great point was the open hand which can be cut free from the body and bent into different positions. I also bought a few packs of pistols and muskets from the web site and these look great in different resting positions. 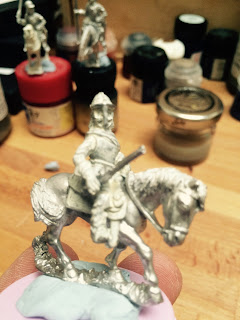 A trooper with a fitted wheel lock pistol and altered arm. Cut the thumb away from the leg and bend the arm up for different poses. It creates great diversity in the unit. 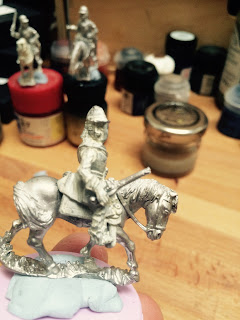 One thing that I was rather disappointed with Is that I also bought from their Web site some of their new New Model Army cavalry to add some variety to the units. These did not match up at all with the older Royalist range and were rather small and crudely sculpted. The pistol holsters were down by the troopers feet. I might still try and mix them in as I have them now, It's worth saying they do not match the larger Renegade and Bicorne ranges. Below is one of the smaller New Model Army figures. 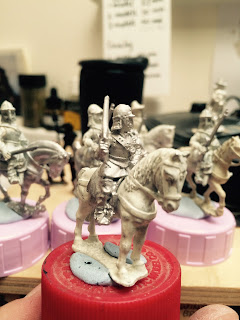 Anyway, If you are collecting ECW and want some great parliamentarian troopers, then I would certainly give Essex a look, just be careful not to mix their Royalist and Round head ranges.
Posted by Secundus at 2:33 pm No comments: