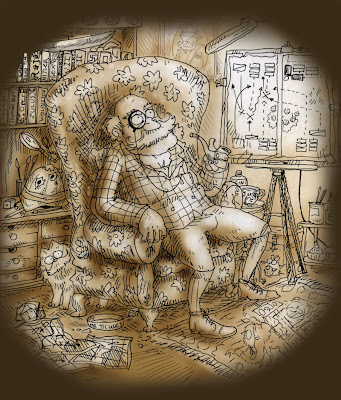 Well here it is at last, I've managed to steal a few moments to write a review of this epic battle. The battle was one of the best I have ever played and included everything that makes for a great day, although starting badly with me ruining my stairs carpet with my new 2 tonne gaming board, It all proved worth it in the end. The game also gave me chance to use a wealth of new scenery collected and made over the years which transformed the board into one from my childhood dreams. 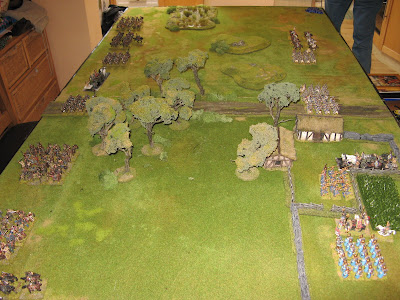 Alanicus also turned up in fighting spirit with a ready made T-shirt especially made for the day, a very nice touch; If only it had bought him some luck. 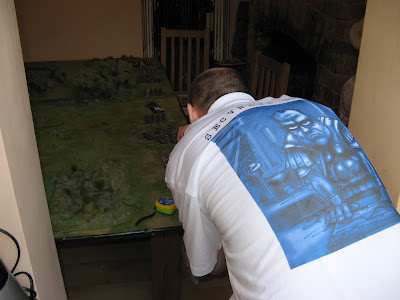 Using the images from the Blog he tried to dazzle my troops with Alanican propaganda....It failed and Alanicus was forced to use the garment to make a makeshift sail to get himself back to Egypt. 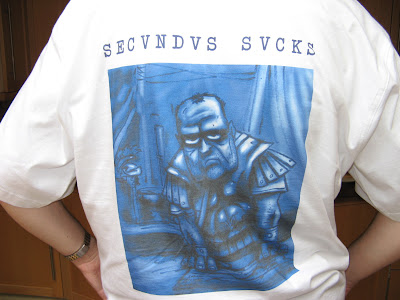 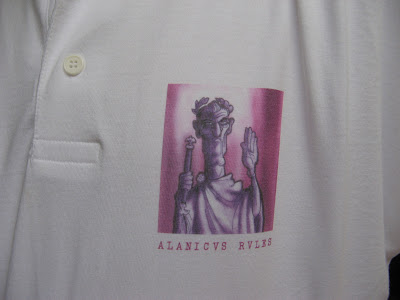 The game was great and led to a really fun day, a few things really came to the fore in the action which added to the enjoyment. I think one of the greatest additions was brought about by giving the Centurions names and personal stats. I had done this months ago ( It's on the Blog somewhere). By going through a Roman book and giving Characters very simple first names and rolling them on a simple D10 table of modifiers, Characters like Turrentius and the mighty Pulex really came to life and stopped just being figures on a board of hundreds. +1 to weapon skill or +1 to Toughness really helped to flavour these old war dogs and led to some really nice moments within the game. It got to a point where I didn't want Pulex to fall and when he struggled through against all the odds I was amazed...a real hero. My heart was in my mouth for most of his dice rolls towards the end, really good fun. 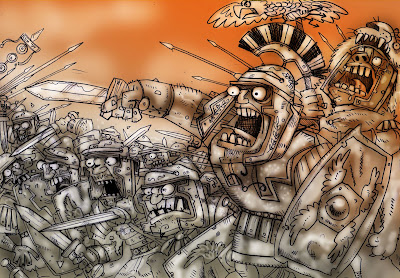 Another nice touch was the use of the 'Heirs of Caesar' rules. These give Legionaries the choice of various fighting styles which really give a sense of realism to the game and allows you to tailor your tactics to fit the different situations. 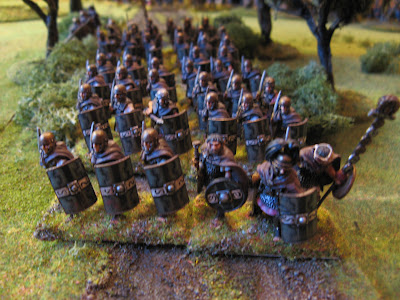 The first option is called 'Parry and Guard'; this gives the legionaries +1 to their armour save. This allows for a unit to hunker down and hold out better for assistance to arrive. Then you have 'Independent Swordsmen'; this gives your legionaries a +1 to their weapon skill for when they take the fight to the enemy and fight aggressively (only one rank can fight). The last is 'Relief'; for three rounds of combat two ranks can fight at once, after three they go back to one rank. This gives the unit a chance to rain down blows on an enemy for a short time to overwhelm them if time is growing short and a breakthrough is needed. These simple little touches really improved the feel of the combat and lead to holding actions and aggressive all out assaults during the day.
It wouldn't be a war game if I didn't mention the dice rolls during the day. Both of us were stunned and couldn't believe some of the rolls that day, they will be set down in history. 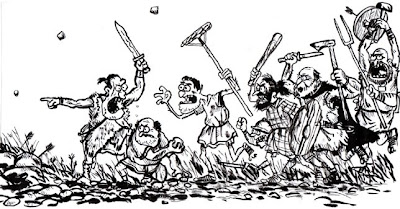 The luck of the Slaves from the Narona quarries will live on in legend. Time and time again they held against the tough Legionaries of Alanicus. Their Leadership was five and so when they lost a round of combat two dice were rolled. If the score was higher they would of broken and ran. They found themselves in this position three times during the fighting but the Gods were with me and each time they just managed to hold their ground and fight on. It was an amazing game! Our games are few and far between these days but what a game. When the Legionaries finally broke and ran, It was the stubborn Slaves who caught them and butchered them to a man. 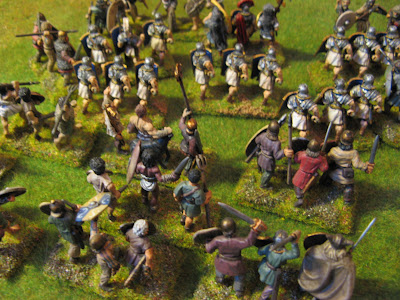 I hope you have enjoyed following the battle as much as we did playing it and maybe you have even been inspired by it a little. 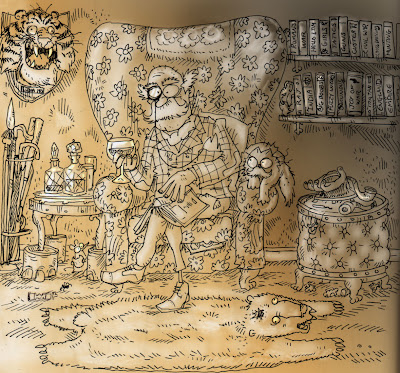 Events in the real world have played havoc with those in the Campaign, but I'm sure the clash of sword on shield will be heard again soon. Secundus for Emperor!
Posted by Secundus at 10:32 am 9 comments:

Tullus and the Senate 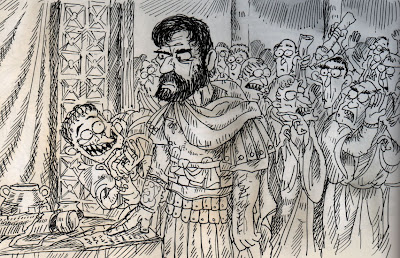 The news of the Secundian victory put a black cloud over Tullus and set a cat among the pigeons of the Senate. Tullus had won a close battle at Valentia a few months before and had hoped for a quick victory over the shattered Secundian army. Now the Secundian General Flaccus had brought home an over whelming victory at Narona, Tullus knew the Secundian cause was far from dead. The news of the battle in Dalmatia had even got some senators motioning for peace terms with Sucundus.

Tullus's idea for a quick war was vanishing before his eyes, when he had backed the Senate and marched to war, there had only been Secundus to worry about, now there was Alanicus also. Tullus started to grow tired of this contest of egos and the constant nagging of the Senate. He longed once more for the quite life and the fields of Spain. There were murmurs in the Senate.
Posted by Secundus at 5:39 pm No comments:

Secundus hears the news from Dalmatia 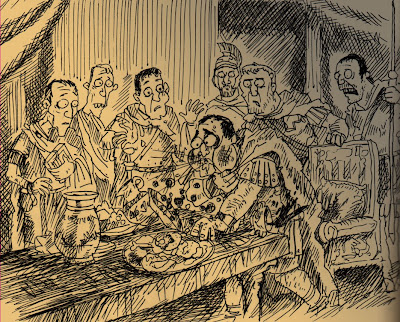 Secundus was delighted at the news of Flaccus's success in Dalmatia.
Posted by Secundus at 5:31 pm 1 comment: 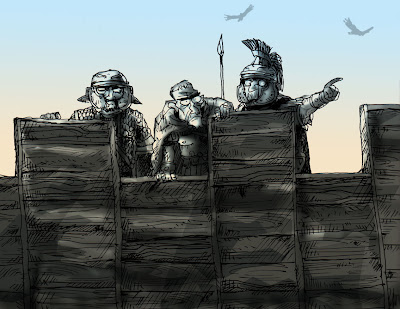 Alanicus was seeing to his newly arrived Syrian archers when one of his Sea Captains brought him news of the crushing defeat on the fields of Narona in Dalmatia. Alanicus didn't act in his usual hot headed way, instead he took the news very calmly. He listened intently to the reports of the battle and asked many questions before retiring to his private quarters for the rest of the day. His Commanders found this new calm Alanicus even more terrifying than the hot bloodied one. A deathly silence settled on the city of Alexandria. The mood was made worse when news of the defeat reached the Tullian army camped outside the walls, who raised a mighty cheer. Alanicus didn't sleep that night.
Posted by Secundus at 5:01 pm No comments: 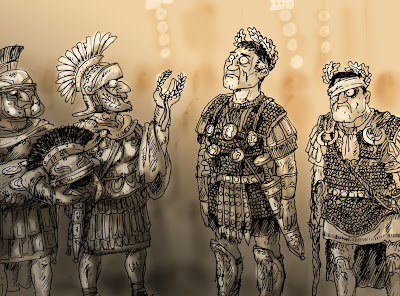 Following the battle of Narona, General Flaccus decorates Centurion Pulex and other officers of the 1st Cohort with awards for valour and promotes Pulex to the rank of Prefect within the Legion. Now that Pulex had become an over night hero and was the talk of Rome, Flaccus thought it best If he was taken off the front line, knowing his death could be devastating for the morale of the army.

Pulex welcomed his new pay rise and office within the Legion; the way he saw it, he had used up all of his spare lives at Narona and didn't want to tempt the Gods any further.
Posted by Secundus at 4:32 pm 1 comment: 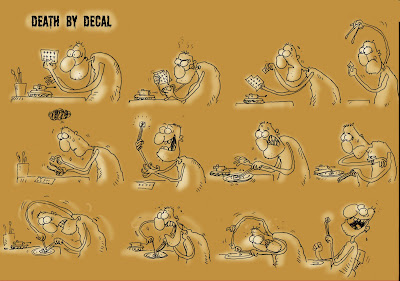 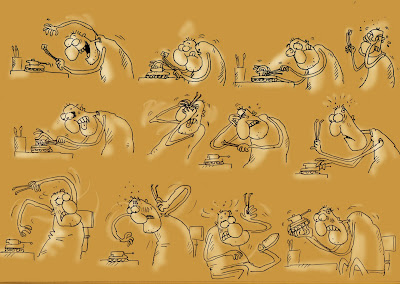 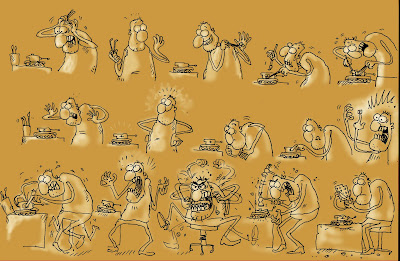