Wolf Riders arrive on the horizon 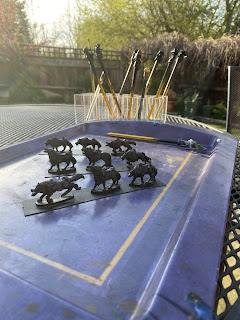 I may be having great fun making and painting  up Boyne infantry but the call of the wild beckons me once more. I did make a start on a unit of Wolf riders a few months ago but the house move put everything on hold, now I’m settled, it’s time to dig them out again. 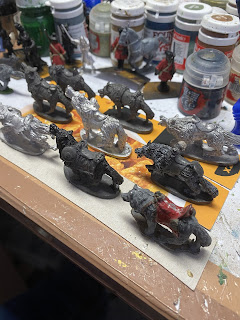 I’m not a fan of the plastic Oathmark wolves and so started looking around for other options. In the end I came back to my old Grenadier sculpts from the Eighties. I have very fond memories of these figures and some are still covered in my enamel paint from when I was about fourteen years old.
Since the sculpts came out, there was another range released, still sculpted by Nick Lund but this time the figures were slightly larger. This new set was released in the early Nineties and is very useful, as the larger wolves can be used for bigger mounts of the leaders. 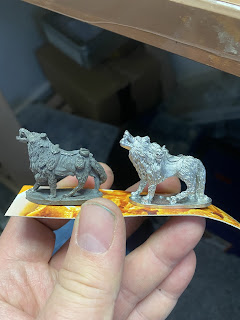 I bought the larger Wolf off eBay last week and it’s very interesting, it’s obviously based on one of the originals from the Eighties, but has been beefed up. This was a nice find and will become the leaders mount.
The sculpts are very nice I think and sum up the essence of wolves very well. The long snout and long fore legs with big paws are better than a lot of more recent sculpts I think and have a lot of character.
The only slight negative aspect maybe is they are laden with equipment. The Wargs of  Tolkien let the goblins ride on their backs as a kind of mutual arrangement and would definitely not allow equipment to be packed onto them. However, maybe they quite like the idea of having a bit of extra armour on them...anyway, they are definitely the best large Wolf mounts around at the moment that I have found. The bonus being a lot of them are free, being figures from my childhood.
A unit of twelve should be enough and due to the size of the wolves, they will probably be classed as an assault unit rather than a scouting one.
Posted by Secundus at 11:40 am

You might find the later ones available from Folorn Hope Miniatures... they have a lot of Lund's Grenadier sculpts.

You'll need 15 for Oathmark though;)

Looking nice and I look forward to seeing them finished.
Neil