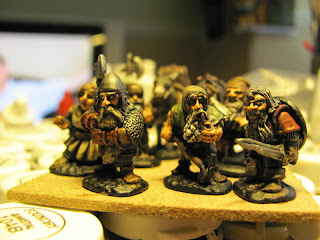 Right well then, here they are, a party of greedy Dwarves. As with all adventure parties...when word got out of riches to be made, the number of the party seemed to double. I had planned on around four with one fully loaded pony, but this later grew to seven (funny enough) and an extra donkey for good measure.

Even though the armoured Halfling was painted and varnished and ready to go, he had to be left behind due to space restrictions. In other words...they left without him! 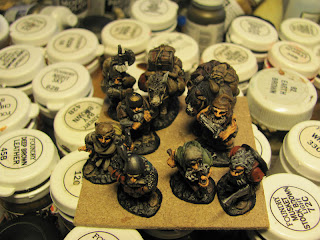 I had great fun planning and putting together this base. I tried to tick off all the boxes that would make a good adventure party, so we have a cook, a thief and an old adventurer who has seen better days. He looks like he moans a lot but every party needs one of those. A bit of hired muscle and some brainy types. 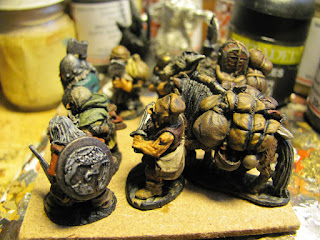 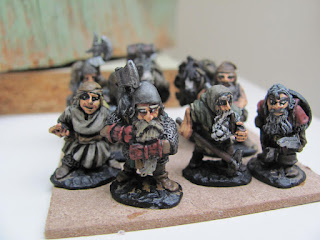 Out in the day light at last. A very rare female Dwarf armed with a meat cleaver and various food stuffs. 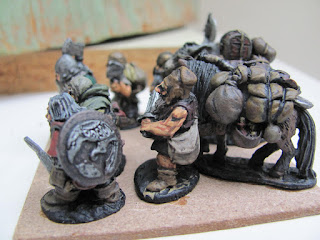 Here is a side view showing the lightly armed thief with his swag bag and dagger, the fact he is next to the pack pony and the loot, has not been lost on the rest of the party. Keep an eye on that one. 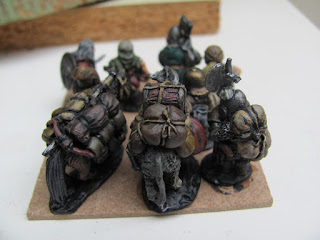 I liked the fact that the pack pony had a crossbow in it's bundles, very dwarven I thought. 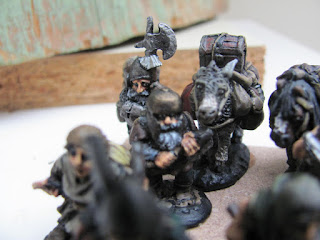 As you may have noticed all of the figures are ancient citadel sculpts, these two in particular are very old. I recognise the fella with the poleaxe from the Dwarf King's Court box set. Although this one has been resculpted with a pack on his back. He is the old worrier and fits in nicely with the character of the base. 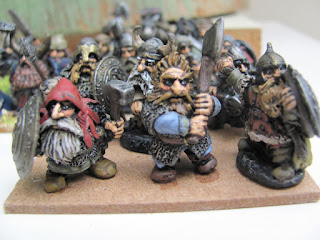 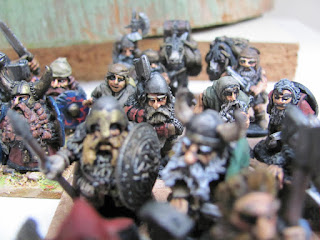 A throng of Dwarves, the party is lost in the rabble.
To paint them I used Foundry Flesh A and B only to shade their skin. I practiced leaving black undercoat when I painted them and was pleased with the effect. The eyes took a little time compared to what I'm used too. After I had laid down the base colours I gave them a wash of GW brown Ink and then highlighted with the base colour again. Nice and quick and simple. Leaving the black undercoat was something I have been planning to do for ages and finally got a chance to try it with these Dwarves. I think it's very effective from a distance and put a lot of fun back into the painting process for me. I also had great fun painting the faces and leaving crease lines around the eyes to age to the characters. 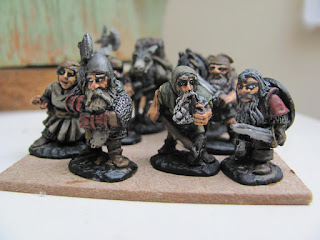 I thought I had better give the party some beef, so at the last minute recruited the guy with the axe to take point on the base. Anyone attempting to cut their way to the swag will have to come under his swift axe strokes first.

Then there's the brains of the outfit, The two experienced and wise looking gents discussing which way to take next. Some of these old eighties figures are just overflowing with character and it's great to dust them off and use them after all these years. 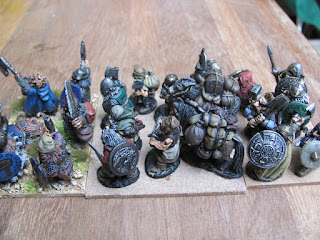 They're off through mountains cold to dungeons old, with more than a little back up it would seem. The adventure party has been mounted on a 60mmx60mm base to give me a bit more room to play with. In HotT it's just the frontage you have to worry about which is 60mm. I'm not quite sure what game I'll end up playing with these mini's but as long as the frontage is the same I don't really think it will matter too much. 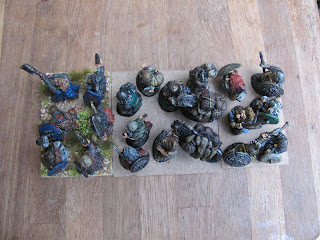 Next up I need to base the last two bases painted, the boring bit I always think and so leave it until I have a few to do...yawn.
Posted by Secundus at 2:33 pm 11 comments: