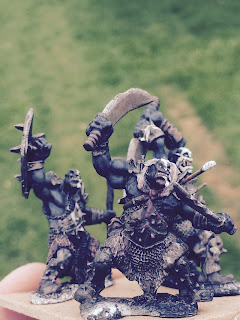 Finally got some of these huge Black Uruks based up. My idea for these is that they will be the bridge takers and shield wall smashers that run before the army of Sauron. They are large Reaper Miniatures 'polymer' models again and tower above the other Orc figure ranges. 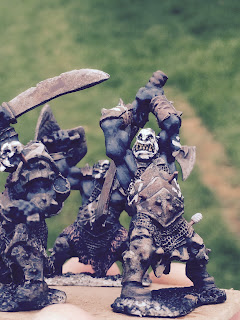 These beserkers needed some kind of face paint to make them look totally crazed. I chose some very crude white marking harking back to the LOTR films. I think It helped, some of them have also gorged on blood to work themselves into a frenzy. 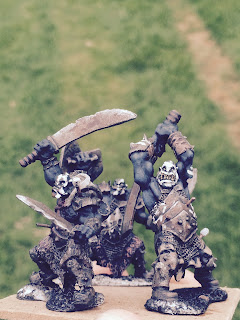 The paint used was Tamiya Field grey (FX-50) with a black ink wash over it to darken it down. A highlight of  the same Field grey was then added again followed by another slightly lighter one after that ( tiny bit of flesh colour mixed in to Field grey). The rest of the model was just given a quick base colour, washed with black then highlighted once. 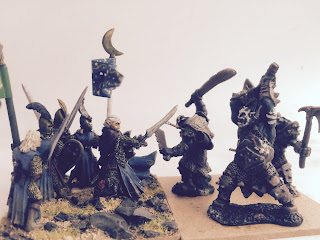 Size guide with the Elven host, These large figures will have two hit points each in Dragon Rampant with six in a unit. To help with their unstoppable look, I have peppered them with arrows, many have been snapped off in contempt. These frenzied butchers stop at nothing and feel no pain, handy when fighting Elves and their constant hail of arrows. 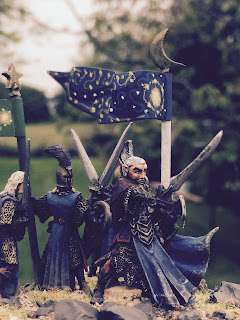 The Elf lord is not impressed as he gives the signal for another volley.
Posted by Secundus at 6:43 pm No comments:

The White Warg and her Retinue 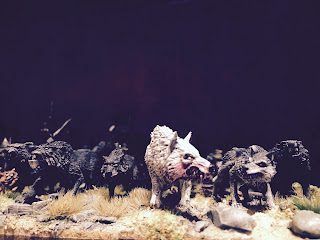 Here is the finished base of the White Warg, she leads a small group of wargs and large wolves into battle. Just one look and a snarl from her keeps the pack in line. This group of Wargs will lead the huge wolf army, consisting of many packs.

Using the Dragon Rampant rules, her unit will be classed as 'Greater Warbeast 'with six wounds, one for each hound of Sauron.

Her wolf units will be classed as 'lesser Warbeast'. The units will have six wounds each, although I have created the units using ten models as It looked more like a wolf pack than just six figures.

I figure that wolves are quite wily and even though they number many they won't hang around too long If the fighting gets too fierce and turns against them. So a group of ten wolves will slink away once four or five of their number have been slain.

The White Warg is a Reaper Bones 'polymer' model, so was a bargain price for such a large figure. I found the secret with these Reaper Bones models is to give them a grey undercoat first, this goes some way to stop the paints 'sweating' and going shiny, as I have found with the others.

A really good matt varnish is strong recommended with these 'polymer' models. I have just bought some Testors matt cote from eBay and It seems to do the trick. Windsor and Newton do another good matt spray varnish.
Posted by Secundus at 6:26 pm 1 comment: