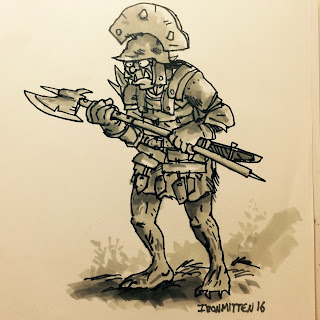 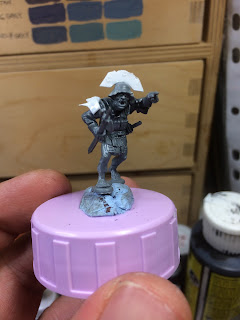 I have been having great fun with these Warlord plastic orcs and various Perry plastic box sets. To add a little variety to the unit I bought some 'War of the Roses' plastics for their nasty looking bill hooks. Again they work well with the orc torsos. The orc captain above is styled on the various captains taken from the Peter Jackson LOTR films with the side crest like a Centurion. 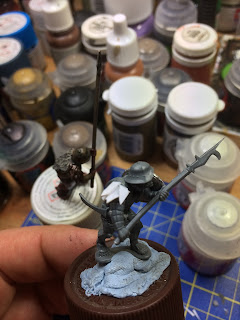 Another little thing I'm excited about is the discovery of plastic card. I did buy some thick stuff but it proved a little too thick to cut into detailed shades, however, I found some really thin stuff which is excellent for armour etc. Orc armour is pretty rough and ready so it is great to mocking stuff up, the crapper the better with orcs. 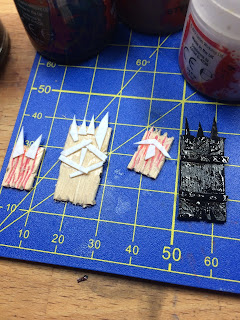 Here I am also using the thin plastic card to create shields. The wood is cut up lolly sticks with the tiny rivets being created by Gel super glue. Looking forward to painting this lot up and seeing what they look like.
Posted by Secundus at 2:52 pm 7 comments: 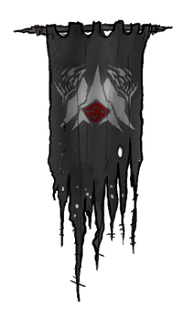 Found this great standard design on the internet, could prove very useful. Creator unknown.
Posted by Secundus at 1:20 pm 6 comments: 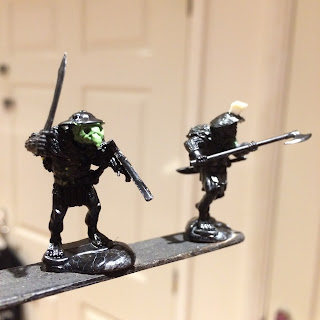 Just trying a few different ways to introduce character into a unit of Gundabad orcs. A crude 'green stuff' face mask and helmet blades made from plastic card. The helmet blades are a nod to Peter Jackson's films and I think they will look good once painted up. 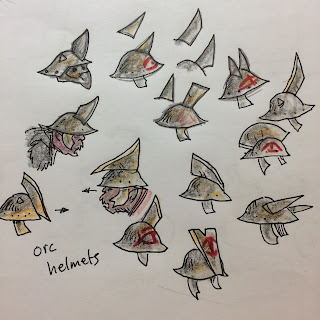 Got to Love Charity Shops! 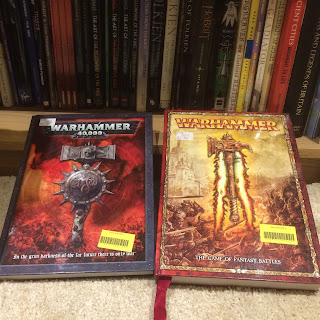 My Wife snapped up these two amazing bargains in a local charity shop. £4 for the 40K and £5 for the massive WarHammer book. I don't imagine I will get around to playing either soon but they are a wealth of artwork and eye candy. I think they must be quite recent as the figures inside are very current. I feel sorry for the guy who had these then decided not to play it anymore, they have hardly been touched. I wonder if these books being dis-guarded are the result of the Age Of Sigmar...properly not who knows.They have found their way back to the Imperium now. 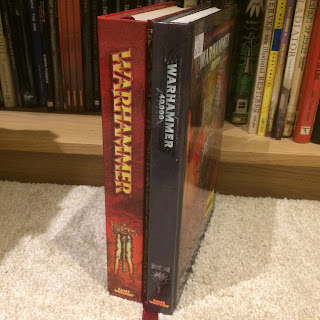 A steal though which ever way you look at it, brightened up my bad day any how. I was interested to read up about the races but found the chapters short and full of new guff which didn't really get me.
Posted by Secundus at 12:34 pm 5 comments: 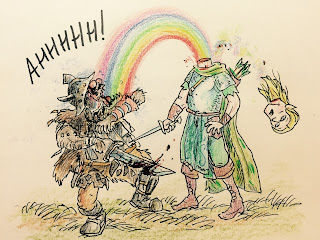 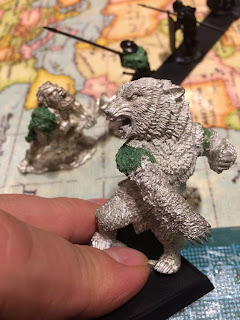 I decided to issue a 'HOLD' order on any ECW activity until Pikeman's Lament is released in January.

So all my ECW stuff is packed away and out of site which feels good as now I can concentrate on the Hobbit Project again and start chipping away at these lovely armies. Above a fantastic Dire bear from Reaper Miniatures is having his joins covered ready for his role as Beorn. I really want to paint him in brown but Beorn was actually meant to be black, maybe I will give him a brown muzzle to break up the overall colour.

In the back ground is a Ral Partha Ogre who will be doubling as a Hill Troll, there will be four of these on two bases for Dragon Rampant. together they will act as a 12 point bellicose foot unit so each Hill troll is 3 hit points each.

I don't really intend to use the point system from the rule book and will tailor the units to fit the feel of  Middle earth better. For example the Hill Trolls will end up being around 9pts a unit, with armour ( thick hide) and Great strength being added to them.
Like wise my Dwarves (8pts) and Elves (7pts) will come in very pricey compared to the massed units of Goblins (4pts) and Wargs (4pts). Really looking forward to getting some more units done and trying out some different troop types in the game. Wolf riders are on my list... 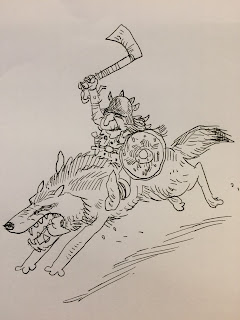 Thinking I can use the Plastic Saxon box set from gripping Beast to add some variety to the weapons of the Wolf Riders, as there are only three sculpts from Ral partha ( the best Wolf Riders around at the moment).
Posted by Secundus at 1:34 pm 9 comments: