All quiet along the Potomac tonight. 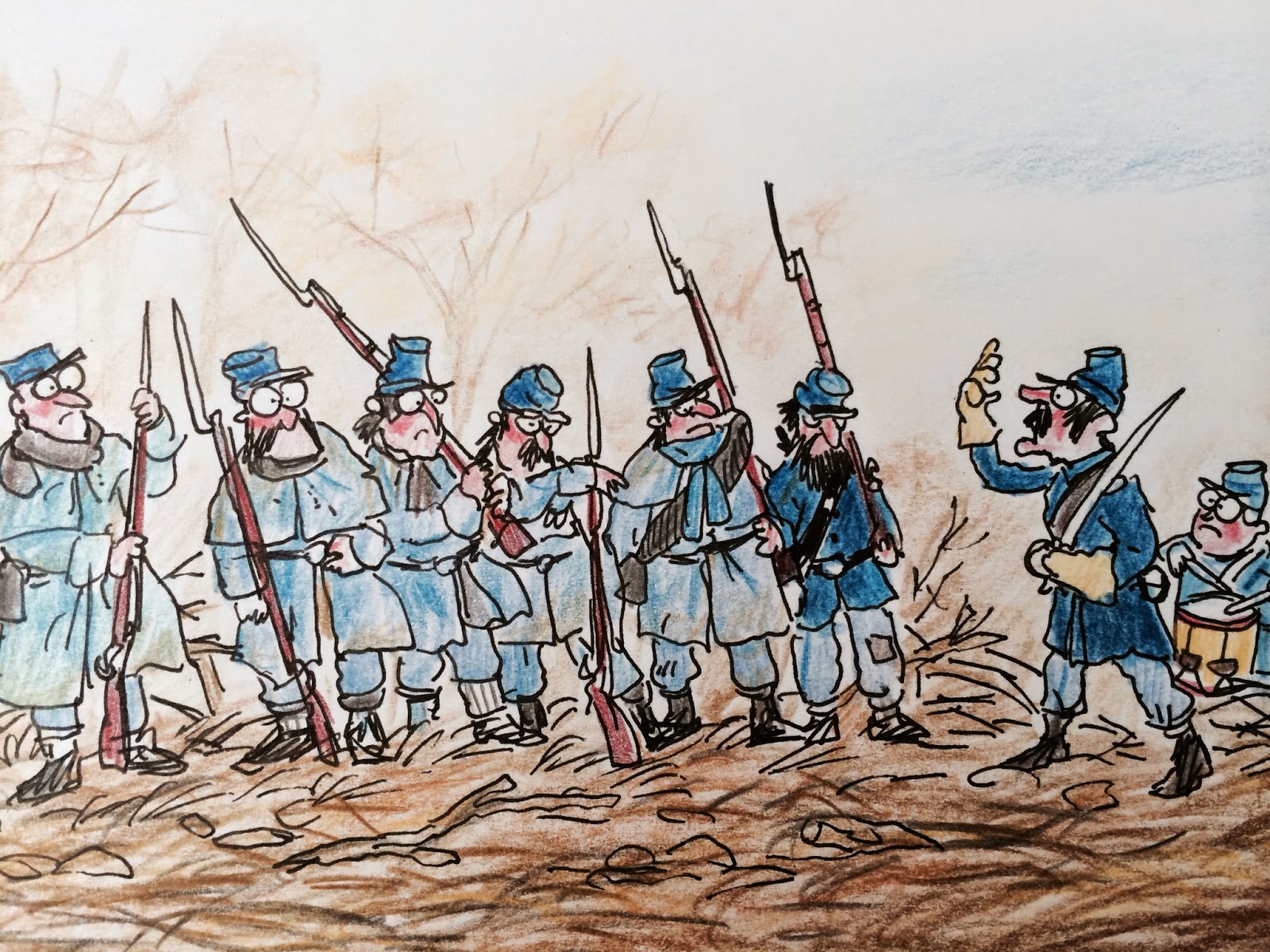 A Federal officer gives a rousing speech about protecting the Union to a group of tired pickets by the Potomac river, winter 1863.


This is an experiment with a new technique. This is a tiny image coloured with pencils and photographed with my i phone. The picture is then sent to my hotmail and down loaded, saved onto my computer, then up loaded to my Blog.

The colours aren't as sharp as they would be If I were to scan it in to Photoshop, but It does allow me to draw, colour and post cartoons quicker and easier. Over the last year or two I have struggled to find time to add any new drawing to my Blog due to not having much spare time, I'm hoping this quick technique will allow me to post more pictures in the future.
Posted by Secundus at 5:22 pm 6 comments: 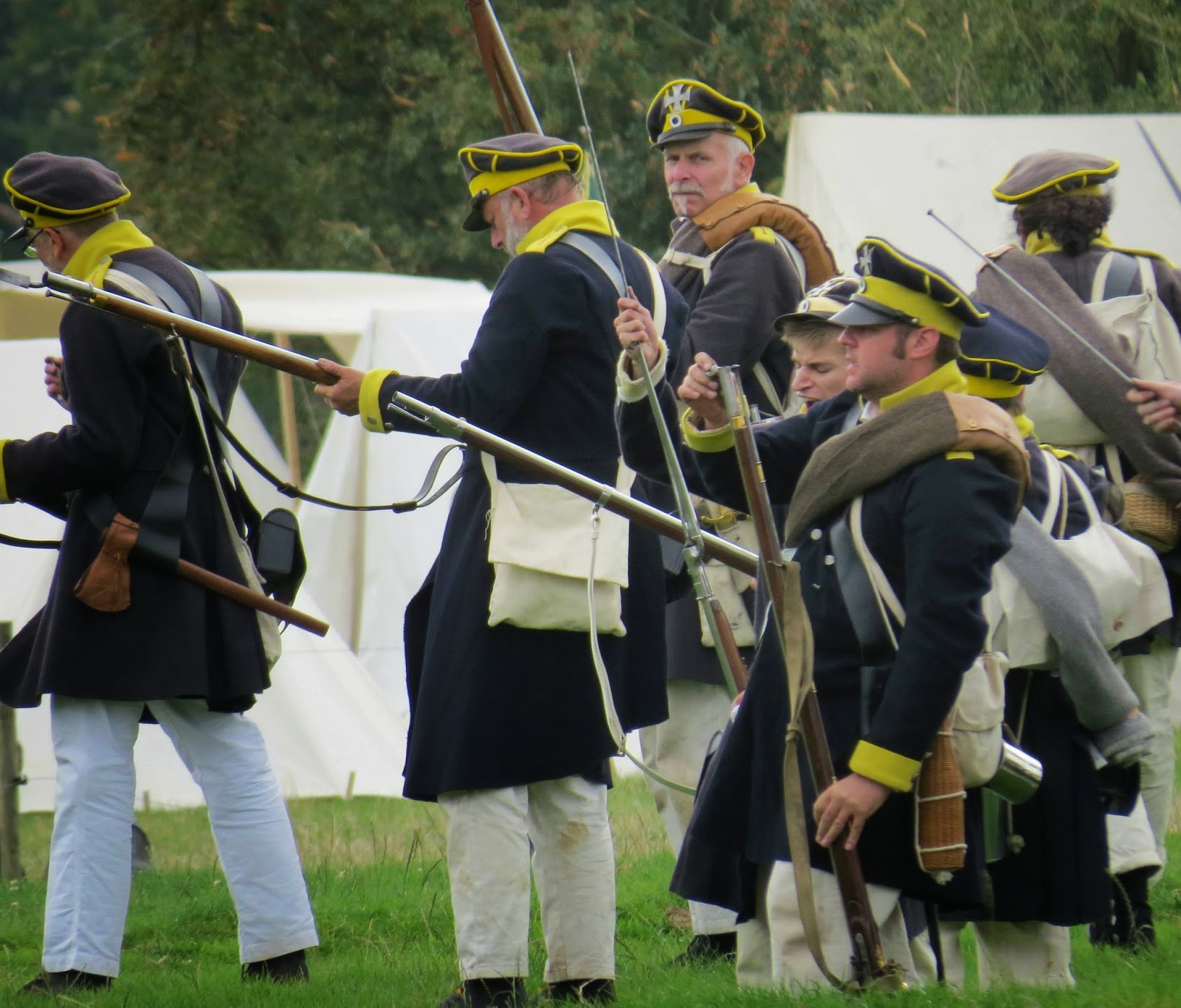 I have just got back from another great weekend campaigning in the 18th Century. Lots of fun and just a little bit scary... 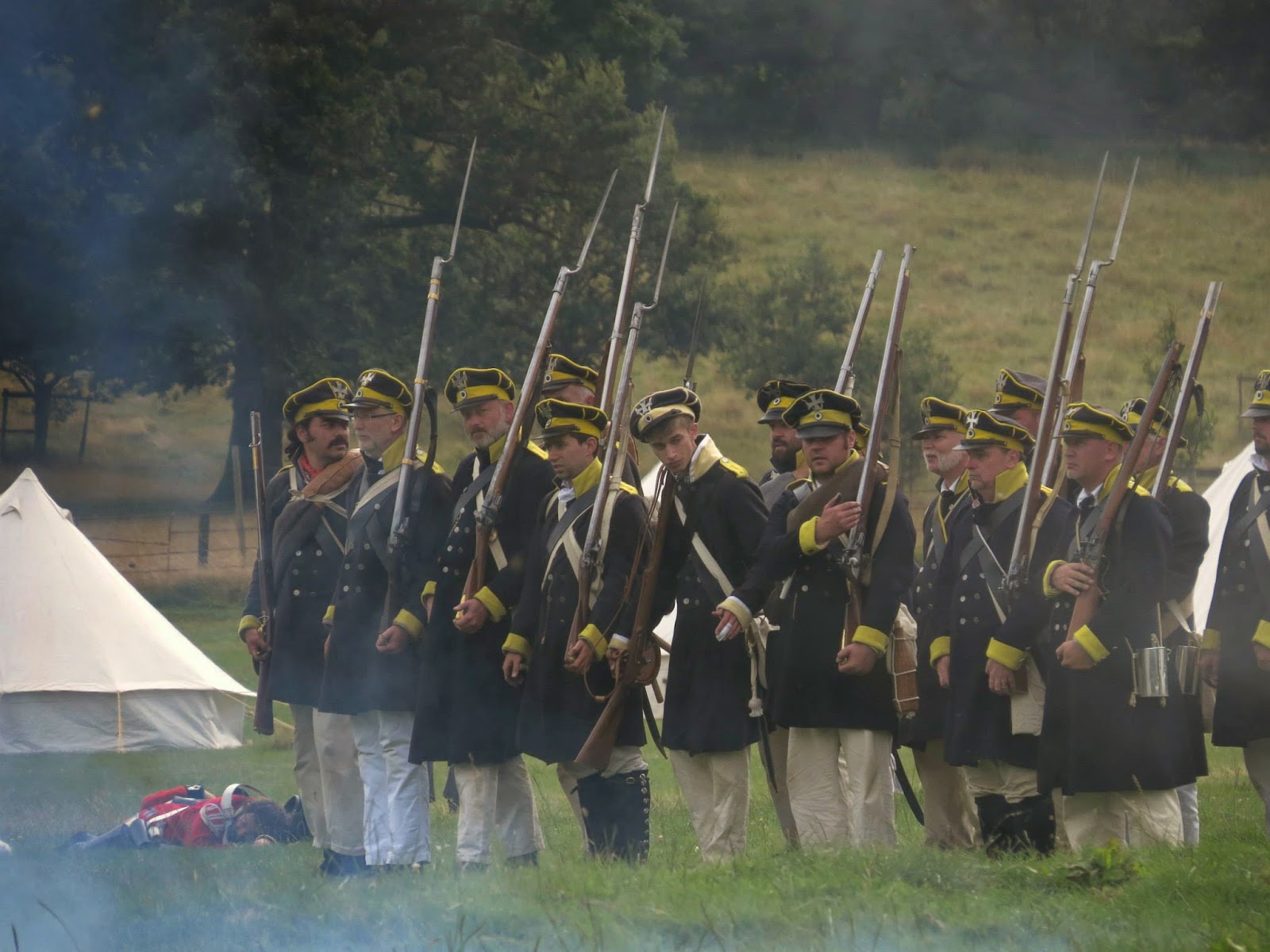 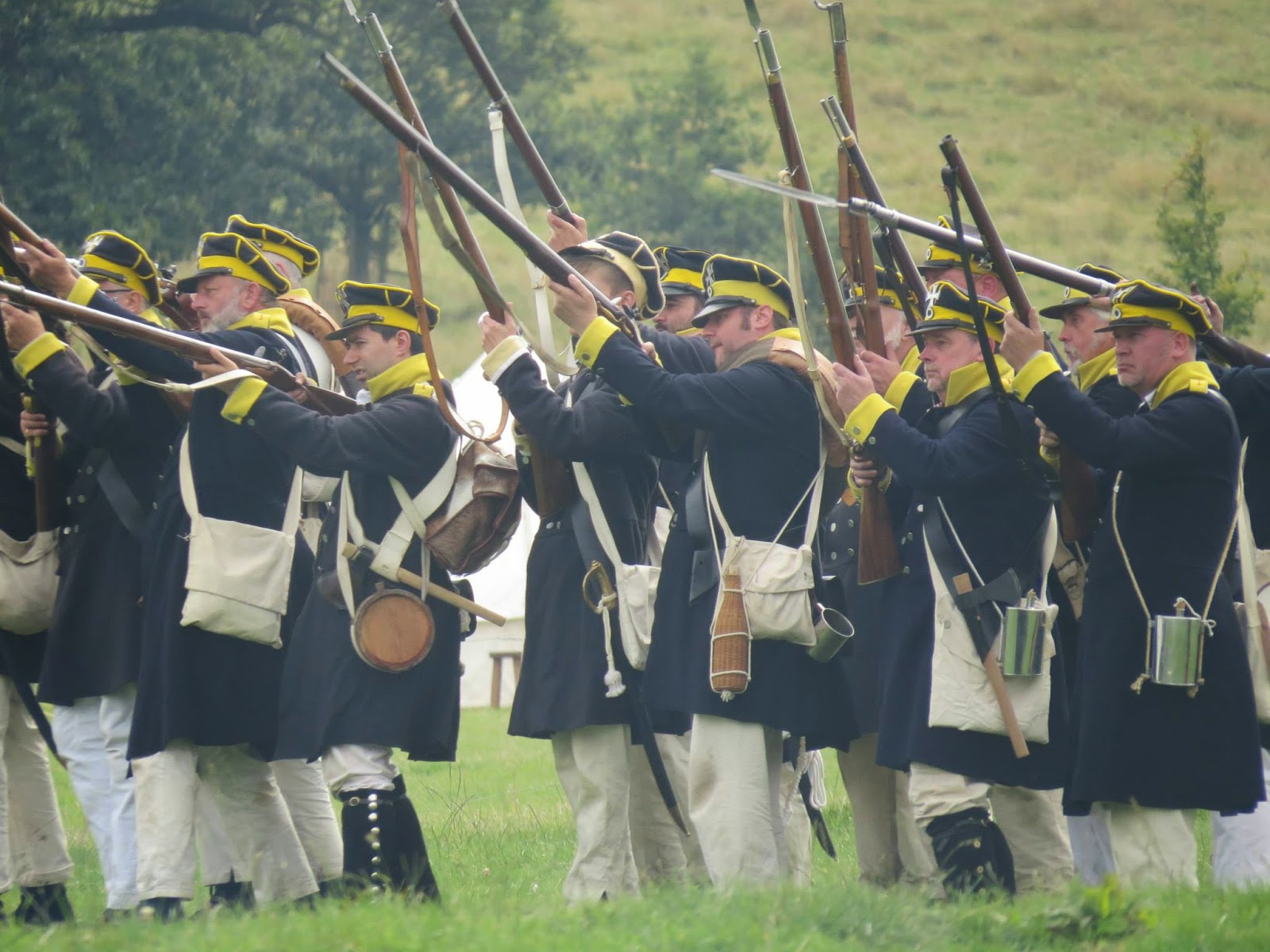 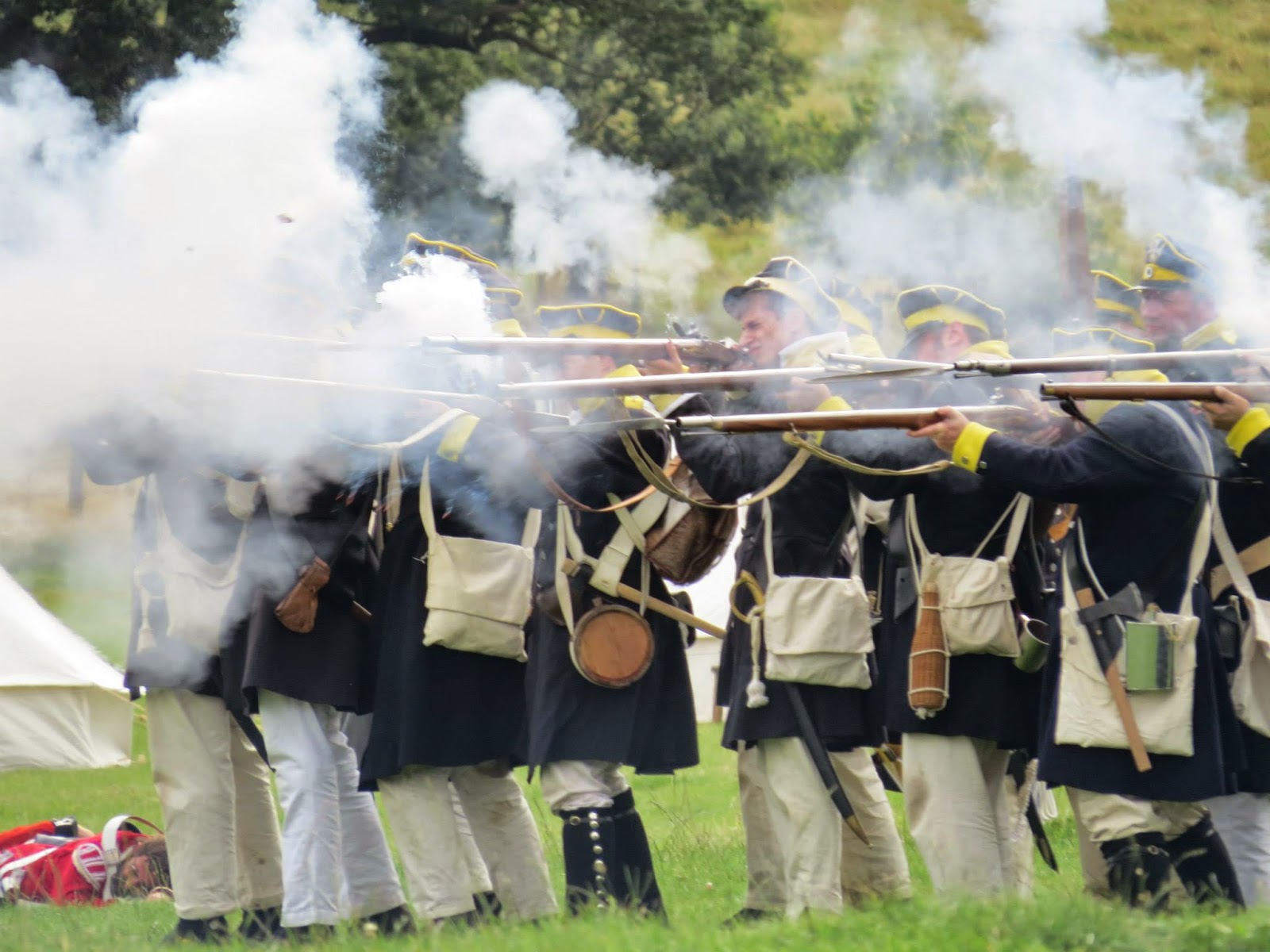 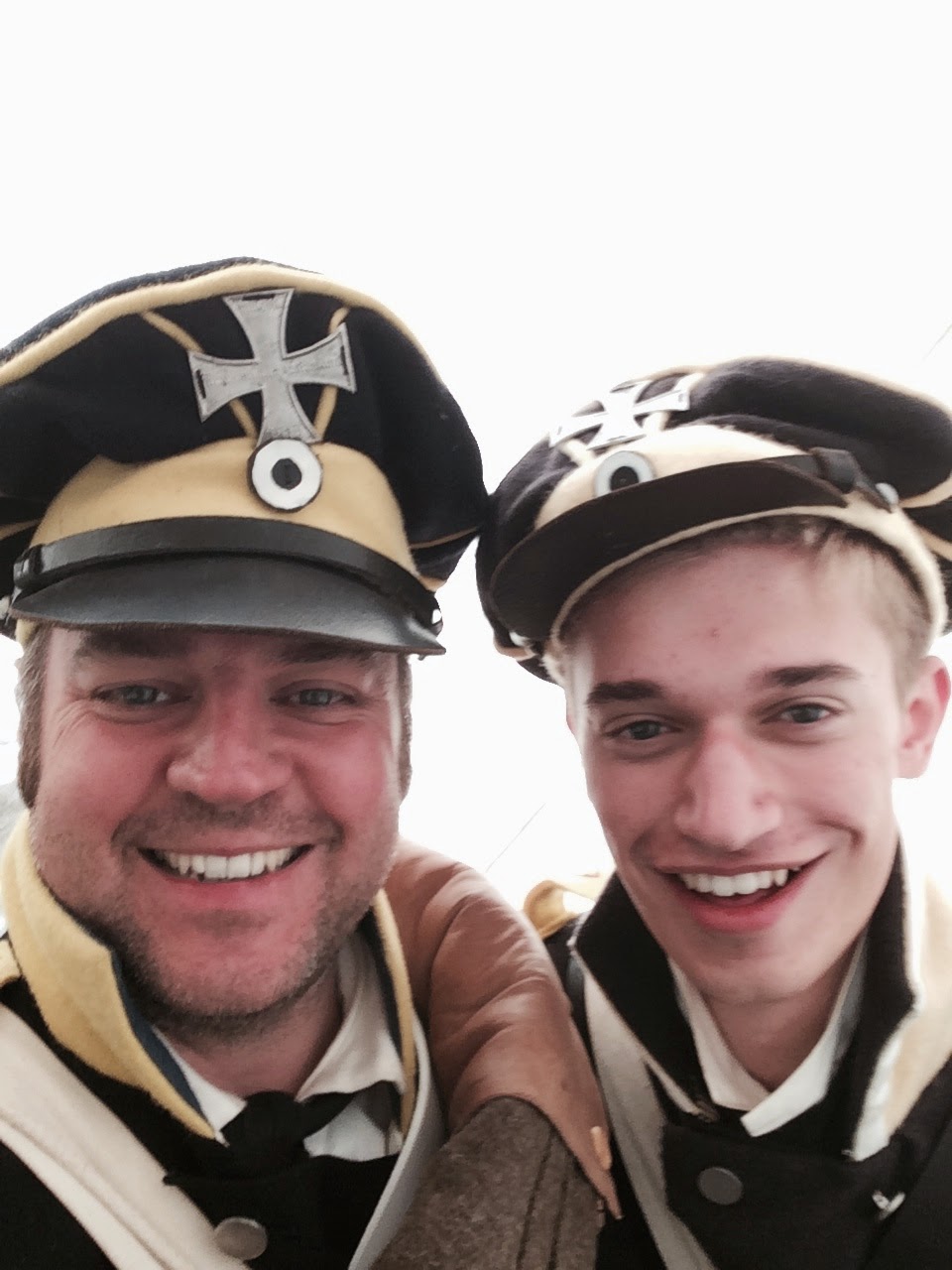 The Blue and the Grey 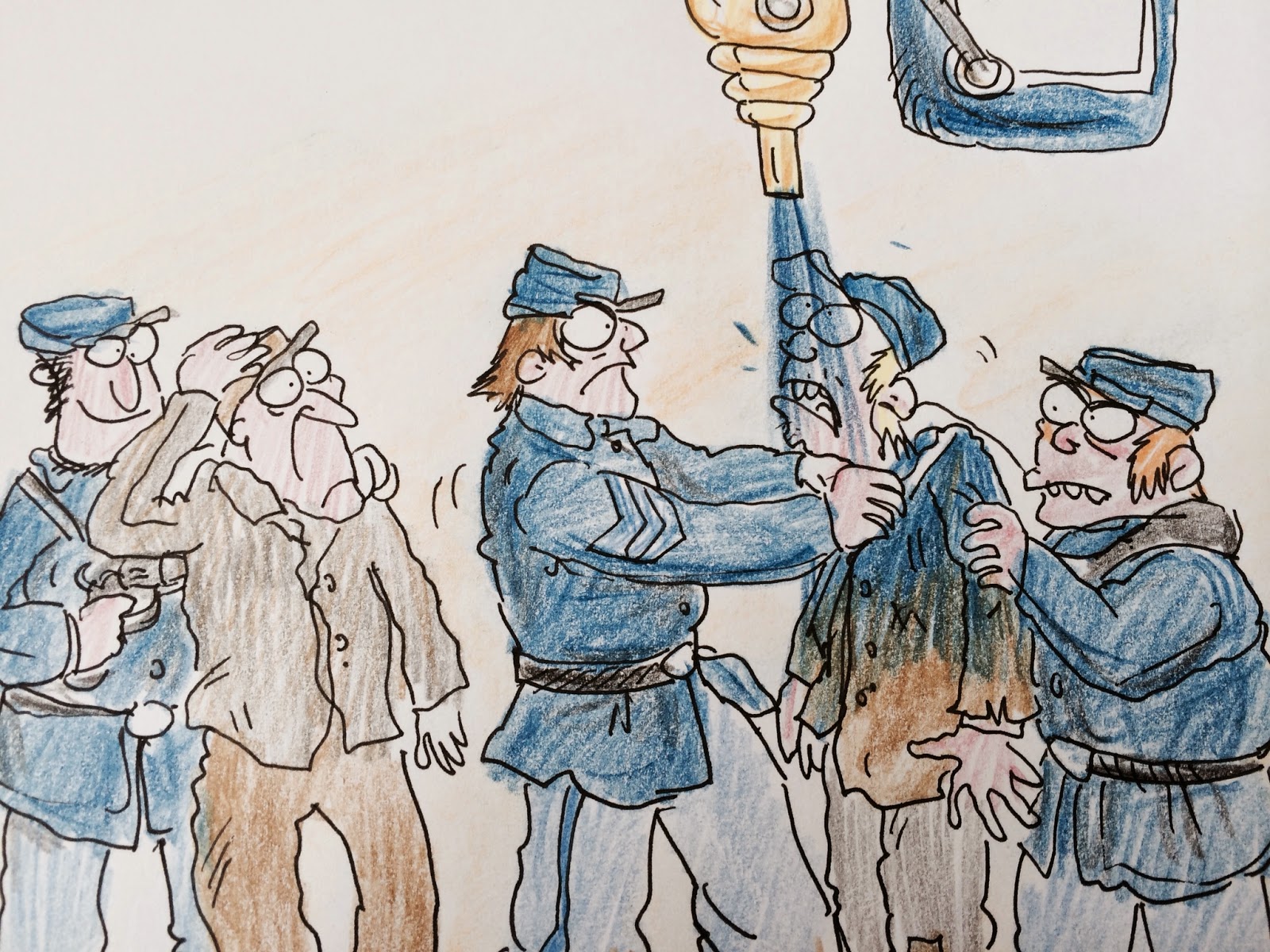 In order to find more sack coated Union Infantry I have been forced to crack open the Confederate box and start to repaint old sack coated figures. This of course didn't go down well with the poor individuals involved but this is war and sacrifices have to be made.
Posted by Secundus at 2:38 pm 5 comments:

Painting the masses of figures needed for RFAF 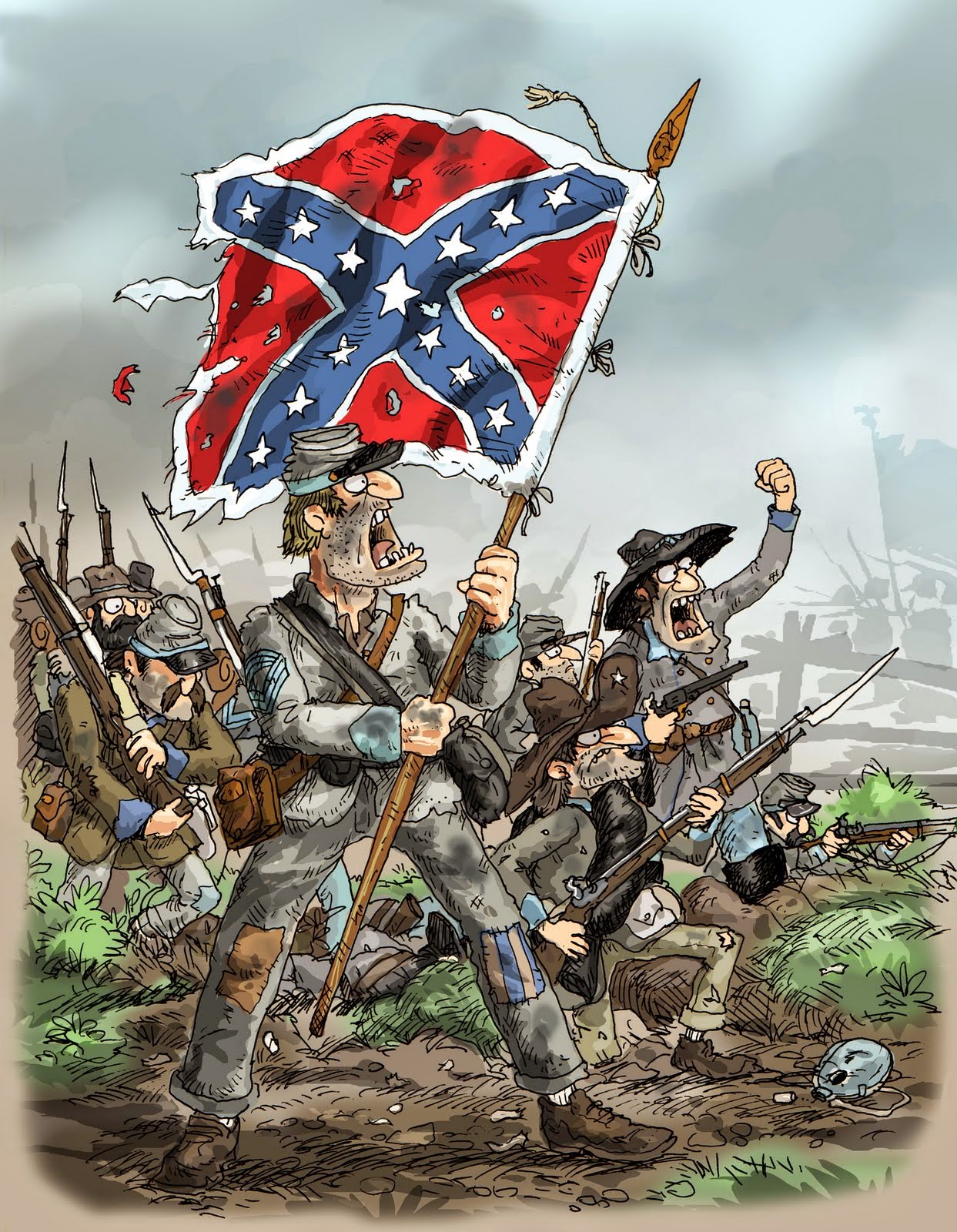 This week I have been gearing up to paint another horde of Union troops for Regimental Fire and Fury. Just checking through the rules and what I would need to play the scenarios, I was amazed to see just how many figures one would need for a game. Games featuring 175 stands for example, now considering there are three figures per stand, that's a lot of painting to be done.
I have seen on other Blogs that some 28mm gamers use bases with only two figures on and this certainly helps in raising forces quickly, but I like the packed, crowded battle lines so will stick with three per base. It says early on in the rules that they were designed for 15mm which does kind of explains a few things. 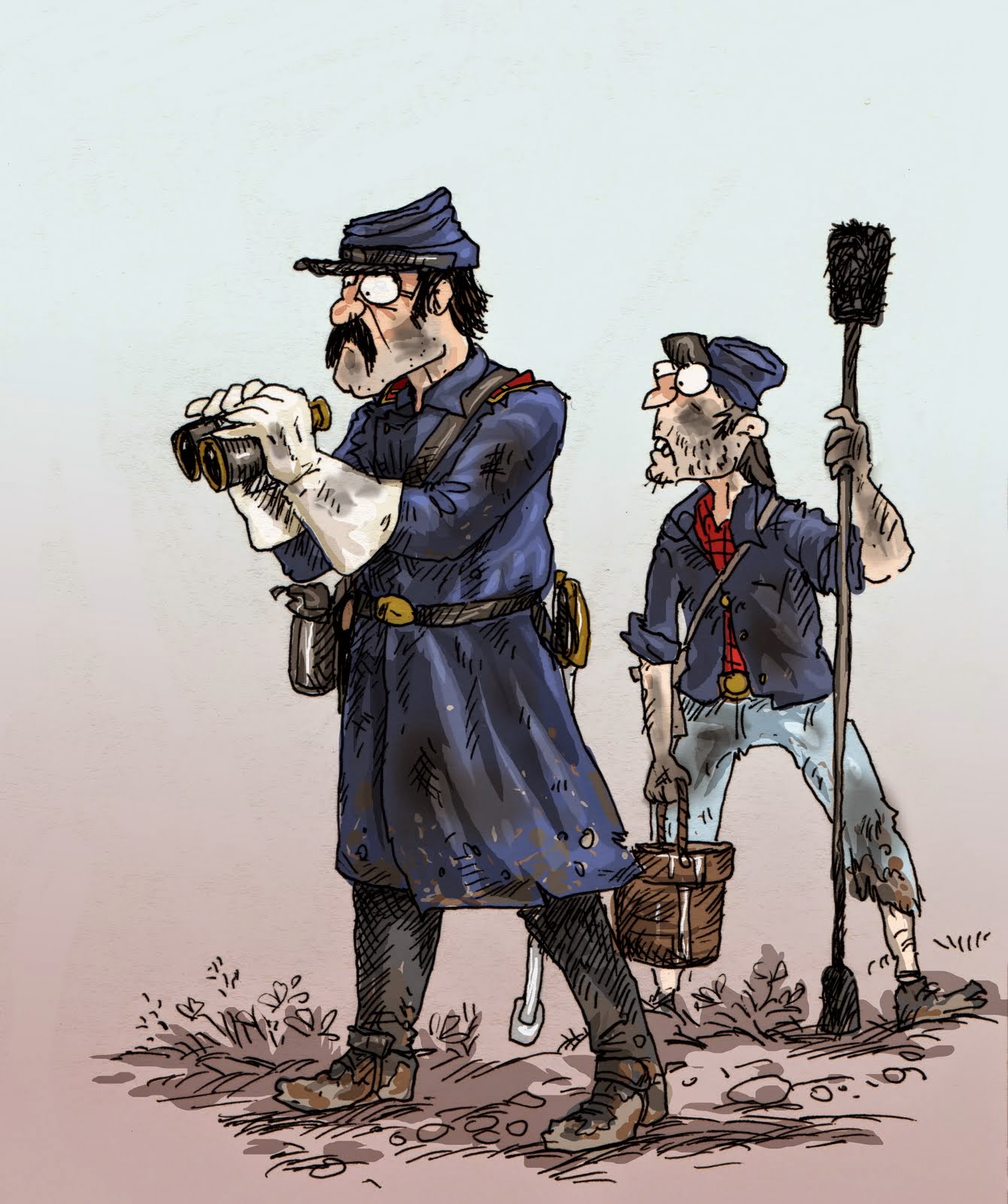 The one thing I do love about the game is that It tells you to paint up generic armies of Union and Confederate, so they can be used for any unit. I like this as It gives me an excuse to go crazy and paint buckets of lead not worrying about what Corps they belong to or special regiment. Just loads of dark blue and sky blue is needed to start the mass production. Saying that I have just received my favourite regiment the 14th Brooklyn from Forgotten and Glorious. This and of course the Iron Brigade will be the only units in the army that are based on renown regiments. I'm looking forward to it and It will come as a nice break from painting dirty Orcs.

I plan to paint on a big scale due the the mass of figures I will need for a big game, so will aim to paint in batches of 60 figures. I will keep everything simple with just a few colour changes to trousers etc and not go too crazy. Hopefully that way I can churn out the numbers quickly. Oh well It's a thought anyway...

I'm still going to stick with my new rule of only painting figures with Sack coats and Frock coats for Union troops. This may mean I will go back and try to tweak some of my earlier painting this year.
Posted by Secundus at 5:08 pm 2 comments:

This week I have been mostly thinking about the iron Brigade... 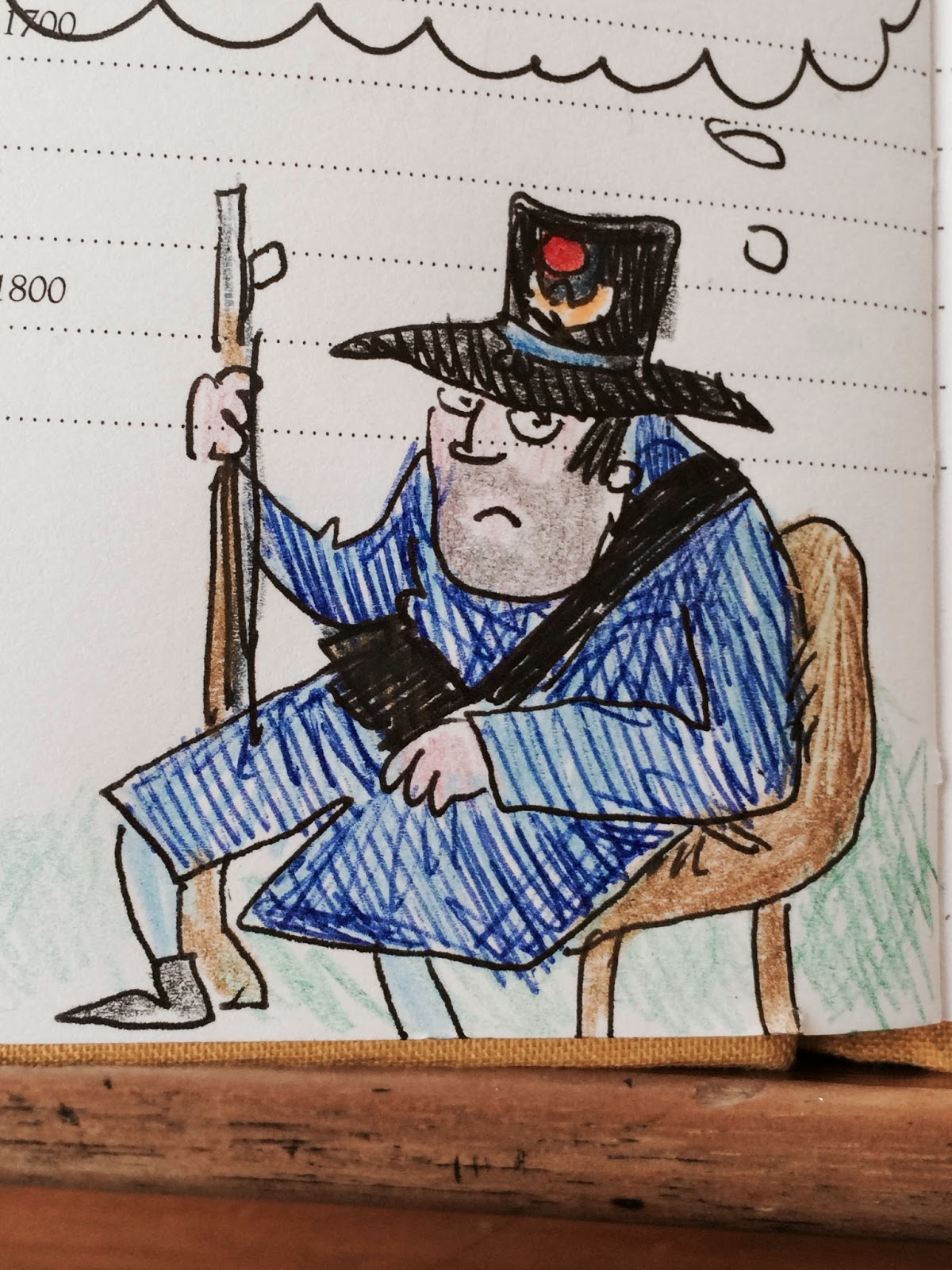 As the months roll by my mind has started to think about all things Civil war again. I have been painting up rail fences and planning new regiments for an paint up grade. The famous Iron Brigade is one.

I have always loved this Brigade with their frock coats, black hats and white gaiters. Still have a few Orcs to finish off before I can allow myself to start anything new.

I do love painting ACW though , It has the best of both worlds as far as painting is concerned. On one hand you have the simple two coloured Union troops with their dark blue sack coats and sky blue trousers. The shear numbers that can be painted in one go is a joy to me. I still get a thrill of owning big armies even though I hardly ever use them, must be the child in me.
Then on the other hand you have the multicoloured Rebs with their greys and browns, everyone's a different character in his own right. Pure joy!

I've just worked out after painting the ACW for many years that sack coats belong mainly to Union troops and frock and shell jackets to Confederate. I will try to paint up units in the future that incorporate this rule of thumb.  I know there were many exceptions to the rule but this is an idea I will try and stick too.
Posted by Secundus at 3:00 pm 2 comments: