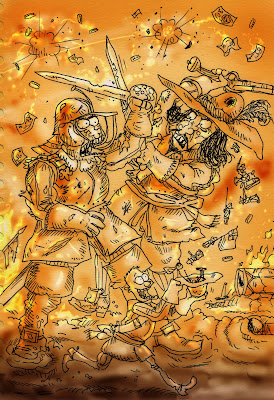 About five years ago I used to dream of having my own small lead figure business, a little family run affair where I could sculpt and sell my own figures and earn an honest crust. My dreams were crushed about a year ago with the appearance of the plastics on the scene. My little fairytale turned into a nightmare as I watched all my figure ranges being undercut by big companies and their new plastic ranges, selling at half the price of mine. Struggling to keep up with the plastic take over I was forced to bow out and sell my fledgling company. Of course this was all a fantasy, but I no longer wish I was a figure company in today's market.

Although I have to say I am delighted to see the plastics and their new prices from a collectors point of view. My wake up call came when I went to buy some a pack of three pack ponies from Foundry, they were charging £11 for the ponies and £8 for the post and packaging! £19 for three bloody ponies! Things had to change, the average gamer with his wife and kids couldn't keep up with this kind of robbery.

Now is a good time to be a collector as the larger companies start to strike back against the plastic movement. Warlord Games have had great success with there Roman and Celt plastics and they are very good, but other figure companies must have felt the drop in sales as Warlord figures stole their market.

The war has truly begun now, as Warlord games prepare to launch their new plastic English Civil war range, Renegade Miniatures have released their Regiment deals. 24 metal figures for £11.95!!! "The quality of metal for the price of some Plastics!" Well, I almost fell out of my chair. At these crazy prices they will steal Warlords thunder and throw a bucket of water over their fireworks. Things had to change, the prices of figures had got out of control and now I suppose we are seeing the long awaited fall out.
What a joyous time to be a collector! I scamper out like a cockroach from under the ruins and devastation and clean up amongst the fighting giants. Price War....what is it good for?....well, about two cheap armies actually.

I have always liked Renegade's Civil War ranges but couldn't really spare the money, now they are giving them away and I recommend anyone interested in the era to go there and have a look.
Posted by Secundus at 10:07 am 26 comments: 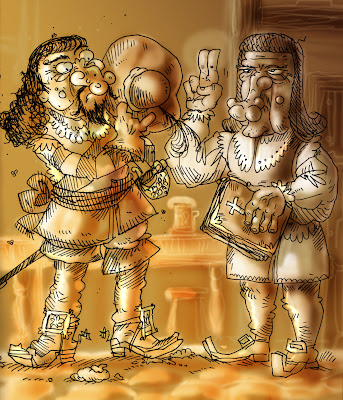 One day Cromwell came to tea.
Posted by Secundus at 11:42 am 3 comments: 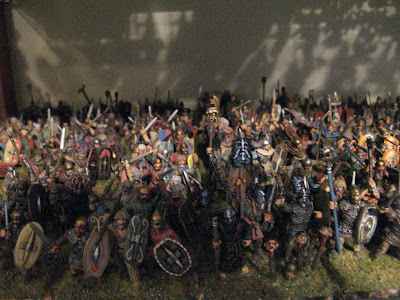 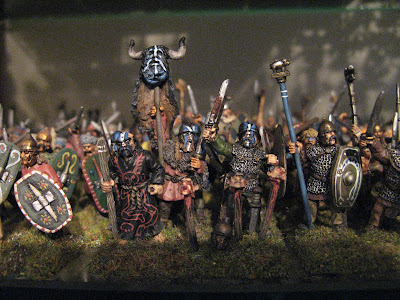 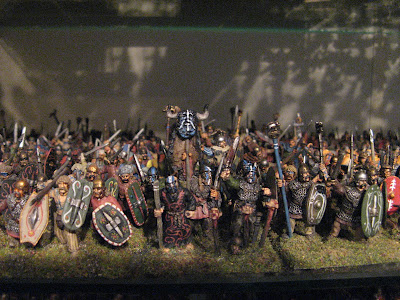 Druid Badofix joins the Nobles in their fight 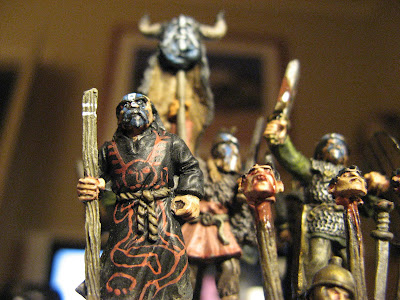 The scary Druid known as Badofix comes down from his hiding place and gives voice to the struggle with Rome. Having seen most of his order put to the sword, Badofix is in no mind for mercy and sets his band of dispels to the task of gathering Roman heads. 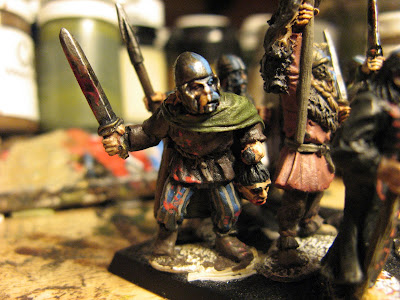 As I known Badofix very well, I thought it only right that I spend a bit of time creating him a nice figure base to go with his namesake. The Horned god standard was made from a Blacktree Design German and a lump of 'Green Stuff'. It looks quite dark and foreboding which I thought suited the base of Badofix very well. Prepared for battle, all of Badofix's followers have donned their war woad to carry death to the enemy. 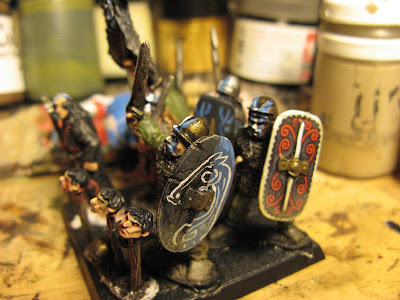 My Atrebates are finally flocked and finished. Their War Band still needs more members but it's nice to be over half way through. 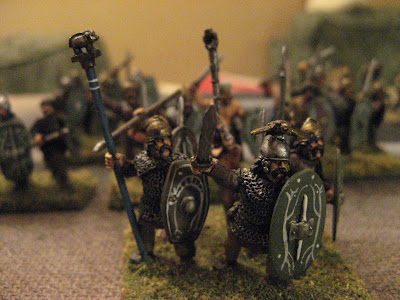 After finishing those WWII bases I had some Milliput left over. I thought I try out a mortar blast hole in the ground and use it up. I will see how this looks when finished, If successful, I will make about six more. 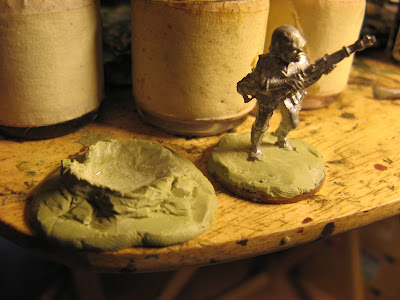 Posted by Secundus at 8:27 pm No comments: 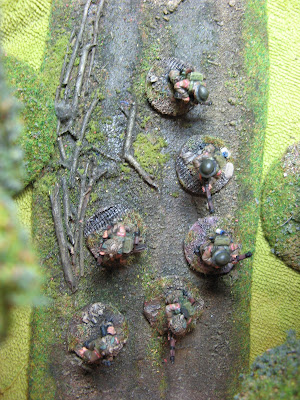 A section of weary Tommies make their way carefully down a muddy lane in Normandy. 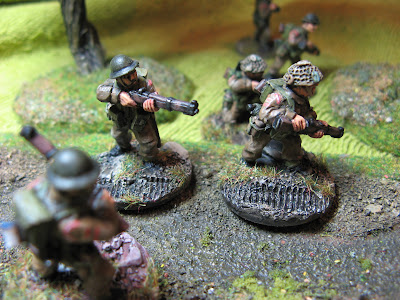 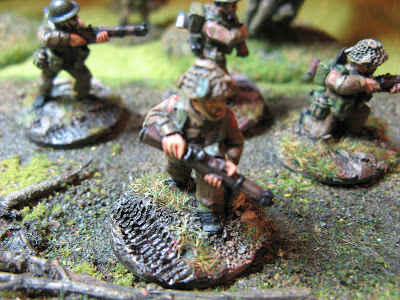 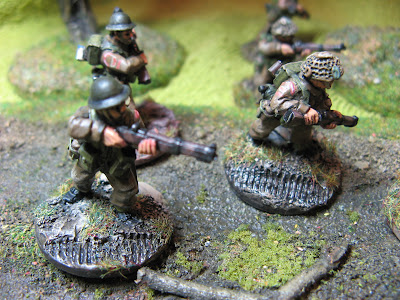 After the whole figure was painted and dry I washed the tracks on the base with PVA glue, which drys 'wet' looking. This mud is still fresh.
Also to add variety to some multiple figure poses, I gave some Tommies tea mugs on their backpacks. I like this touch as it gives them more character.
Posted by Secundus at 8:03 pm No comments: 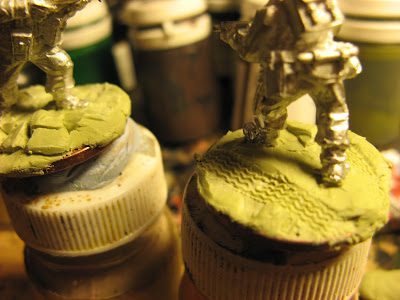 As my Tommies are heading down the muddy tracks of rural Normandy I thought I would put some transport tracks on their bases as well, both German and Allied. 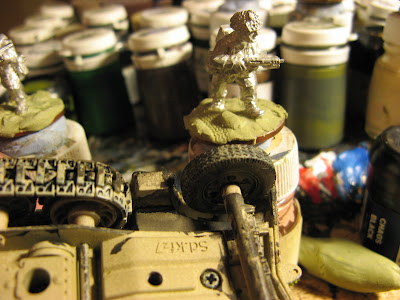 As you can see these are from a couple of fine detailed Corgi models, these can be picked up cheap these days. 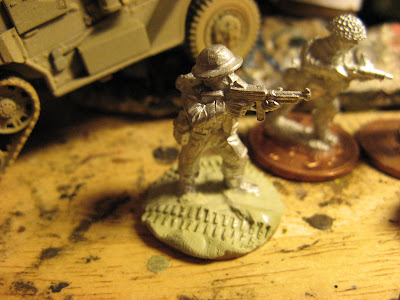 Posted by Secundus at 7:43 pm No comments: 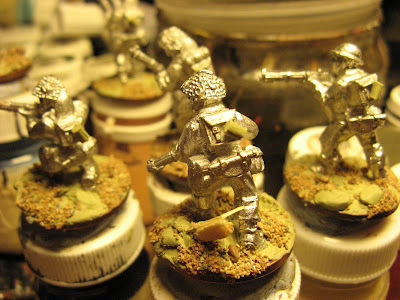 Some more examples of my British Tommies with their vehicle track bases. Once the putty is dry, I give it a little coat of fine gravel. This looks good when dry brushed and adds detail to fine to sculpt. 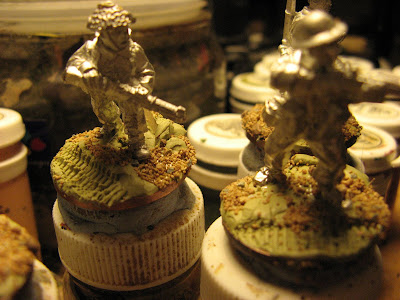 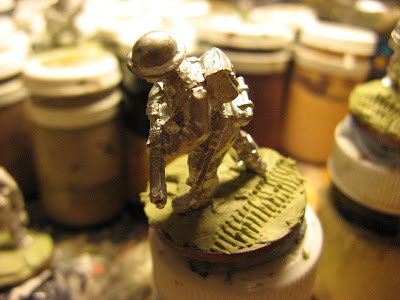 Posted by Secundus at 7:30 pm No comments: 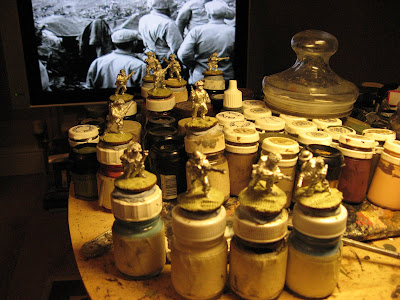 Back on track with my British Platoon, I had an idea to make their bases a little more interesting. So much so in fact, I thought I would share it with the world. As i built up the layers of Milliput around the feet of the figure I thought it would be good to put a few vehicle tracks in them to add detail and variety. 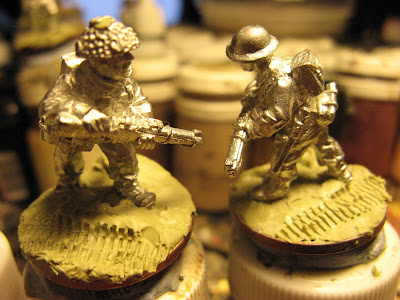 This was very easy to do as I just pressed a tank track into the putty while it was still drying. Fool proof. After I had done one and liked it, I thought I would dig out other vehicles and try them. To my delight the Corgi range of trucks and transports had excellent detailing on their wheels and so they too were in printed across the base. I am very pleased with the results and I think it really adds something to the base. 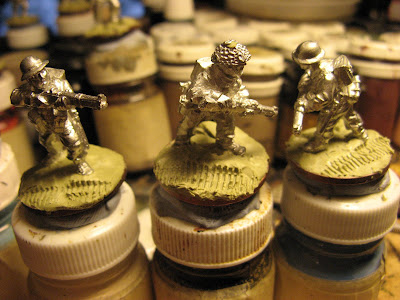 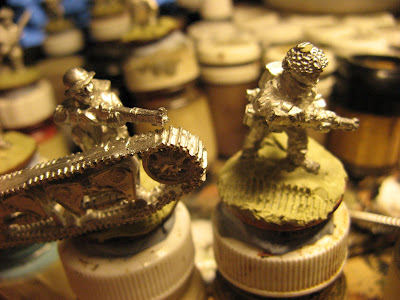 Posted by Secundus at 7:12 pm No comments: