After replacing the troops lost to the Parthian raid with levies from Cappodocia, Alanicus sends his new commander, Rufus Valerius, into Syria at the head of a army. The small force of Cappodocians are again caught on the march by a strong force of cavalry, only this time; they are fellow Romans. The column is cut down to a man, including the survivors of the Parthian slaughter, Alanicus has lost another force in the dry open sands of the desert.
Victory only comes when troops from Mesoptamia step in and catch many of the Syrian garrison trying to make for the coast. With more re-enforcements hurried down from Cappodocia the trap is finally closed and the Province taken. Although he has gained another victory in the East, back in Macedonia, Alanicus is any thing but happy. 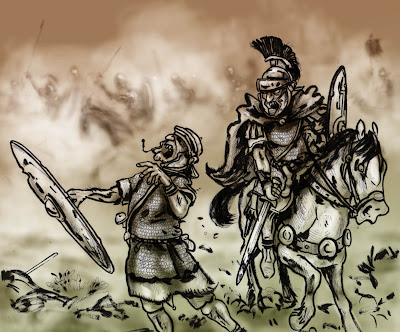 Alanicus has learnt one thing over the last month, out here in the open desert, It is cavalry and their maneuverability and speed who carry the day, not the infantry. A lesson I'm sure he'll use in the future.
Posted by Secundus at 7:04 pm No comments:

The III Gallica in Syria (Campaign 74)

This tough looking Veteran is a Gaul from the III Gallica Legion. Coming from one of the senior Cohorts, he is amongst the last of his people who gave the Legion its name. Being based in Syria, the ranks have become more Syrian over the years but with the constant up risings in the area, the Legion is still one of best battle trained and feared in the Empire.
It is with these hardened troops that Governor Vibullius hopes to stop Alanicus's march of Eastern conquest. Informed that the Governor of Syria may have connections with Secundus, Alanicus decides to double his bribe to 2000 Denarii. Which goes down very well with Vibullius who takes the bribe but then closes the gates and rejects him anyway. When Alanicus hears what has happened he is shocked and then flies into a rage. He will take Syria by force and stub out all pockets of Secundian support in the area once and for all. 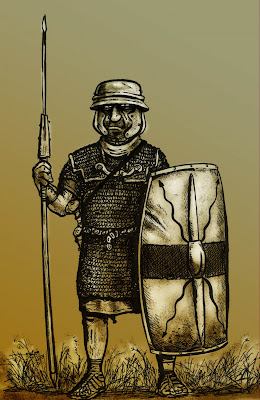 The tough veterans of the III Gallica prepare to repulse the forces of Alanicus, however, with the recent loses to the Parthians suffered by Alanicus, the III Gallica find themselves in a very strong position indeed! They won't be so easy to 'stub out' as Alanicus thinks.

Posted by Secundus at 6:29 pm No comments:

General Dewolfus of the Rhine

General Dewolfus of the Northern armies patrols his forces in Lugdunensis (Northern France). He has just received word to join Secundus in Noricum, but has tried to press the point that if he leaves, Aquitania will fall to Tullus. Dewolfus has sent dispatches back to Secundus asking for permission to take Aquitania and deny Tullus another Province in Gaul. Secundus on the other hand is too busy ranting at others to listen to good advice. 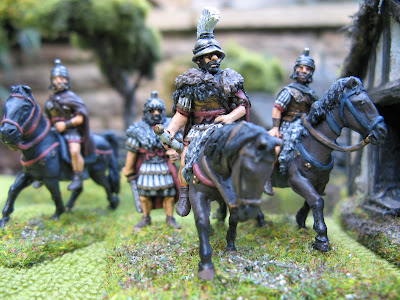 Tribune Antonius (Tony) shows off his new accommodation in Gaul, although he has received a warm wolf pelt from the region, he still misses his newly built Villa. Jupiter knows what state it'll be in by the time this war is finally over and he gets to return to it....if he returns at all that is. 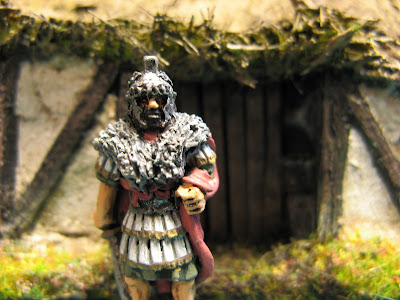 modelling note:
The figure used for Dewolfus is from the New Essex Roman range, as are the other mounted Tribunes. I wanted the General to appear very big and Northern looking and so built up his shoulders with 'Greenstuff'. Adding bear and wolf pelts helped to give him a Frontier look and a big black beard always adds to the Barbarian look! I also decorated the Horses with wolf pelts; these guys have spent too long on the Rhine for their own good and have gone a little native.
Posted by Secundus at 8:54 pm 1 comment: 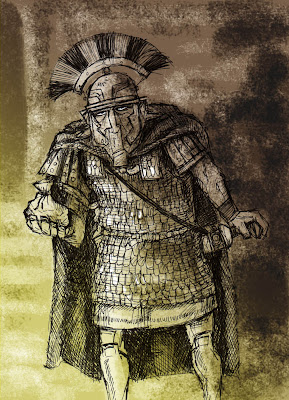 A Centurion with yet another bag of Silver in yet another Province, only this time it was the Kingdom of Mesopotamia. Alanicus's wealth was helping to make him one of the most powerful man in the Roman world, with Province after Province greedily flocking to his colours. Mesopotamia was no exception and took the bribe to fall into place behind Alanicus's unstoppable war machine. With the East now very much in his control, Alanicus started to recruit from the Army of Anatolia and it wasn't long before a Vexillation of troops were mustered and ready to march south.
However, Secundus's dispatch to Vibullius, Governor of Syria, had kicked up a Hornet's nest in the surrounding Kingdoms. Vibullius had sent envoys to the King of Parthia, Orodes, stirring the old King into action against Alanicus and his ever spreading armies.
In February, as the Anatolian Force left it's winter camp and marched south across Mesopotamia it was hit by a large mounted force of Parthians, lead by the Parthian Prince, Pacorus. The Anotolians, thinking the area safe were taken completely by surprise and were almost annihilated on the march. Only the rear Cohorts and elements of the mounted column managed to escape the ambush and send word back of the disaster. This was the first bad luck Alanicus had suffered since his bid for power had begun and it hit him hard. Half of his newly raised Vexillation had been wiped out by the lightning attacks of the Parthians. This was only the start of his troubles in the East, for once the Gods had sided with Secundus. 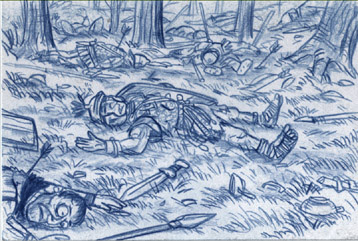 Posted by Secundus at 7:05 pm No comments: 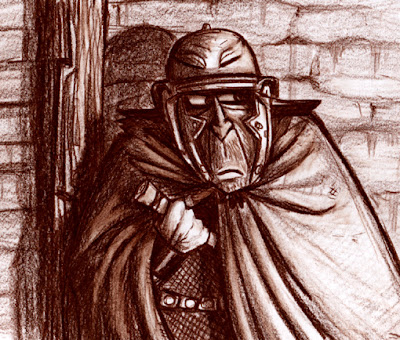 On receiving the news of Alanicus's rise to power in the East, Secundus sends a secret dispatch to his old friend Governor Vibullius. 'Resist this Alanicus at all costs and raise support in the surrounding Provinces' Secundus was never one for writing but his message was clear, this Alanicus, who ever he was, would have to be stopped.
Above, a messenger slips through the darkened streets and onto a ship bound for Syria.

The delegation from Carthage finally arrives in Alpes Gallica, dirty, unshaven and tired. This is the closest any of them have come to the front line and they a don't intend to stay a moment longer than is necessary. Again and again they try to prompt Tullus into following up his success at Valentia and call out for a quick victory.
They try to threaten Tullus with being replaced by someone more willing to fight, but both parties know this is an empty threat and Tullus remains unmoved by Lucius's taunts. The Senate have little care for the state of Tullus's depleted and tired army and all talk is of restoring Rome and glorious new era. 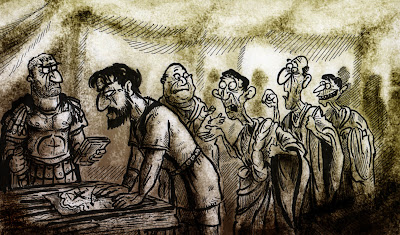 Tullus has the delegation removed twice throughout the day, but Lucius Plaudicus keeps coming back with renewed vigour. Finally, just as Tullus is about to order them out at sword point (again) he receives news of another problem. As the Senate babel on, working themselves into a frenzy, Tullus reads the dispatch aloud to the room. Now they have two usurpers to worry about.
The delegation is speechless for a moment, then fall upon Tullus pleading with him to save them and Rome from these mad men in purple, who appear from nowhere. Tullus now has a lot to think about and has the jabbering Senators escorted from his tent. For the moment they are out of sight, but not out of mind, for he can still hear them crying out to him to save them. "why me..." sighs Tullus. With now two opponents, Tullus rejects all pleas for a quick victory. This will be no quick war.

Meanwhile in Noricum, Secundus secures his newly won province and hides away from public view. Too busy nursing his pride and blaming others, he shuts himself off from everyone, even his advisers. He only recovers when forced to react to news that two of his top generals have fallen out and soldiers are brawling on their behalf. Secundus, quite recovered, snaps back to his old self and quickly stamps out the rabble-rousers. 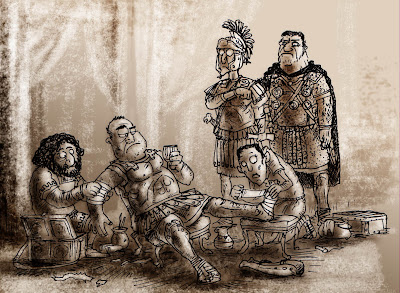 It was just after dealing with this minor problem, that Secundus first caught wind of a major one. He received a letter from his old friend, Governor Vibullius of Syria, telling Secundus of what exactly has been going on in the East over the last few months. The letter goes on to explain how using great cunning and alot of silver, Alanicus has started to carve out a chunk of Secundus's empire for himself and that his men are calling him Emperor. 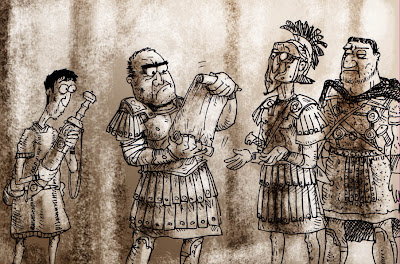 Secundus is not happy and the army soon wishes it had behaved in his absence.

Upon hearing of Tullus's success at the battle of Valentia, members of the Senate (now in Carthage) appeal to Tullus to finish the job he has started and put down the tyrant Secundus. Used to expensive living, the wealthy nobles of Rome have no taste for the campaign life nor the hot, dry, arid lands of Africa and so put together a weighty delegation to join Tullus in Gaul. 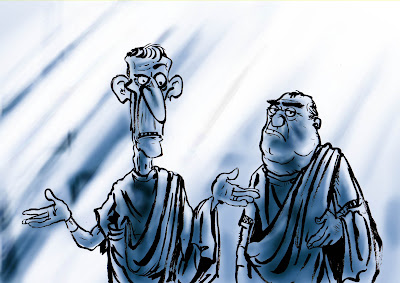 Itching to get back to Rome and check on their properties and investments, these Senators have their own interests very much at heart, something that Tullus is aware of and all previous appeals from them for a quick victory, have been ignored.
However, now that their top spokesman Lucius Plaudicus has been elected to lead the delegation, Tullus will be forced to listen.