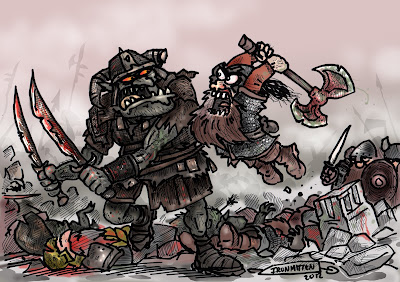 I don't suppose you'd be interested in buying some figures off me? I have a few packs of Roman auxilia and some British Paras made by the same company that you use (I forget the name).

I'm afraisd I'm pretty much full up here as it is, sorry.

I have just come down from the loft looking at all my old boxes of Fantasy stuff from when I was a kid. Quite a sad experience for some reason. I left them up there.

Thanks for the offer though. My advice is to wack them on eBay, they should shift very quickly as they're all good makes. I'm sorry to see you bow out Consul, your comments always made me laugh. Best wishes Simon.

That is great!
You can see my own Dain and Azog here:
http://covadotrasno.blogspot.com.es/2012/04/xv-certamen-de-modelismo-escala-figuras.html