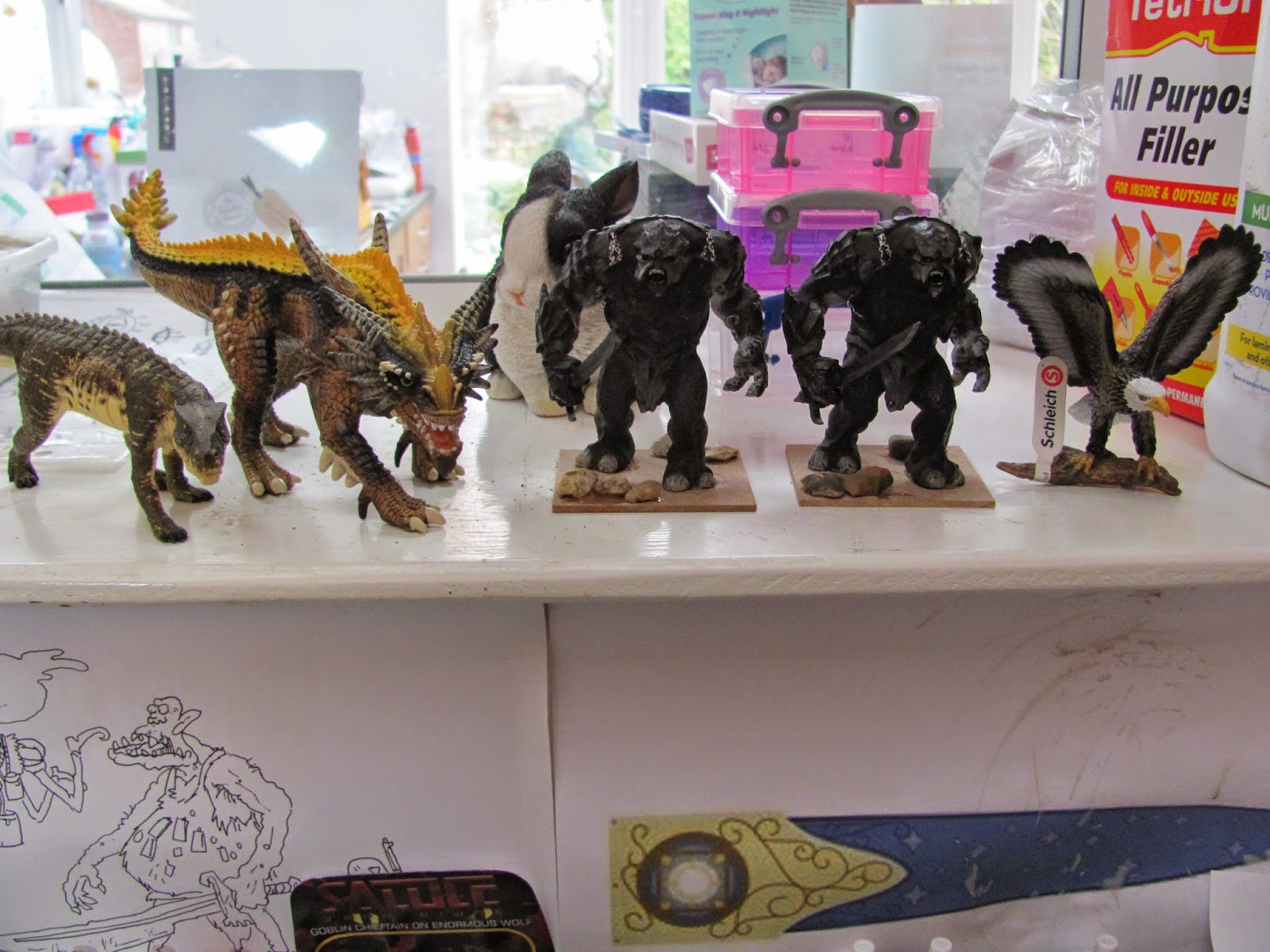 Originally It was HOTT and It's ideas that got me back into painting Fantasy, although I am yet to play a game, I was struck by the idea of using other sources of miniatures to form armies. I loved this form of imagination and the ideas and bargains you could find to create armies from novels and films. This idea of using what ever you can get your hands on has found me using plastic Eagles from Schleich. Unfortunately the brown bear was just too big to use as Beorn...sigh.

Keeping this novel way of creating armies in mind I found myself buying two huge armoured trolls off eBay for a very cheap price. A gaming figure this size would cost an arm and a leg.

The figures are huge and unlike the GW trolls which are slightly undersized for my 28/30mm forces, these guys are slightly over sized. However, better over than under as the third  armoured troll below demonstrates. He still makes a good model but he is smaller than the GW figures which is no good.  The two in the background are a good head and shoulders bigger than the GW sculpts. Originally I just bought one, the character is meant to be a chieftain so I thought great, he fits being that size. When the figure arrived I was so taken with the it I quickly bought another one before they sold out. I plan to use them as giant armoured mountain trolls and paint them slightly differently from each other. 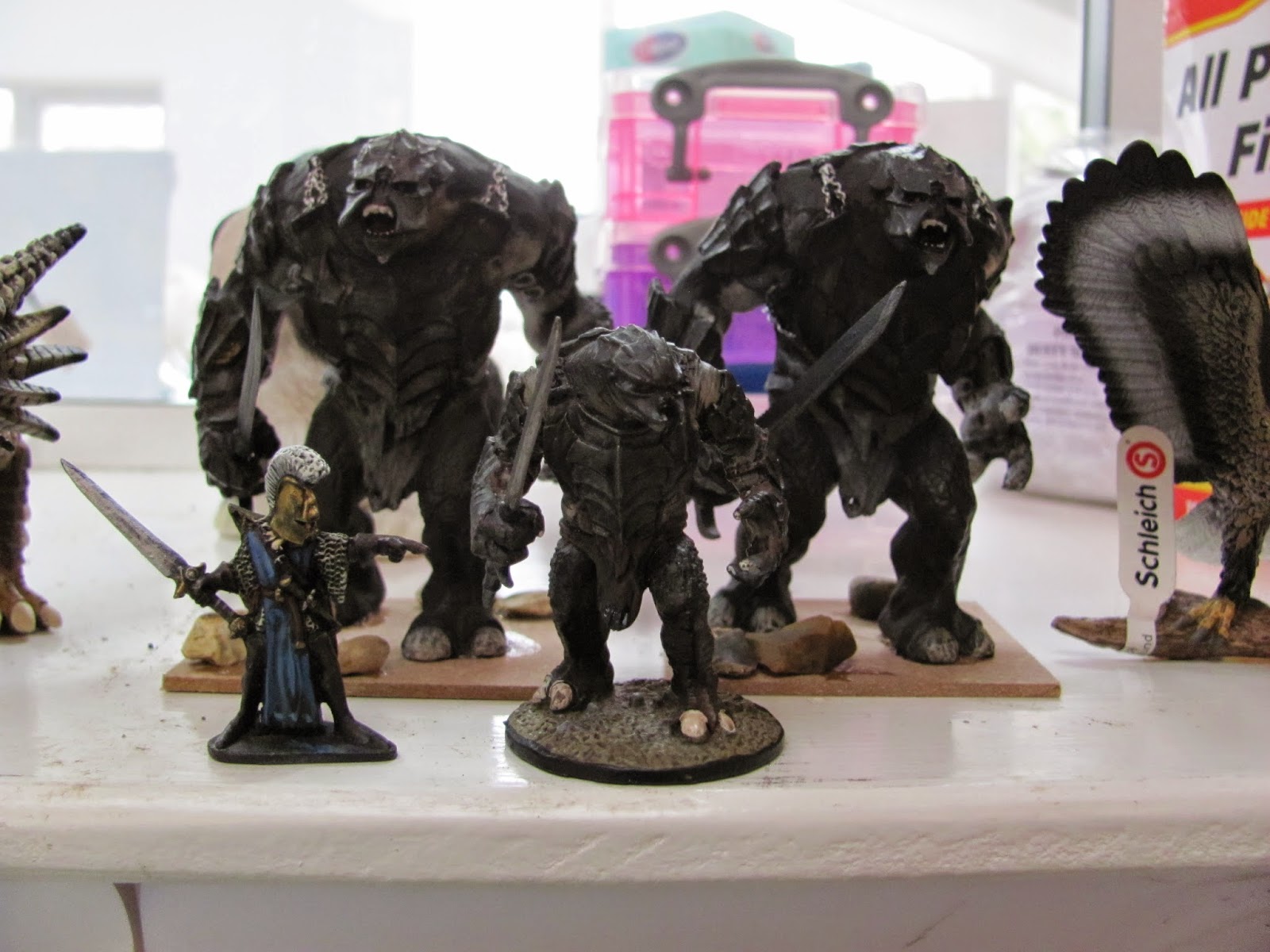 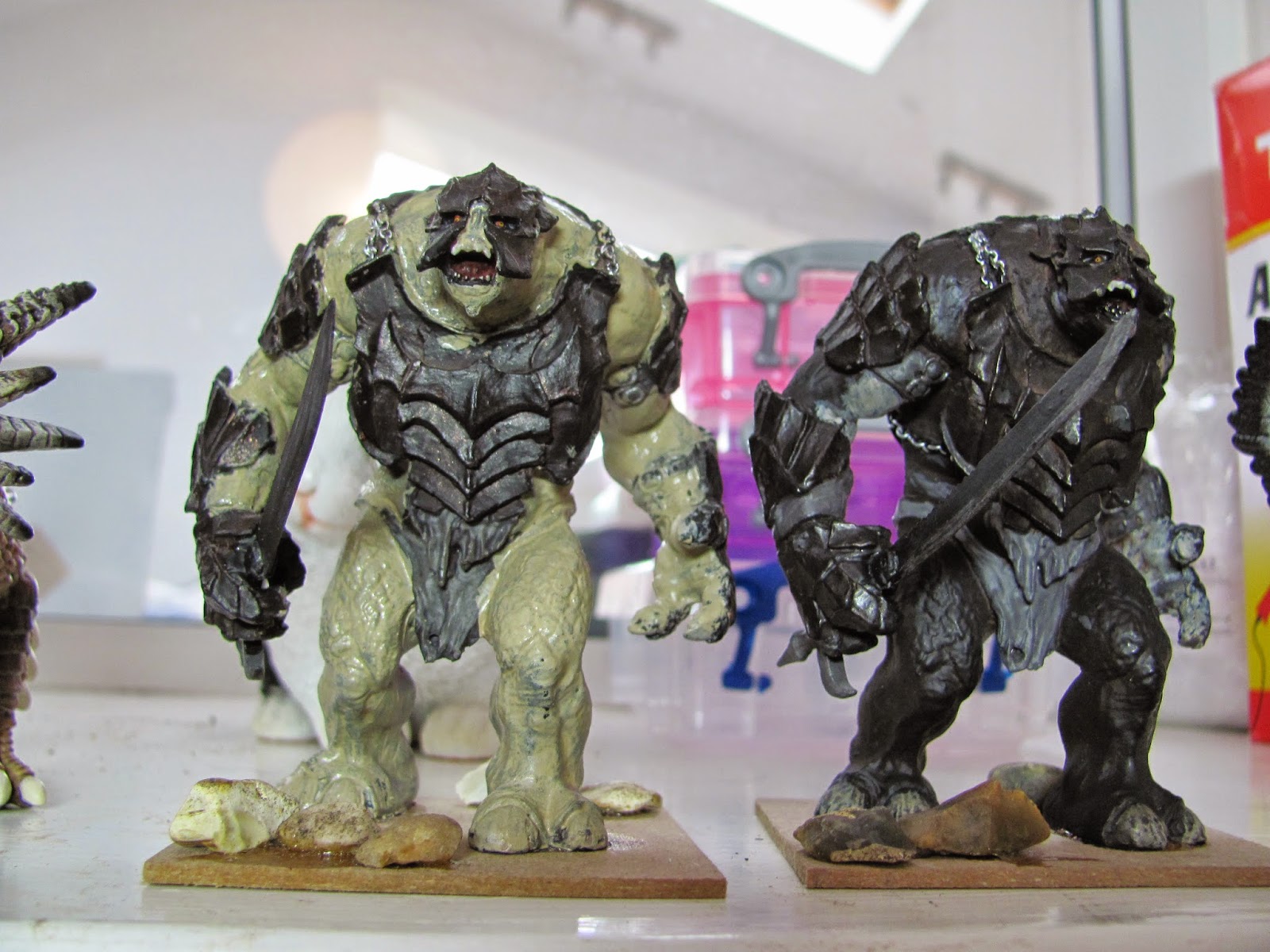 The first step with painting these trolls is to paint the skin a light colour. This will form the undercoat in between the cracks on the thick 'Rhino' skin. The figure on the right is how they came ready painted, quite usable at a pinch. 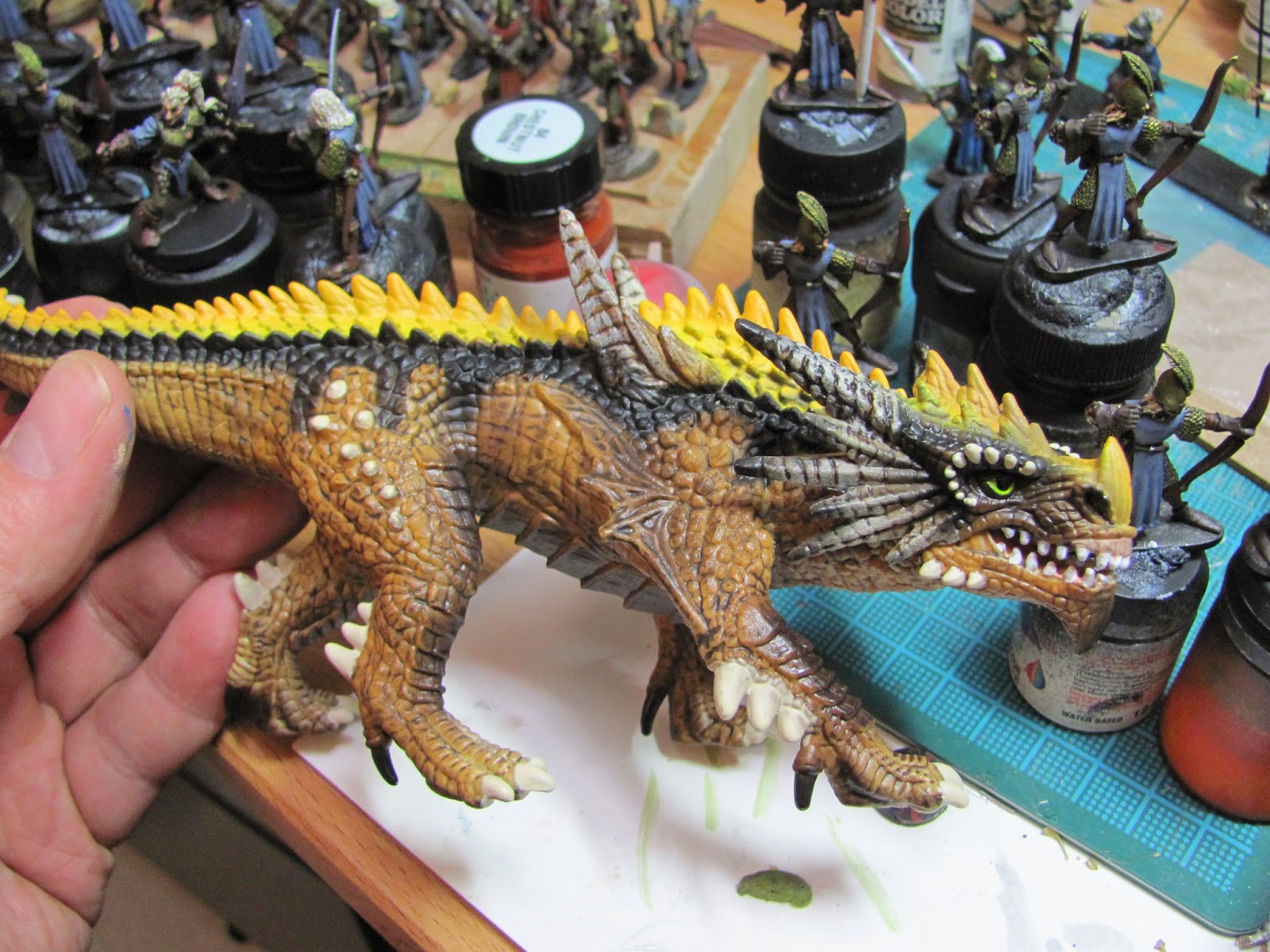 The Father of all dragons, Glaurung has caught my imagination. So I started to look around for a suitable figure for him. This one again from Schleigh caught my eye. He is defiantly a dragon with all of his horns and spikes. My only worry is that his legs are slightly too long! Turin kills Glaurung as the great worm heaves his body across a ravine in the ground. There are many illustrations of the great worm and most have him with short crocadile type legs. 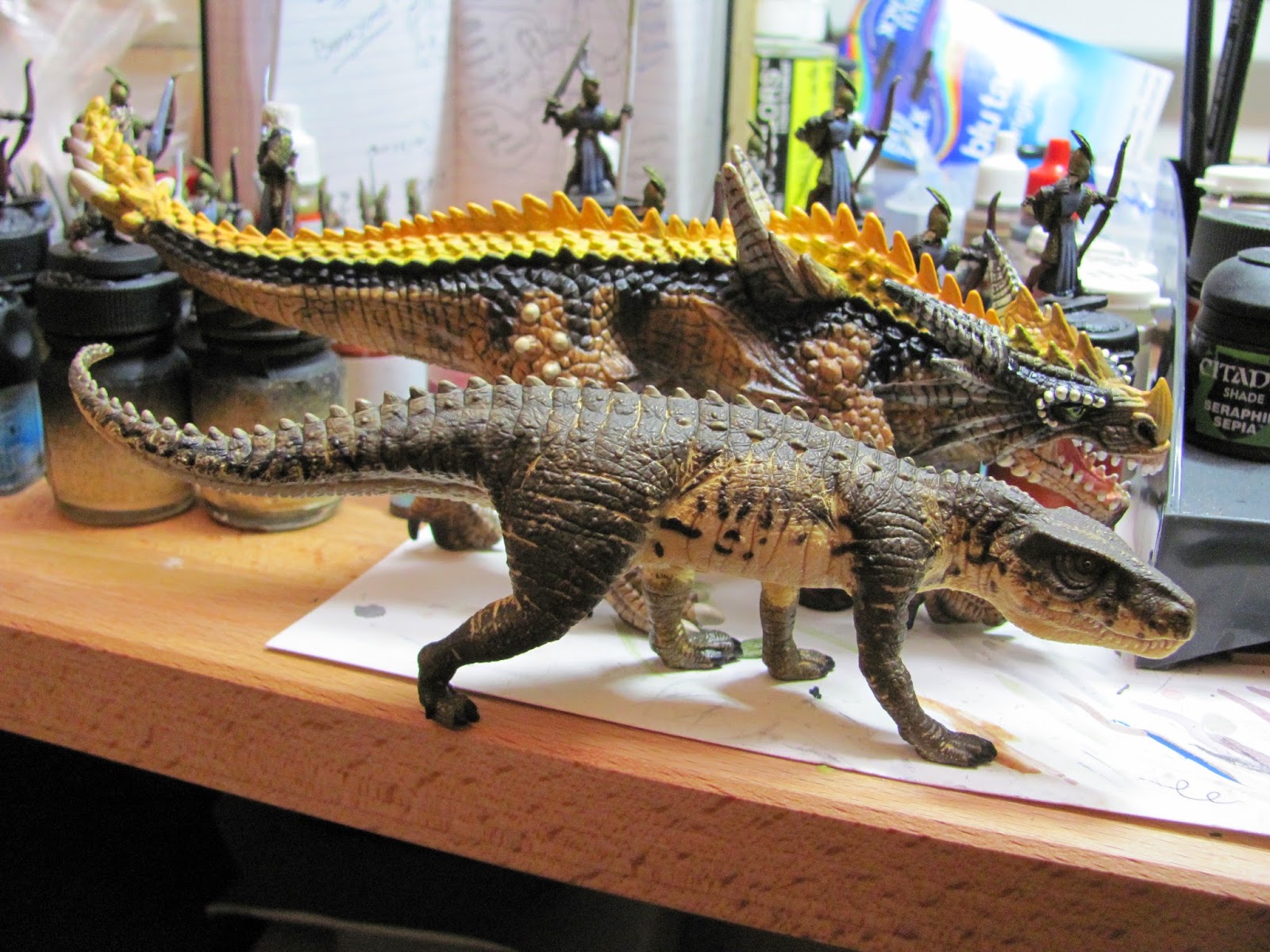 I also bought a Dinosaur that I thought matched the description of the great old worm, but I still think the dragon figure is stronger. He also has a good size to him which ties in better to the stories of Glaurung in battle. Again a figure this size in lead would cost me a mortgage! I'm really enjoying looking out at garden centers etc for cheap kids toys with a gamers eye, It's very enjoyable and addictive! 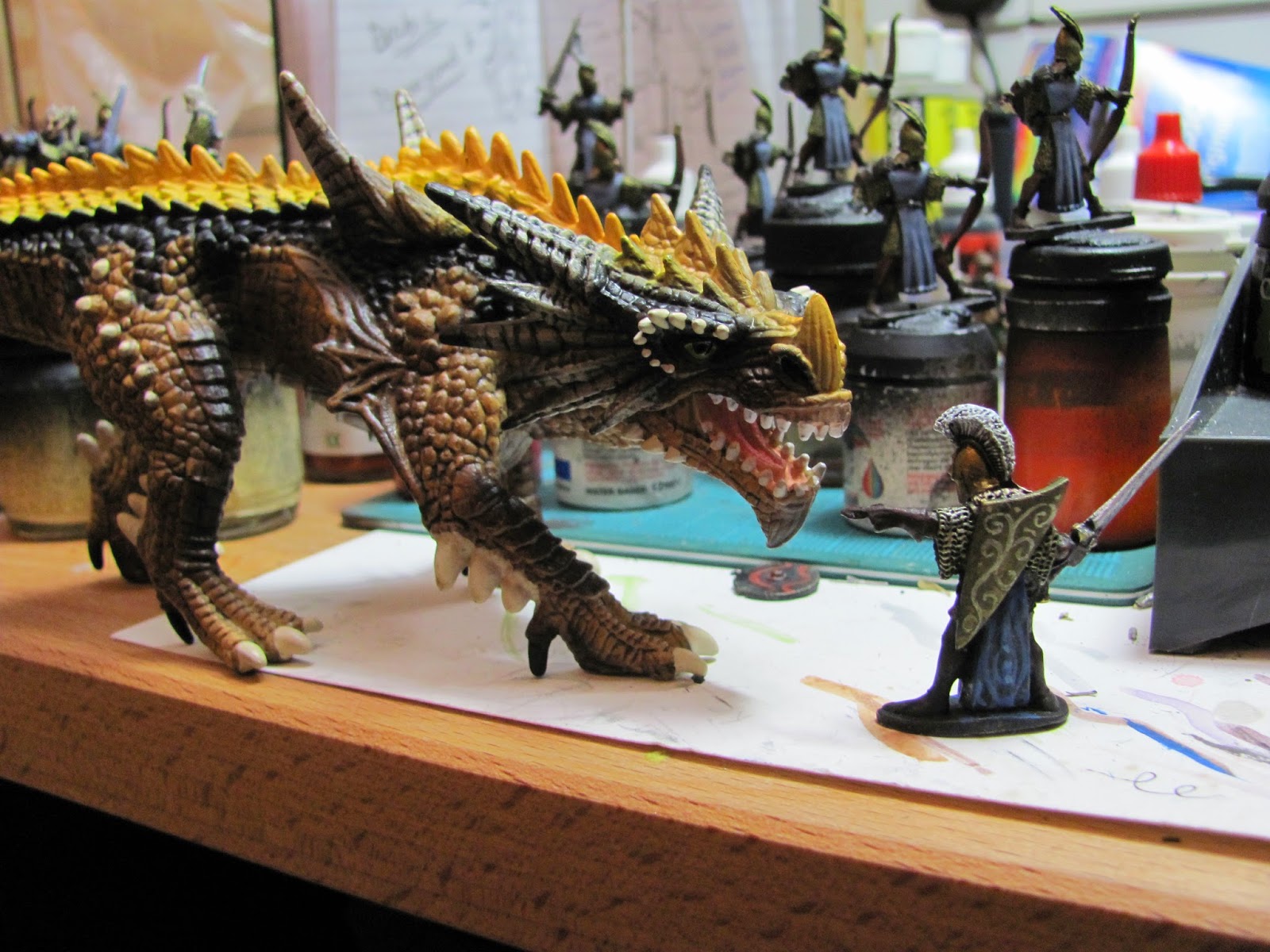 "Go back foul drake of Morgoth...go baaacckk...CHOMP!
Posted by Secundus at 12:06 pm

Nice collection of big figs; I like those dragons.

Remember that the artwork you have seen is merely artistic interpretation and not necessarily the image Tolkien envisaged.

Besides, at the end of the day, what is more terrifying; the T Rex striding with long legs, running as fast as a man (or the Raptors, who could run faster), with a long and high body reach - or the waddling, relatively slow, low to the ground croc?

In short, there is nothing wrong with your wonderful spiky Glaurung. A perfect choice! :D

that's one of my favorite web site :) thanks for the article

Thanks for your post. Click to play Plants vs Zombies , Solitaire,Tom And Jerry Games, Brain Games, Happy Wheels , Five Nights At Freddy's

Big Farm is an awesome multiplayer farm management game made by the Goodgame Studios.
Your mission is simple: Create a big farm, grow crops, breed animals,
and become the richest farmer of the universe. Enjoy Goodgame's Big Farm!

Not all are true. Everyone has their own way of thinking but I think they have to reconsider. I like to argue for the most accurate results.
http://colorswitchplay.com

My brother found Custom Writing Service DigitalEssay.net  and ordered a couple of works. Their customer service is outstanding, never left a query unanswered.