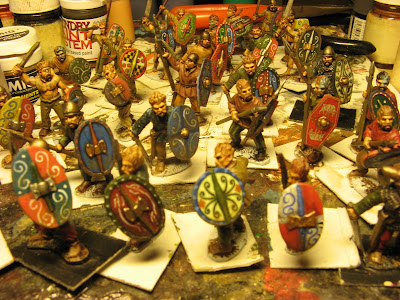 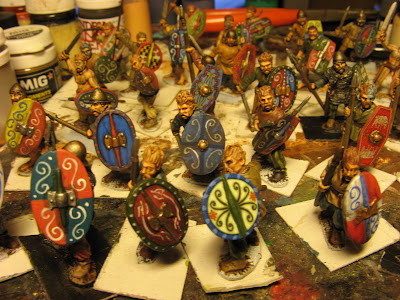 Shields painted up quickly, like some of the tunics, detail was added by using contrasting dots. This effect was quick to do and very effective.
Posted by Secundus at 12:07 am 16 comments: 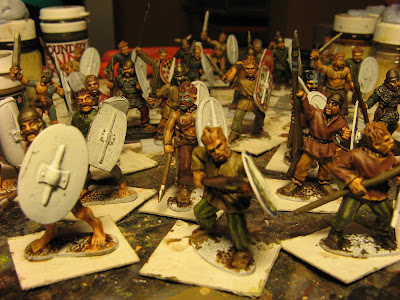 As these guys will join the War bands I have given them big shields instead of skirmishing bucklers.
I think another great thing about this way of working is that a lot of second rate figures get to see the light of day. Normally I would only paint up figures I liked the look of, but this way many different poses are quickly covered and dipped and used. The lead in my cupboards goes down and the War bands get bigger in exchange for a couple of minutes painting time. A lot of these second rate figures can really surprise you when a little colour is added, some of the under dogs in this latest batch have actually become my favourite characters. 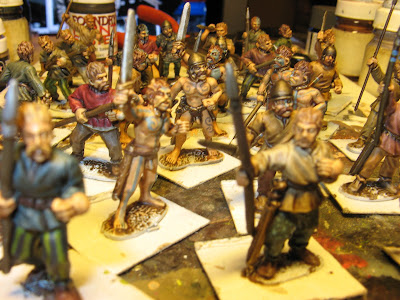 I gave the metal work a wash of black before dipping and this helped some of the helmets and chain mail. I think with dipping, part of the secret is the detail you put in before you take the plunge. Stripes on trousers and borders on tunics really pay off. 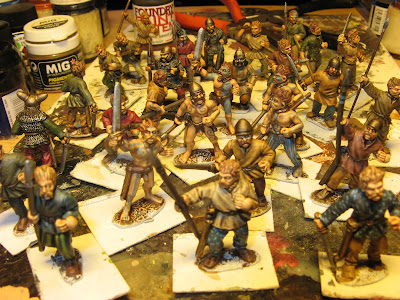 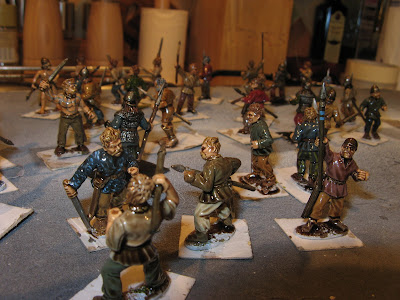 When I first started dipping last year I was put off by the glossy look of the figures after they had been dipped and for me the most important process of dipping, is the matte varnishing afterwards. It really changes the look of the figures and they become instantly battlefield ready. I also used this exercise to test out different colours and see just how the brown dipping stain effects them. I tried to use Napoleonic colours here and there and take note of what worked and what didn't. This will be the way I tackle my Ancient German army as the sheer number of men that can be produced is shocking. The slight drop in quality doesn't bother me as I'm always spending hours painting figures only to hide them in a six figure base. I will take the option of producing thirty figures over that of painting ten in a night any day. I will spend a little more time on the shields though, as these will be the focal point to the figures.
Posted by Secundus at 7:36 am 12 comments:

Having with fun with the dip 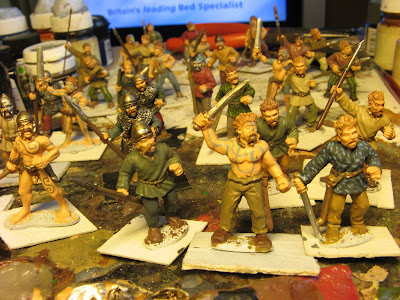 Yesterday I thought I would grab a bit of spare time and dip some more Celts. This is great fun for me as I get to see results really quickly. Dipping seems to be made for huge 'horde' armies and these thirty Celts were base coated in one evening. The picture above shows the unit completely painted with weapons etc. I came up with quick ways to show patterns on the tunics by dotting with a lighter colour. This technique should add interest and detail following dipping. 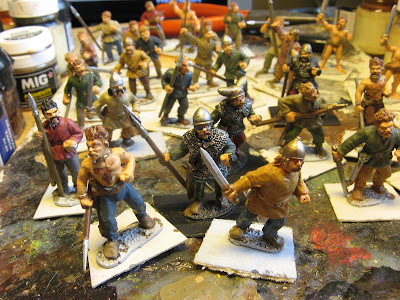 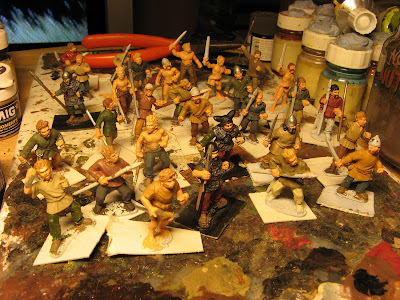 First evenings work shows thirty Celts massing for trouble. It's nice to see such results in one nights work and is a refreshing change after painting tricky uniforms.
Posted by Secundus at 7:18 am 3 comments:

Hero of the Iacon Bridge 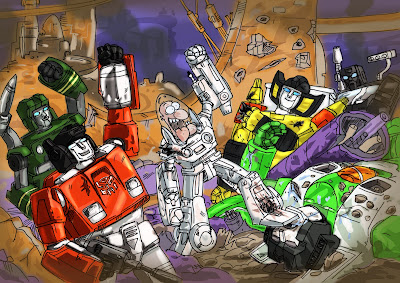 Secundus becomes a hero in the Cybertronian civil war.
Posted by Secundus at 12:46 am 4 comments: 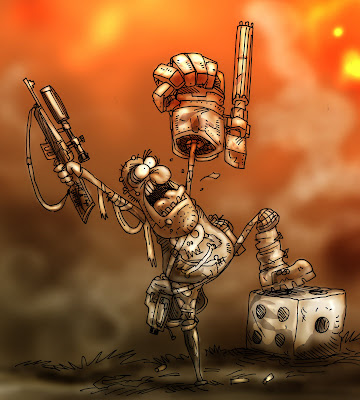 This 'space case' has finally run out of luck, but who needs luck when you have a can full of bullets and a D8-42 chain gun.
Posted by Secundus at 8:58 pm 1 comment:

Blast from the past 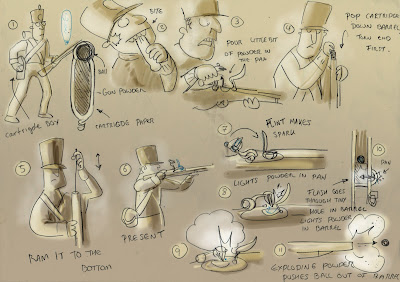 On visiting an old work colleague yesterday I was presented with a box of of cartoons I'd drawn for him back in 2005. Amongst them I found a couple that would sit nicely on the Blog so I scanned and shaded them. The first is a page that describes the loading process of a flintlock musket and the second was one of many French doodles. 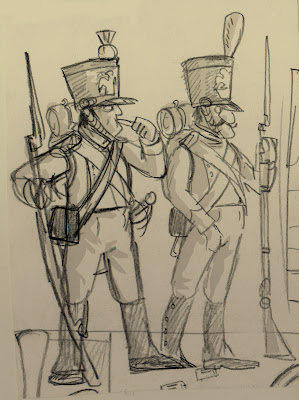 These two French soldiers must illustrate what I was painting at the time back in 2005...happy days.
Posted by Secundus at 9:07 am 6 comments: 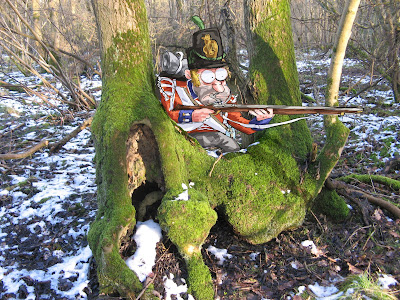 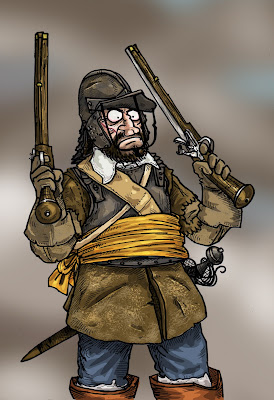 "I fight for the one true King...King Jesus!"

There's a few things that really capture my imagination about the English Civil War. I love the look of the Buff coated troopers of both sides with their lobster pot helmets and breastplates. Also the massive, almost out of proportion pistols of the time really appeal to me. This grim faced veteran of Cromwell's 'iron sides' knows why he fights this war and has trusted his faith to God to see It through.
Posted by Secundus at 12:53 pm 12 comments: 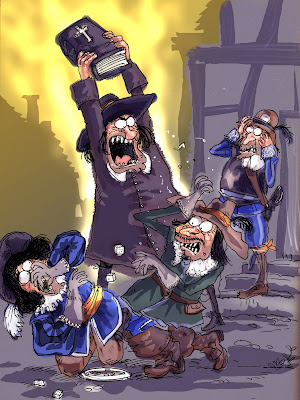 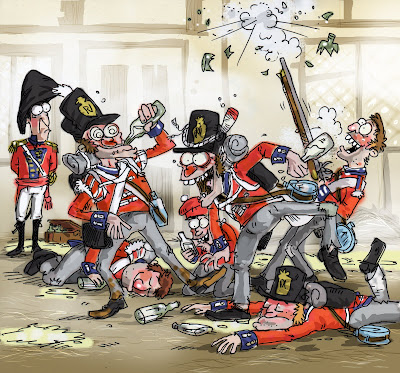 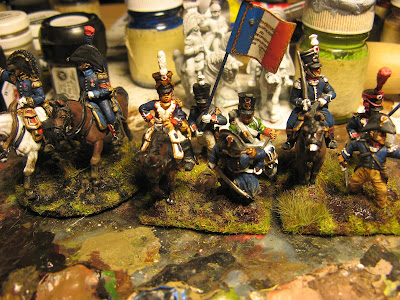 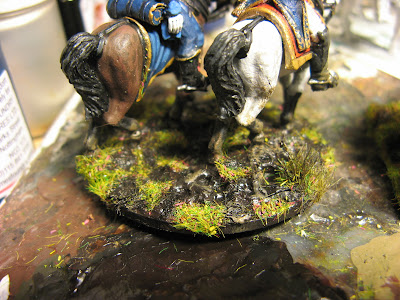 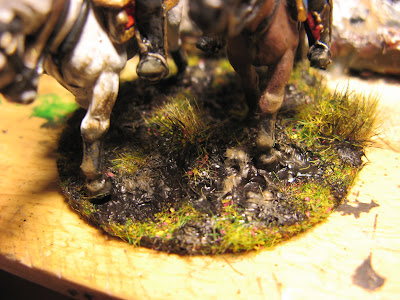 I think for the other Command bases I will just mix up a bit of Green stuff rather than the tricky Poly Filler. The results will be the same and a lot easier to achieve.
Posted by Secundus at 12:25 am 9 comments: 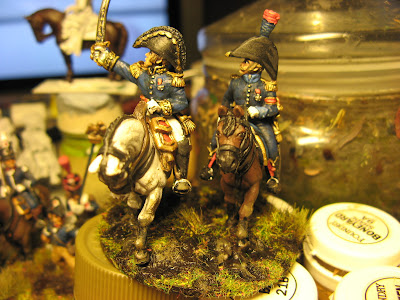 For the Command base I tried something a little different. Knowing how Poly filler can crack and flake when dry, I gave It a wash of PVA glue to fix It. It was quite time consuming but for Command bases I don't mind pushing the boat out a little. Gloss varnish was mixed with Scorched brown and a little black to make the wet looking mud. 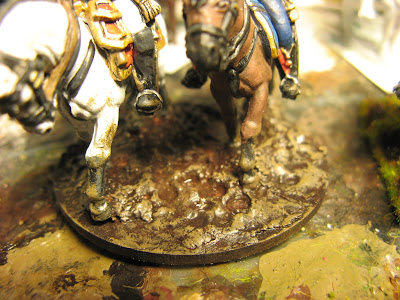 I made small hoof and footprints in the Poly Filler with a brush and dry brushed with shades of brown. 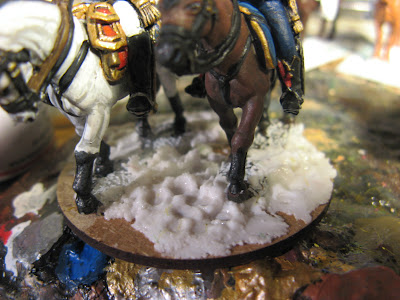