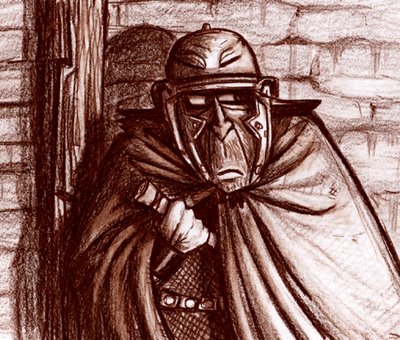 Finally, the messengers sent to the Eastern provinces have returned with news.....and it isn't good. Secundus had sent out dozens of runners throughout the Empire to seek support from other unhappy provinces, now, with the return of a handful of them, he descovers that the East has got its own ideas of Empire. The powerful armies of Pannonia and moesia have declined the offers made by Secundus and are sitting on the fence, watching events unfold closely, also there is rumur of another clamant to the throne from a man in Syrria, but these reports are sketchy to say the least.
Posted by Secundus at 11:03 pm

The armies of Pannonia have GOTH a lot of damn GAUL taking on Secundus !!

Arrrrrrr yessss...very good stu, just for that I will make you a character in my Pannonian forces(you are in Hungry after all...).How does Stuba Bowmonica Manus grab you?

A Capital idea my good man. I'm always ready to do my bit for the empitre, by the gods.

A New Emperor-Elect in the East?

Well geee, I wonder who THAT could be? ;) bwahahahahahaaaaaaaaaa