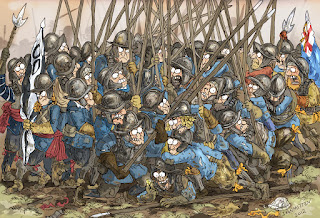 This was my first taste of battle, the re-enactment of Newstead Abbey 2012.

My world shrank to a couple of feet radius as I just listened out for orders and followed those around me. It was great fun and very exciting. The highlights for me were the murmurs that went through the ranks as we took up position opposite the enemy, some of which were old rivals. On the day we fought against another Blew coated Regiment, I'm not sure but I think they must have been the Blew trayned band of London.

When the pike blocks broke apart there was some confusion about who was on whose side as we ran back to our positions. I couldn't help but think of the reality of the moment and what it must have been like back then with both sides uniformed in the same colours. A problem that had echoed in civil wars before and since this one.

The picture says it all really, hard work but great fun.
Posted by Secundus at 12:16 am

I love how the lad at the bottom found a coin ;)

You captured the push brilliantly. I jus got the memory of the smell of the battle!!!

Another brilliant cartoon. Please get someone to publish a collection of your drawings - We need you on our bookshelves!

Brilliant picture. ECW reenacting looks much more like rugby than ACW reenacting in North America, which is not really a contact sport. I had a similar experience at my first big reenactment, the 1999 Wilderness battle in Virginia. My unit got separated in lots of power smoke and dense bush, and we reformed alongside some Confederate guys, just like in the period accounts of the battle. There was much laughter and bantering when we all realized what had happened. I suspect the actual thing was a bit grimmer.

I was in the block fighting against you that weekend, it was lord Grey's regiment of foote, could I use your drawing for our website please?

I really had a great time with your post! I am looking forward to read more blog post regarding this!
Happyroom2.com Tosstheturtle.net Catmariogame.com