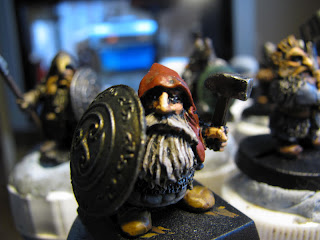 An old adventurer takes his place in the shield wall to protect his lands. I based this old guy on Balin and gave him a white beard and a red hood. Come to think of it, the guy next to him with the big axe would make a great Dwalin! 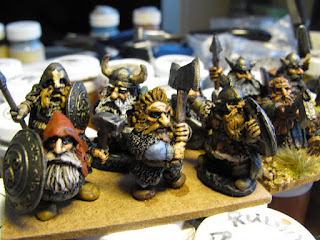 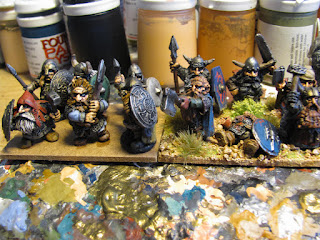 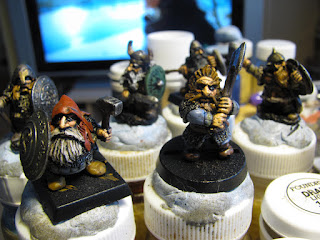 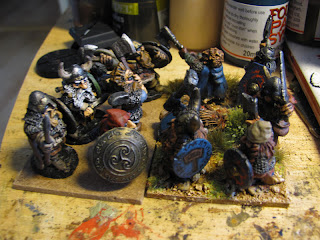 Two companies of Dwarfs based on 60x40 bases. These are bigger than recommended in the rules and have double the allotted figures, but I like my armies to be big and look like armies. An army of 30 figures was never going to sit well with me. However, It will take me longer to field an army now though.

I could always speed up the painting process by missing out the eyes etc but these old rare figures deserve a little time spent on them I think. 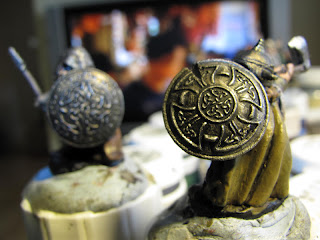 These are great old sculptures from the earlier 80's and although they have loads of character, I replaced their basic shields with new fancy ones of the Internet.
Posted by Secundus at 11:59 am

Great fun- I do love those shields!

If you ever fancy a game of HoTT, you'd be most welcome to come down here. My elves would give them a warm welcome...

I'm glad I caught that bit at the end - I thought I recognised some of the figs, but the shields looked fancy. They're a nice addition to the character of the old-school sculpts.

Those round metal shields are awesome!
Cheers

Nicely done that man :-) ready to lead some Hobbits into mischief

Great minis!, Where are the shields from?

Real trip down memory lane looking at these guys

Lovely work.
Is that a couple of old 'Northern Dwarfs' I spot in the line up there?

Thanks guys, the detailed shields are from a company called Scibor (I think). I got them off eBay.

The figures are all from old citadel ranges and yes there are a couple of old Norse dwarfs in there. I prefer these old sculpts, before the weapons and helmets grew to huge dimensions.

Next up an adventure party...well you've got too with Dwarves.

Yup the shields are scibor!
Lovely stuff, very well done!
Nice to see a post, it's been a while! :)