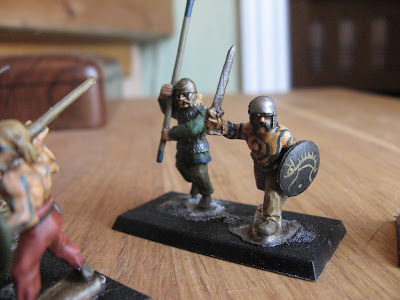 After reading an article in War games Illustrated about the 'Army Painter' staining process, I thought it was time I gave 'dipping' another try. So I gathered up some figures and set about them with a large brush covered in Flesh coloured paint. The results were good and the secret was in the matte varnishing afterwards. Before I had used Games Workshop matte varnish which has a kind of satin finish, but the varnish from 'Army painter' really is very matte indeed and makes all the difference. 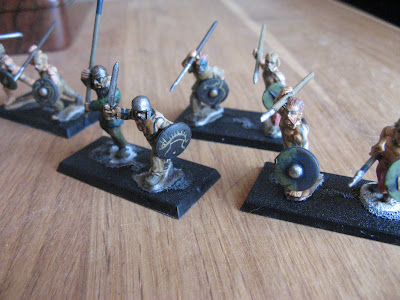 After they had been varnished I was very happy with them and thought they wouldn't look out of place within my existing units. There is a slight drop in quality maybe but I can live with this due to the quick time It took to complete them. The time was very impressive and rather than five figures being finished in a weekend, the number could rise to twenty four at least. So with the idea of having hundreds of fighting figures finished in a month I have decided to use 'Quick dip' for my remaining unfinished Barbarian units.

I used the weakest tone which is called soft tone, It's strentghs are light colours like browns, yellows and flesh. It works well on horse flesh too which I put to good use on some Horse Archers. Now I am thinking that with my Ancient Germans wearing mostly browns and bare flesh colours, the 'Army painter' pot will answer all my worries and I could be churning out fighting units every week. 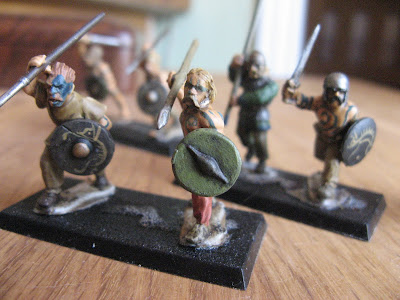 One of the toughest ideas to live with is the drop in quality but I am training my mind to think of multiple units, rather than single figures. In Barbarian armies there are hundreds of figures needed and with my usual technique It made them kind of unreachable and daunting. I would start well enough but the endless amount of work would get the better of me and I would go onto something else. By painting just one coat for each colour without shading and then dipping the whole figure in a pot of stain the painting process is halved and my huge armies will at least see the light of day on the field, rather than be locked away in the cupboard for evermore. I am very pleased with the results so far and the thought of finishing my Barbarian hordes.
Posted by Secundus at 9:39 am

Yes,that's exactly the frame of mind to have when using army painter is it's for mass production and not for painting competitions.Once I got my focus on this principle it's become easier to swallow and I even have achieved results That I'm quite happy with.Simply divide your armies into army painter and non army painter armies.It sure frees up the possibilities.:-)
Nice mini's btw.
Cheers
Christopher

Thanks, I have been looking at your own work after you commented and found you feel the same as I do about having useable units rather than a shelf full of lead. I didn't know there were so many converts out there until I started to look around, with such great results. Saxon Dog's ECW figures are the way forward I think, quick but effective. Thanks for the help Christopher, my mind is now well and truely made up, thanks again, Simon.

BTW from now on I will brush the dip on rather than actually dipping. These Celts suffered from a little excess pooling here and there that I will stop on my next batch.

It's strengths are light colors like browns, yellows and flesh...

The blog or and best that is extremely useful to keep I can share the ideas of the future as this is really what I was looking for, I am very comfortable and pleased to play Juegos Friv here. Thank you very much.