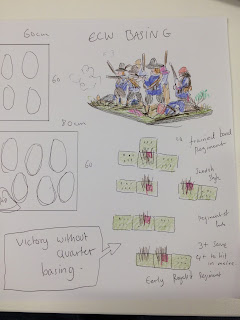 Although I am loyally waiting for' The Pikeman's lament' that is released in January 2017, I have also been tempted by another set of ECW rules, 'Victory without Quarter' I down loaded the free PDF and I'm quite impressed.

Unlike Pikeman's lament with VWQ you can field larger forces. I do like the idea of having different coat colours etc and the idea of doing dramatic bases is a real draw for me, a bit like my ACW bases with loads of drama as the unit struggles on the field. I may have to buy a few more causality packs. Pikeman's lament is more of a regimental skirmish game with each block of muskets and pike fighting as separate units.

My only slight worry with VWQ is that I like my armies to look like armies so I'm thinking of ways to increase the figure count in the regiments, maybe by making the bases bigger and adding 8 figures per base rather than 6 the regiment will look more substantial. However this may effect the shooting, not sure yet. 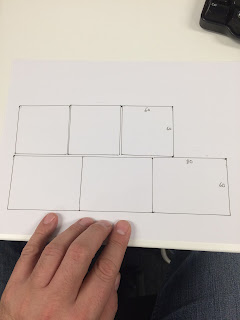 If anyone has played Victory without Quarter please let me know what you think of it, so far I like what I see.
Posted by Secundus at 6:44 pm

Combat and Shooting in VWQ operates at a base level - so if I understand the question correctly, larger bases/more figures have no impact on the combat calculations.

I use VWQ with 6mm figures, 12-15 infantry figures to a base, and apart from scaling down movement distances and shooting ranges, have made no changes to the rules.

I guess there always comes a point when you need to consider modifying move rates and ranges, but providing you weren't doubling the base sizes, I don't think there'd be a need for this.

People may have asked similar questions before on the VWQ forums at http://www.leagueofaugsburg.com/fightingtalk/viewforum.php?f=20 so there may be some useful info and opinions there.

As to the rules themselves - I like them. They provide me with the right balance between fun and period feel, and I can complete a battle in within a couple of hours. And being a solo gamer, the card based activation works very well for my purposes, and provides some scope for tailoring a game.

And I must like the rules - as although I'm primarily a small figures man, I've started building 28mm forces, inspired by both the original authors gallery, and the awesome work at http://themetalmountain.blogspot.com.au/

Hi Nick thanks for replying. I have seen the forum and indeed the lead mountain site and I know what you mean. Those units are great to look at. I have been really inspired by the warfare miniatures web site and their basing with causality figures mixed into the firing ranks.
With my larger base idea the only thing I can see that might be an issue is the space needed for a game and the fact that units fire along a corridor the same width as their frontage. However saying that if I played the rules with single mounted 'groups' the width would be all over the place.many thanks for your help, simon

Also I am a little gutted that I will have to make do with two standards per regiment. I have collected four per regiment in my collections, but that would look weird on the smaller unit. It's a tough old life .

I've played quite a few games with VWQ (both solo and 2-player) and like it a great deal. It plays quickly, has a good period feel and invariably produces a fun game. It's become my preferred set for the period and I've not used anything else for some time now.

Thanks Michael I have to admit I do like the look of them , they might even sway me from Lion Rampant.

I like VWQ and it is our go-to rule set for ECW battles.

I also like Lion Rampant/Pikeman's Lament types of games. Units with multiple figures on bases can easily be used for both styles of games.

A few individually mounted figures added to the multi-figure based units will give the "correct" sized units for PL and also to make individual casualty change. Alternately, just keeping track of unit casualties with markers or a roster works too.

Thanks Will, at the moment I am leaning towards multiple basing and keeping a score of wounds for PL just like I do with my Dragon Rampant games. Put it this way I have just ordered a set of blank playing cards off eBay and ordered some causality figures from Redoubt miniatures.

I have a question for you though, with the event cards. All the units and commanders are in with turn over and reload etc, but the event cards for other things... is there only one of these mixed in. (E.g. Bad powder, reduced shots) to the pack. If so are these random events rolled for each new turn and placed in the pack? It's the only thing that isn't that clear in the rules. Many thanks simon

I'm not sure if this is the proper way to use the event cards, but the way I generally approach it is:
* I have a single generic "Event" card in the pack
* When drawn, I roll for the actual event at that point

that way, I a) only need one event card, b) never know what event is possibly coming up in a turn, and c) can easily tailor the events for a particular game without creating special cards.

One thing I have found is that, in a very small game, the increased probability of an event occurring can sometimes influence the game too much. So when playing with less than 15 cards overall, and the event card comes up, I often roll a 50:50 chance to see if there will actually be an event. I find this smooths things out a little without completely removing the possibility of an event.

We play it pretty much like Nick for the same reasons.

I had a test game last night with my wife believe or not, loved how the infantry blocks took damage and soaked it up very realistic. However when she fired a cannon at my CinC I couldn't find any info on how to handle that. I was trying to work out how he would take damage. Can artillery target generals? The only other thing which didn't feel quite right was two units of horse charged , Gallopers drew up short and trotters shot at them. The trotters keep getting activated so they keep shooting with the gallopers just standing there.it was an enjoyable game played with Duplo blocks.i need to play some more I think but by the end the rules were getting easier. Great fun when the infantry drew up close to each other.

Firing artillery at the enemy CinC would be considered an appalling atrocity by 17th Century standards! Not to mention a waste of valuable ammunition.

Kidding aside, I believe the only way for officers to be injured is to be attached to a unit that takes a casualty marker either through shooting or melee.

For definitive answers you can always contact the author on the League of Augsburg message board:

Thanks William I'm glad you say that because it shows I understand the rules properly. It's what I thought when checking through them. I'm also glad there wasnt something obvious I had not read. I'm afraid my wife wasn't well herst in the ways of 16C. Combat as you can imagine. All I need to do now is work out the wired cavalry event, trotters charge then stop at 8 inches fire their pistols, do they ever close with the enemy? It lead to a very strange stand off in the game.

Thanks William I have scanned the authors forum and found it very useful. Rules for highlanders and club men was a great find on their, worth writing down that one.

Although I am loyally waiting for' The Pikeman's lament' that is released in January 2017, I have also been tempted by another set of ECW rules Applying for a job is stupid. ... Everyone who has ever sent a job application letter has felt the urge, the temptation to say what they really think. ... Visit ecwpress.com for more details.