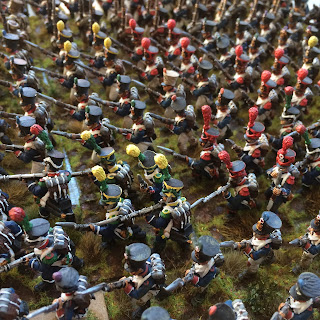 Having a friend who is collecting Prussians and researching Waterloo has given me a burst of life to start on a new french unit. I have researching the young guard for a while and so decided to create a unit of Tirailleurs to stop him in his tracks. In 2004 I bought a load of front rank figures to create some Young Guard, they have sat hidden away for years until now. the models are old by Front Rank standards and have been removed and up dated by now. There has been more great reference books released since I first started to look at the units which has helped a lot in researching them.

I've discovered that the Tirailleurs were given red epaulets for the Waterloo campaign. I had bought a lot of line Voltigeurs back in 2004 to convert, thinking it would be a simple painting conversion. However after a little thought I started to model some epaulets out of greenstuff. it was a lot easier than I thought and I realized doing the complete unit would be fun and also a one off. I will also look to increasing the size of the pompoms too. The great coat colour has caused all kinds of confusion. I have decided to paint most in grey and browns with just a few in light Blue. That way I've covered all the options. 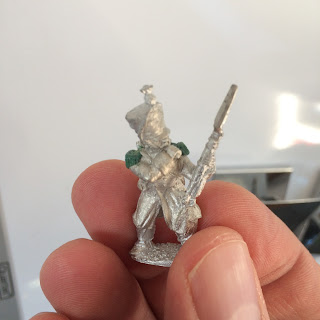 The new releases from Calpe Miniatures have got me thinking about replacing my regimental command with some better figures, including the colour guard etc. I imagine that now calpe are doing French It's alright for front Rank to start doing Prussians.
The new Front Rank prussians do look good and can be bought in Regiments which is very handy, ear marked for the future I think.
Posted by Secundus at 1:55 pm

WOWOW! these are wonderful little men and fighters. From where have you brought these? Are these made of plastic or with some metal? Looks perfect for your regiment addition.