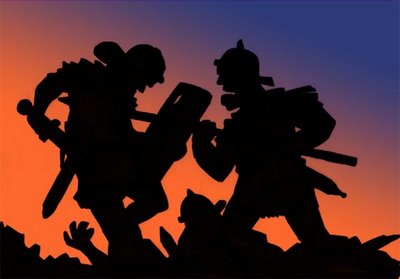 I've been reading about the Batavian rebellion today and have decided to make up a couple of units of them. Batavians were a small tribe that came from where the Netherlands are today. They must have been excellent warriors, for Rome swore by them and used them in many of her campaigns. They helped the Romans conquer the British at the battle of Medway by swimming across the river up stream and attacking the bewildered British in the flank, throwing them into disorder. In 69AD - 70AD while Rome was tearing herself to pieces in civil war, the Batavians saw their chance and rebelled. It was a good time to stage a rebellion; with all her armies tied up killing each other, Rome didn't have much in the way of spare troops to send to stop the uprising. Indeed, just as Vitellius damned it, Vaspasian aplauded it for keeping the armies of the Rhine busy and off his back while he fought in Italy. By the time it was finally quashed, the Batavarian cohorts had beaten 4 legions and another army of Auxiliaries that had been sent to destroy them. They were forced to renew their alliance with Rome and supply her with more hard fighting men as before. However, Rome's trust in the Batavians had been shaken and Batavia had to stand the humiliation of having a legion stationed nearby, to keep a watchful eye over things.
The idea to form up some Batavian cohorts came while I was looking at the Foundry web site. In their latest Imperial Rome range, there are some huge, tough looking Auxilliaries. They seem to fit with my idea of what the Batavian soldiers would have looked like.....so I ordered some. I think when I play these, I will play them as veterans, well it seems rude not to really.
Posted by Secundus at 10:56 pm

Nice pic, adds a bit more variety.
I like the sound of these Batavians; well 'ard.

WOW simon, your pics are just brill! I'd say definalty as good if not better than the men are from mars, women from venus piccies!!!hehe!! You know so much it's amazing!!