Charge of the Wolf heads

The Frontier Wolves are not just fiction any more as they ride here, across the scottish moorland. They are made up mostly from the Foundry Dacian range with a few Old Glory and Essex figures thrown in to add to the mix. In the book, the 3rd Ordo Frontier Wolves are made up of two Romanised tribes which live in the hinter land between the Antonine and Hadrian's wall. They wear the wolf skin to help break up their siluette on the horizon line and allow them to slip undetected through the broken country side 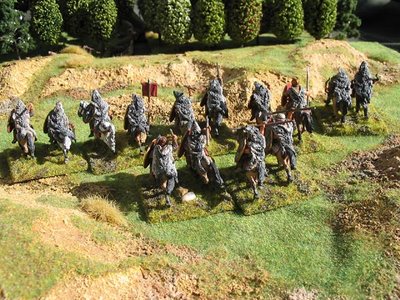 .
The largest contingent that made up the wolves, were the Arcani but the eyes and ears of the Ordo fell to the Dumnoni 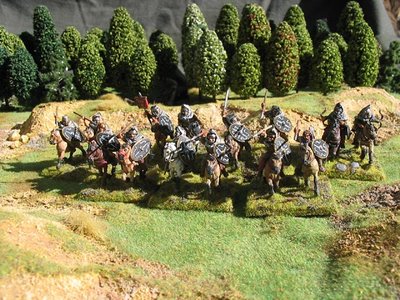 , who were masters of the bow. To reflect this I added a couple of horse archers to create the feel of the motley bunch. Another thing i did when I ran out of Roman wolf clad heads to convert, was to use normal helmeted ones and sculpt the wolf hood so it looked like it had blown back in the wind.....with this little trick i was amble to increase the size of the unit on the cheap, although saying that, all the Roman wolf heads were left overs anyway and would never have been used otherwise, so the whole unit was made up of left overs really......much like the real Frontier Wolves in the book.
Posted by Secundus at 10:55 pm

I'm liking these pics: very effective with the bases, the board and the trees in the background.