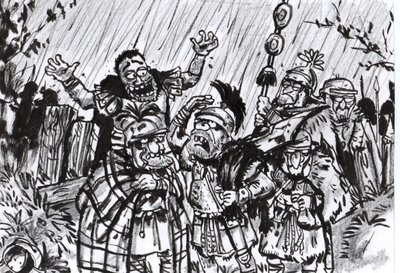 With the the bad wheather dampening everyones spirits, morale was lifted by the province of Belgica, who flocked to the Secundus cause gladly (with a small bribe to sweeten the deal). Belgica had been unhappy for some time and they jumped at a chance to change their fortunes. However, the currupt governor, Titus Vedius back in Britannia had diverted alot of the army's pay into his own estate and properties, this was a minor setback for Secundus and one that saw the Governor on the end of a sword by the months end. With the Britannia free of her armies, he wouldn't be the only one who saw their chance to make it rich quick. Secundus didn't know it at the time but Vedius actions were to have grave repercussions two months later.
Posted by Secundus at 2:34 pm