May, saw the construction of miles of earthworks and defences along Hispania's border with Gaul, as Tullus dug in to protect his provinces from invasion. 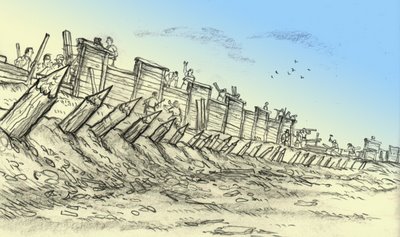 Tullus's trust in Lucius Silius Famia had been well founded and the new Legate was showing his worth.

Tullus down in Baetica still was having run of good luck. After a failed assassination attempt on his life, he strode on to cross the Mediterranean and take Mauretania Tingitana, with not a drop of Roman blood being spilt. And in July, he started the construction of a port on the coast of Baetica. The Gods were indeed in his favour.......for now at least.
Posted by Secundus at 3:28 pm