Colonel Henry Lunsford at the storming of Bristol, July 1643. 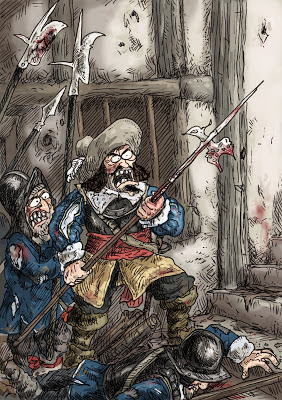 Here we see Colonel Henry Lunsford leading from the front during the brutal street fighting in the storming of Bristol. In a few moments he will lose his life, shot dead at the top of the Christmas Steps. For many years after, the steps were known as Lunsford's stairs, in honour of his memory.
Prince Rupert was so impressed with the courage and fighting spirit of the regiment, that he took it as his own and renamed it, giving it his own name.
Thus Prince Rupert's Blew coats were born and went on to greater deeds of bravery, fighting for their doomed King in the English Civil War.
Posted by Secundus at 5:44 pm

Very good! I like his face!
he don't know that he will die but have no fear about that!

Another terrific caricature - perhaps another in a series on the exploits of the 'Blews'? Speaking of which, how's your reenactment pike wielding going? Happy New years to you and here's hoping you can dispatch a few of those Parliamentarian sods with your trusty pike in 2013!

@ Docsmith, A happy new year to you too sir, the pike wielding is going well. I have been enjoying myself at sword school and am now ready to take it to the enemy. I shall post more about it all as it happens.