Dwarves of the Iron Hills

Well here they finally are, the tough veterans of the Dwarf and Orc wars, the warriors from the Iron Hills. They are mostly old Asgard figures with a few citadel and Alterative Armies figures mixed in for variety. 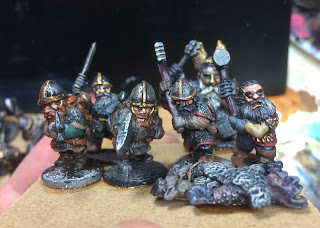 They are the closest figures I have found that match the description of the Iron Hills army. They even have packs on their packs, I think they are designed to be adventurers with supplies etc. They are described in the Hobbit as having mattocks, so I have swopped out a few axes for plastic GW dwarf hammers I bought off eBay.
In GW terms they are used single handed but once these large hammer/mattocks are put on a two handed shaft they look a lot more feasible. 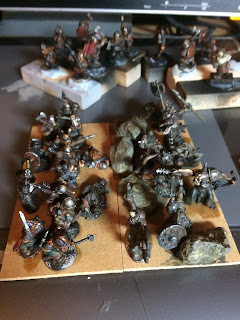 Orc raiders bite off more that they can chew with an angry company of Dwarves. 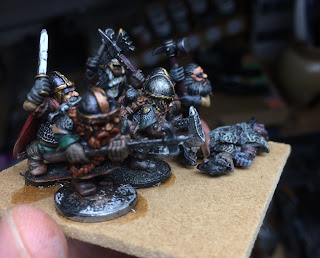 The Dwarves are master smiths so I concentrated on the armour more than I normally do. It was given a wash of blue ink, then purple ink in the corners. After this it was gloss varnished to make it shine. Hopefully It gives the impression of craftsmanship beyond the range of men, well that was the idea anyway. 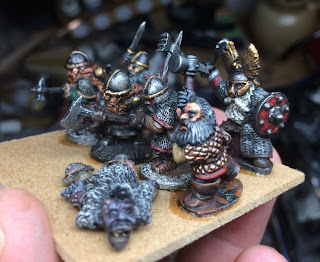 I tried to use lots of different metal colours and shades to enhance their metal working ability. The Orcs just have dirty, rust covered armour so this should contrast nicely. 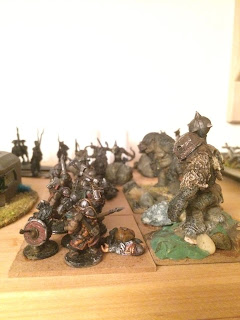 The Dwarves square up to trolls...I have based them as if they were a kind of shield wall. This lot are running forward in an attack but my next company will be in a proper shield wall with large troll spears with hand weapons behind.
Posted by Secundus at 7:26 pm

Brilliant stuff Simon!
How big is your army going to be?

Hi James, I'm not sure, I know I like big armies and I have enough for that.

My main problem is I always get sidetracked into another era before long. It's how many units can I paint up before I start to get tempted by other topics. I would like to have around three companies of twelve as a start i think. If you do the 1:20 thing It turns out I need 24 Dwarves for the iron hills but I would like a few more than that.

Hi Phil, sorry I almost forgot about your question. I'm afraid i don't have that figure, I have lots of early stuff but not that one I'm afraid, sorry. Keep up the search and good luck.

You nailed their armour!