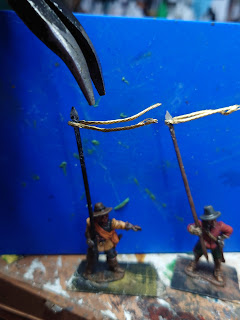 These merry chaps finally get a coat of mat varnish to dull down their strong tone dip.
Below is an idea I had for creating tassels on the standards. This really was intended for my Confederate forces, but it should work just as well for ECW too. 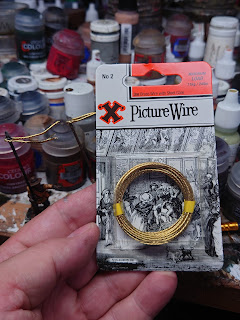 I found the best way was to fold it around the pole and then pinch it tight with some pliers. The pole was coated in superglue, so the wire stays in place. Still a test project so watch this space. 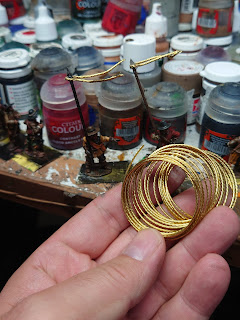 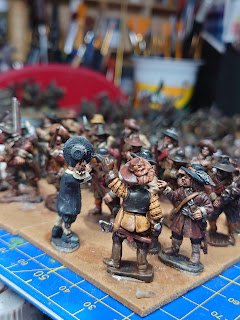 This bunch of Roundheads are getting some holy inspiration and divine armour to help them with the fight ahead. 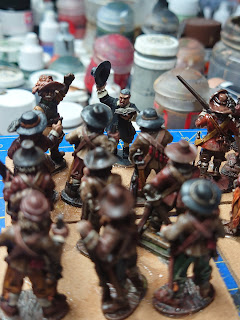 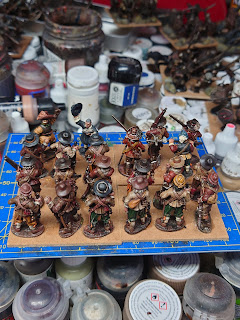 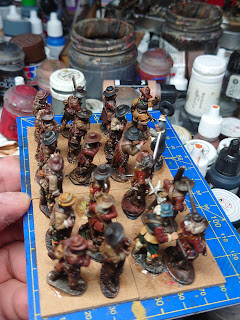 There will also be a command base that will attach itself to the rear of the block. I don't think Commanded shotte had standards, but mine will have two different colours. This will show the two detachments that have been combined to form the ad-hoc unit. 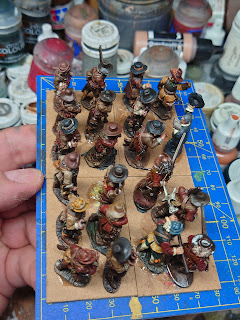 I had to pull a few extras from another regiment to finish this one, they still need their dull coat added. The men are a mix of Bicorne and Renegade miniatures. There are also a couple of Foundry and Redoubt figures in there too. The Foundry figures have been mounted on an extra piece of plastic base, to help them match the height of the larger figures.
Having the unit divided into four bases means the preacher can be placed in the rear when the lead starts to fly.
I base my musketeers on these multiple times bases so they become more versatile. They can now line hedgerows and defenses. They can also be split to form smaller detachments or added to other regiments to form larger units. All these formations should be easy to cater for in Victory without Quarter. 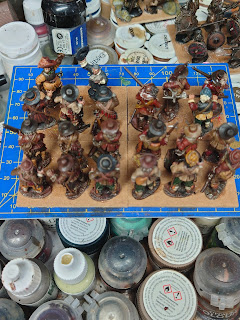 Green trousers mark out one of the detachments. 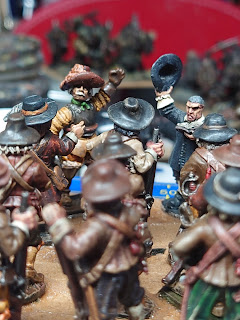 "Keep your faith in God and keep your powder dry!" All this shouting and hat waving gives the impression of a mob rather than a disaplined unit. Maybe the men of Sunnybank aren't mixing with the garrison of Buckley very well. 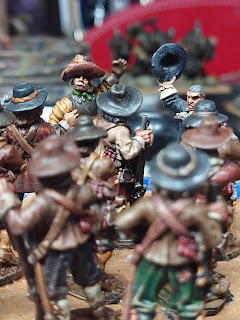 "No Popery!"
UPDATE:
So I've finished the command base and the unit is finished. Just need to flock the bases now ... 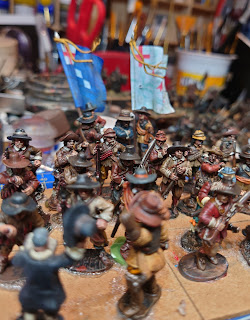 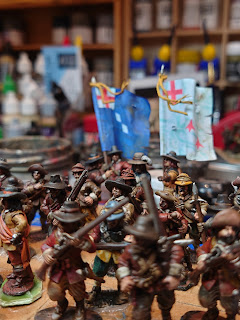 I found these thin paper flags from eBay quite tricky to get right and went through a few before success. They stick instantly with the woodglue and are very hard to adjust into position. This is a little scary as my Buckingham Tryned Band regiment has the same type of ink paper standards. I'll have to be really careful. 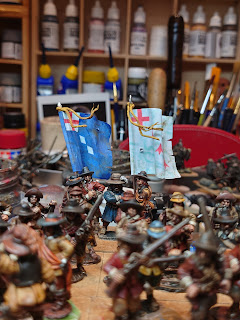 Men stripped from two garrisons form up. This unit has no pike and will be vulnerable to cavalry attack. In Victory without Quarter this smaller formation only has two wounds as they are missing their pike element.
However, they can still deliver a full six dice musket attack so are still a formidable unit on the field. 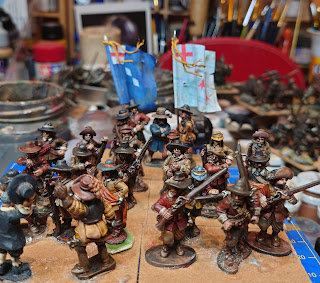 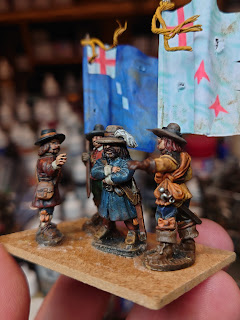 Enemy horse has been spotted forming up on the low ground behind the church...what are our orders sir?
Colonel Tyrrell is getting advice from all sides, but they can't all be right. It's tough at the top. 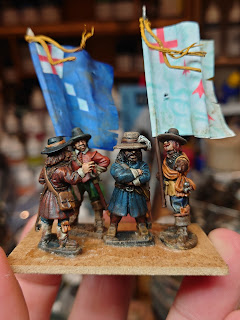 The picture frame wire looks good in the end, but it doesn't like acrylic paint at all. I will have to complete the standards and then undercoat them with the figure. That might be the answer to the paint coming off while ink washing. 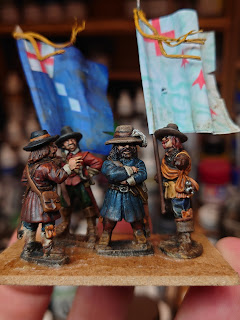 Two standards show the different garrisons the men have been drafted from. This may not be historically correct, but I love units with lots of flags.