Stay on taget...stay on target 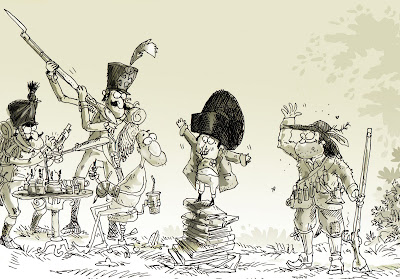 After my weekend brush with the Round heads, my painting eye started to wander again as I looked at my unpainted Royalist army. However, I can't quite leave the land of Napoleon just yet as I still have so much to do.

I still buy the odd Regiment from Renegade miniatures while they are still at give away prices, although I have noticed their cost has started to creep up slowly. Their new cavalry with pistols did tempt me this week though. My plan is to collect two sizable armies at a low price and keep them on ice for a year until I can paint them in earnest. It's a good time to be collecting ECW with many companies releasing ranges.
Posted by Secundus at 4:12 pm

I've bought them but I'm a bit dubious as it looks like some parts of the rules are missing..;

I'm rebasing a large French army I've had for a year or two, but I have bought the rules to use with them when they're finished.

I haven't read them cover to cover yet but I hear a lot of people saying the same as you. Some rules are over simple and some seem to be missing altogether. Also many seem to be over complicated like the Artillery for example.

I haven't played them yet and It looks like It'll be a very long time before I do. For the time being I just flick through them and use them as an inspiration to help me finish my French masses. It's certainly one of the nicest looking rule sets on the market...

My friend Alanicus will have to read it through and see if he likes it, while I paint like a mad thing to get the British under way.

Of course Warlord Games have just released 'Black Powder' which could become a rival.

P.S Greg I loved those Terminator Marines you painted the other day, really nice chipping and weathering on the armour. Excellent stuff, It made me want to paint up a few of them myself.

Staying on target is a real hard task is almost impossible to maintain.(LoL!)
Your right that ECW seems to be growing as of late.

Those termies were really made fast. If i get a pocket video recorder (I may have one in my new phone), I ll try and post some pictures.

Do you know how many minies per bases for black powder ? Or at least if multiple bases can be used ? I m also using Napoleon because of the nice pictures and to base and paint some troups. This is going to be a long side project, I think. I aim to have a nice looking french force and same for an uk one. And eventually play a game or two one of those days...

Do you know of any Foundry's forum or support ?

I haven't really looked into the Foundry support yet, I guess I should do. I know they produce nice bases for the game and have released ready made units of all the armies involved.

I did hear somewhere there was a free down loads but don't quote me on that. I also found a review of the game today which gave it a big thumbs up.

I'm afraid I know nothing of Black Powder.

I think it's safe to base up four per base for most games and use markers for casualities.

I am rethinking my basing technique and am quite enjoying the four per base look for 'Horse and Musket' armies.