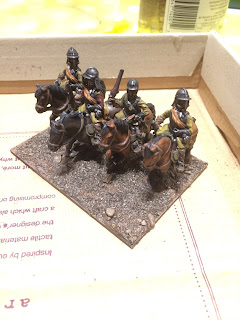 I had the idea of using 6mm static grass to base these Essex Miniatures ECW cavalry. I figured that 6mm would be long enough to look like a wild, rough field or an over grown meadow. I have been taking pictures of the meadow behind my house and making a note of what It looks like over the course of the year. My favourite time is summer when It becomes a mass of yellow buttercups. This I thought would look just the ticket for a unit base. 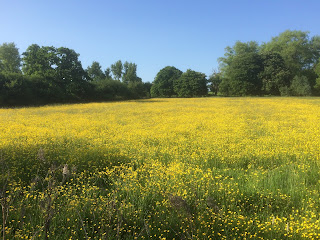 I didn't want to spend too long on these bases so opted for my usual fast flock approach. The first layer of flock is a dark earth, followed by a light earth then by patches of a subtle green flock. you could go on for ever adding flock of different colour but I wanted to get onto the static grass bit. I have never done this before and have had an applicator stuck on my desk for almost a year now, time to use it. 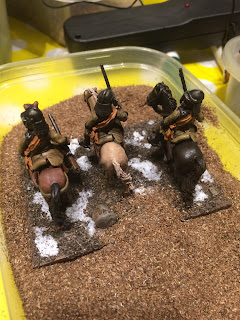 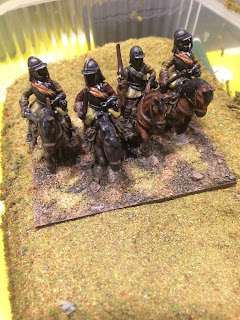 this subtle green I have labelled American earth after using it for my ACW bases. It's dry look makes for a fantastic base for the Americas. 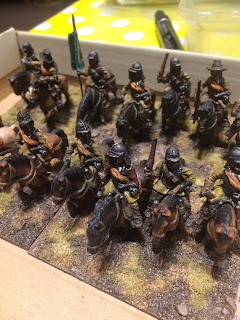 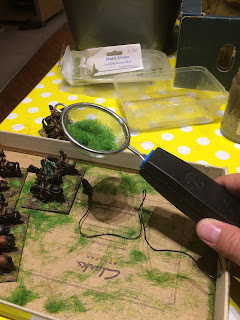 After the three colours of flock were done I tried the applicator with 6mm static grass in. I may have to read the leaflet again as I'm not totally sure I was doing it right. I found it hard to put the metal nail into the MDF so just clamped it on to the side instead. 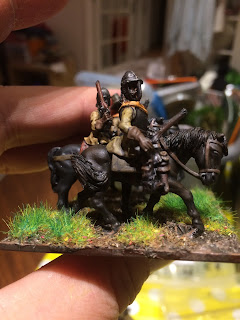 After a bit of working it all out I was quite pleased with the length of the grass and thought the effect was successful. Grass tufts are good but for larger areas this seemed to work. The flowers were tufts and these were placed in random places. I had planned to put loads on just like the buttercup meadow, but I found that less was more. Not too many, just enough making sure i left space for the earth flocks to show through.
Posted by Secundus at 2:00 pm

Nice Essex cavalry and the basing has come out really well.
Best Iain