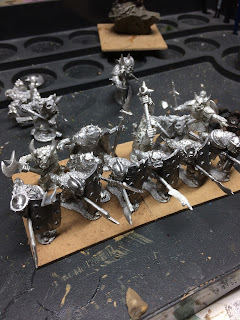 Here are some working ideas for a unit representing the powerful bodyguard of Bolg that caused poor old Thorin so much trouble. Looking at It ( designed for Dragon Rampant) I decided to double the size of the unit, so four bases. In DR it means there will be two units of guard, although these figures are based to use with any rule set and I'm looking forward to the release of Osprey's/ Northstar fanstasy rules next year. Whatever rules used these guys will be a nasty tough nut to crack. 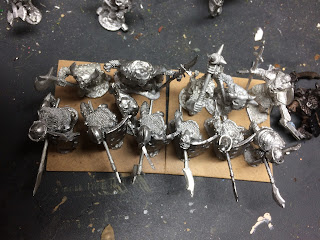 I was delighted after placing a test order to Alternative Armies miniatures on their new range of orcs to find that these guys were massive. I think they are called Western Uruks on the site. Well they are so big that they match the scale of the Great goblins I have from Black Tree. They come with empty hands so I found some long cutting weapons to make them look business.
Also these guys proved to be unbreakable in the battle until Beorn turned up, I read that as the unit being of a shield wall in nature. So I ordered some pavise shields from Essex miniatures to act as an unbreakable wall of wood and iron. 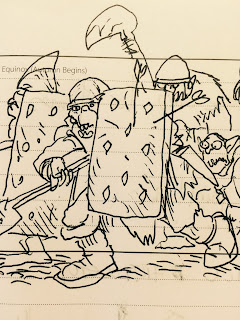 I'm quite pleased with them so far and I'm glad I held off tackling the unit until now, the new figures from AA really are spot on for what I imagined and the shield wall idea is defiantly a winner I think.

They should tower over the struggling Dwarfs and their puny axes....that's a thought, I'd better put some axes sticking out of the shields.

Nice figures, I'd not seen them before. I'm looking forward to seeing how they paint up.