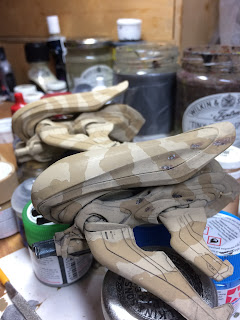 As I prepare to paint my hi tech Soriogs from Khurisan I thought I'd would try my new camo technique on some Halo toys and give them something to ride in. As the Soriog are based loosely on the 'Elites' in Halo it goes without saying that anything from the Halo universe would look good with them.
After a bit of looking around I found these toys on eBay. Just lately I found a larger version that will become a heavy VTOL. These flyers could be classed as attack craft with their huge forward plasma cannons, although I think I will use them as medium class VTOLs. Medium class can carry a single squad of Aliens (6) with the heavy class carrying two (12).

I imagine the hi tech Soriog wanting to get in close to their foes and quickly too. These grav VTOLs  should be the answer. The rules (GRUNTZ) say If a VTOL is shot down in flight all on board are lost, that could a way of taking out a whole squad of very deadly and expensive Aliens. 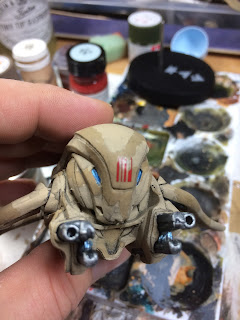 Blue steel eyes really shine out of hull. This model will be given a wash of kleen floor varnish, this will give it a nice sheen and help blend the camo. 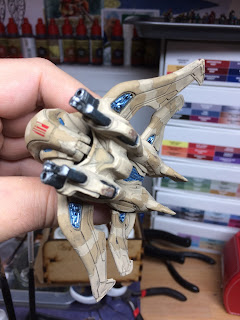 I used a Tau decal for a bit of Alien looking insignia on the front of the VTOL, I think It works. I also painted some panels under the craft in Blue steel from miniature paints. This stuff is great for futuristic models. 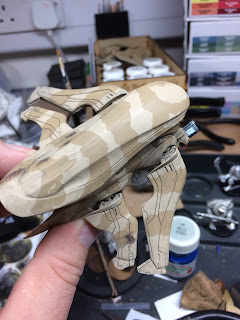 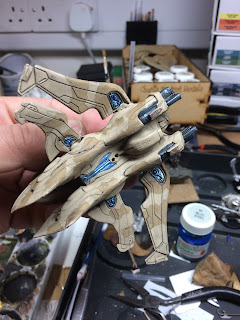 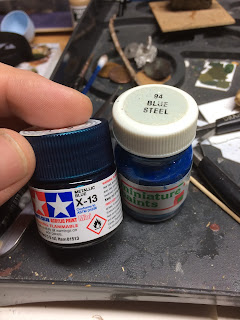 IRON MITTEN TIP #34. Two paints that every Sci-fi painter should have in his paint rack. Tamiya Metallic blue and  Miniature paints' Blue steel. If you are painting anything Alien these two paints will come into their own. 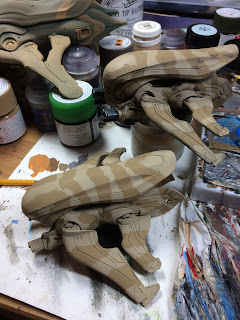 The Soriog war machine is starting to gear up, those poor settlers on Proctos 9 are in for a hard time. The Heavy VTOL can be seen in the background.
Posted by Secundus at 1:54 pm

Cool, I bet they will look great on the table top.

Hey There !
My name is Joshua Stawiarski Co - Editor Of TalkWargaming.com

Sorry if this message is presented in a spammy way but it’s hard to contact a lot of wargamers properly.

I wanted to inquire about if you would be interested in selling published content you created that is on your website to us over here at talkwargaming.com as we are looking to diversify our content mix from Sci-Fi.

If you are interested or have questions we can go over more details at: editortalkwargaming@gmail.com
Put In The Subject Heading : “ Wargame Creator ”

Looking forward to hearing from you,
Sincerely,
Co - Editor Of talkwargaming.com