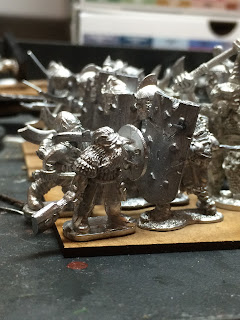 I love this pic, I actually measured the shields up against the Dwarves and they are the same size. Perfect I thought, they are going to have real trouble getting through those. 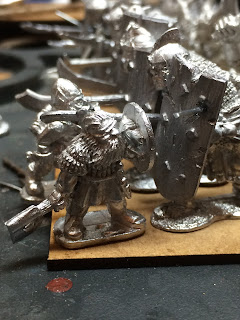 To add to the veteran nature of these huge Goblins I have cut chunks out of their shields using a file and added paper clip arrows. There is also an axe stuck in one. I will add a blob of superglue to the ends of these arrows and paint them as feathers. 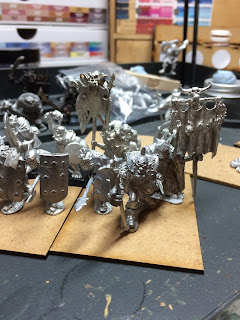 An order of a group of elves from eBay turned up with a huge orc in it a few years ago, I don't know who made him but he is a perfect captain for the Bolg body guard. He was going to be on Bolg's base guarding him but now he will actually lead the unit. The standards are from Reaper miniatures. I have included two on the leader base as this is an elite unit, there are also a high number of horns and drums in the unit as befits their status.

The bases will increase to a 60mm wide x 80mm deep to fit the larger figures and their long weapons. It's the 60mm frontage that matters, also makes them look a little bit more intimidating on the field. The extra space at the front I will use to put dead enemies on, this looks good and also makes the unit look effective.. 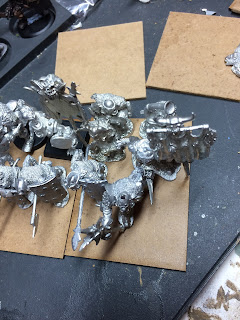 I'm really excited about creating this unit , It's the cherry on the Orc cake after years of painting grunts and maggots.
Skin tone wise...these are huge Goblins but I don't see them as being Uruk-Hai. I see them as being an older race from the deep mountains and one from which Sauron probably took from to create the Uruk-Hai of the Third Age.
So for their skin I will still make very dark almost black but not with a blue hue ( One I use for Black Uruks). Maybe a very dark brown or with even a greenness to the tone would look good. I am not a fan of green GW orc tones but If it is dark enough It might look good. Maybe a mix of lots of different dark tones with the smaller goblins being of a lighter skin tone. 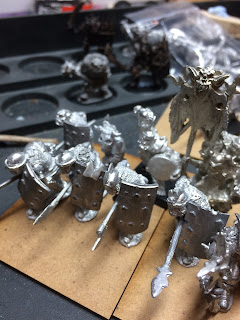 Where did these goblins/orcs come from?

Where did the orc with the shields come from?

Where are the spears from? I really love the idea of the unit.