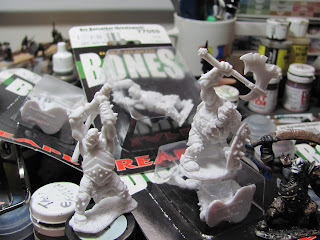 After the fun messing around with the smaller Goblins, these large Orcs were a must. I had the idea early on that they would be Orc Beserkers because of their size and fighting positions. After a little working out, I came up with the idea of mounting two of them to a base, all my 60x60mm Lotr bases will have four attacks and six wounds. These giant maniacs are no exception. 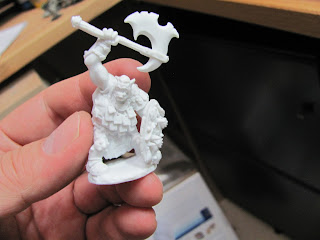 I saw this figure a while ago and thought he would make a great Bolg, finding him in plastic was a lucky find and didn't break the bank. He is a good size and stands in a great leader position, crying out to be mounted on a rock shouting to his men. 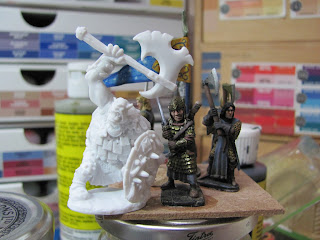 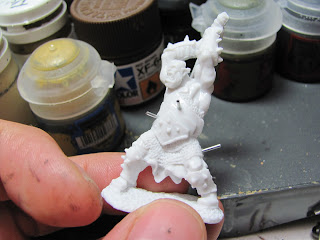 To give the impression of being a Beserker I riddled some of them in arrows. I took this idea from the Lotr films and figures. The arrows were made from paper clips with blobs of Superglue added to the ends to act as flights. Once painted, hopefully they should look like arrows. 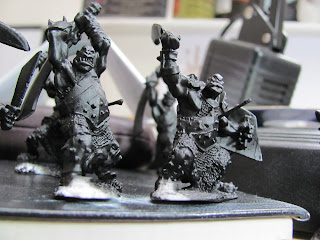 They should make a great shield breaker unit and have that unstoppable look to them. Like the Reaper Goblins, I cut and swapped hands and weapons around to make variants within the unit. 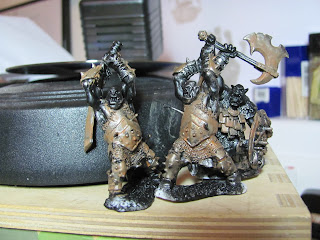 These guys don't  care about armour and it shows. Painting their armour was good fun and gave me a chance to try something new... a sponge
Posted by Secundus at 11:13 pm

This article is really fantastic and thanks for sharing the valuable post.