I came across this excellent review on another blog by a guy called Norm. It is very well written and observed and very useful. I learned a lot from reading it and I thought I knew the rules well.

Turns out I had the 10% rule wrong, so if you are interested in the Bonny Blue Flag rules… read this review. 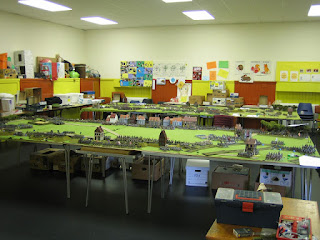 Above is another interesting article concerning BBF, it shows part of a giant Napoleonic game, the battle of Dresden. This was posted by a guy called Olicana on the ‘League of Gentlemen’ website. The actual battle was played on four tables between 12-15 players over a two day period. This shows the rules can handle big battles and multiple opponents with ease.
I have been giving some thought lately to turning the ACW rules as written into a Napoleonic set as I know they work well for that era too. They could be used as written to be honest with the fighting Confederate cavalry +10 on the melee table, being used for Napoleonic heavy cavalry. This would show their shock in close combat, the lesser +5 for Union cavalry, could be used for the lighter branches of horse like hussars. Forming and fighting in squares ( the only thing not in the ACW rule set to be fair) I could probably lift from Kevin’s other game ‘Up the Nile’. If someone already has a copy of these Napoleonic house rules, please leave a comment. I’d love to get my hands on one and see the alterations used for the period, many thanks Simon. Thanks for the shout out. Very interesting to see BBF playing out across 4 tables, surely too much goodness :-)

Haha that’s okay, I’m always looking out for more info on the rules and your post I thought was excellent. As I keep saying it taught me a few things, I hadn’t realised the skirmishers played such a big part in prolonging the game play.

Simon if you check out Angus Konstams Orkney wargames blog there are LoGW game reports using BBF and Waiting for Bonaparte in the rules used section.
Kevin

Great thanks again Kevin, I’ll look him up.

It’s all good stuff and funny enough none of the seven games or so were set in the ACW. A real wide scope of gaming there.