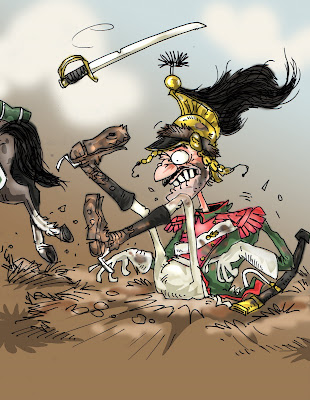 I have been researching the numbers set by the 'Napoleon' rule set into why Light cavalry units are 12 figures and Heavy Regiments are 16. I have found that there isn't really any reason for this as all Cavalry units (on paper anyway) were about four Squadrons. Both Light Cavalry and Heavy Cavalry were the same, even Hussars were formed of four Squadrons. I know that by posting this post and spending three hours researching, I have gone too far. I have stumbled off the track of gaming, like many a war gamer and started to wade into the bog of facts and figures. I'm sure it's just be a game mechanic to increase game enjoyment and give a taste of the era, but It bugged me that I couldn't find the reason for It.

Of course, none of this really matters for numbers on the field were all over the place and the figures for units at Waterloo are very varied indeed. Some poor Cuirassier units could only field two Squadrons on the day.

As It stands at the moment I have increased my 'Heavies' to 16 per Regiment (four Squadrons) and my 'Lights' stand at 14 per Regiment, putting them just under full strength. As I am building a Waterloo based Army, I was relieved to see many Line Lancer and Chasseur a Cheval Regiments of four Squadrons were present on the day.
Posted by Secundus at 1:28 pm

It's much easier having a rule set tell you what you need than having to research it ;)

Are these cavalry units ones that you painted before or are painting up now, specifically for Napoleon?

P.S. I'd love to see some more photos of your army of Syria.

That cartoon is making my butt hurt just looking at it. A couple of years ago I had the indignity of being 'thrown' from a donkey...

I got hit between the eyes with a cricket ball when I was 4.

Please be warned I seem to started a war with a load of Chinese spammers. If you want to see women sucking Bananas shaped like a penis then feel free, but I advise everyone to ignore them. I have just spent ten minutes deleting them all.

I think they are getting really miffed I took all their others down and have started to post twenty at a time now. This Blog has become popular within the last few days and with success came the Spammers like rats on a ship. Oh well, a big sorry to all those Mittener's out there who justed wanted to talk about the hobby.

BRB I followed your link to the Waterloo 'touching history' site, very impressive.

Love the work you do, for I myself am a war gamer, and I love how you go into detail about every single unit and give a nice little caricature or cartoon to give a little personality.
I'm starting a blog and would love any advice from a great blogger like you.
My blog URL: http://chameleonicblog.blogspot.com/

i'm glad i stopped by.

i saw you listed in the blogs of note section.

greetings from a photographer in atlanta, ga

@Secundus: You missed a SPAMmer's deposit from Jan. 10th...

P.S. what resources did you use for the colour schemes on your horse archers?

Hi Consul, I used the Osprey books mostly and a few other Angus Mc Bride pictures he did for other books. Just stick to light browns of all shades with a few blues and reds thrown in. Mix a little light brown with all your brighter colours and this will tie them together better. It's a trick the Late Mc Bride used in his actual illustrations.

Ah OK. Which books specifically did you use? I have a book token which needs using! Our local Waterstones stocks an unexpected large selection of Osprey books...

The main two were Osprey's 'Rome's enemies 3, Parthians and Sassanid Persians' and 'Sassanian Armies' by Davd Nicolle ISBN1 874101086. I hope this helps. If you find the Osprey it should cover it really.