Almost there on the basing front. 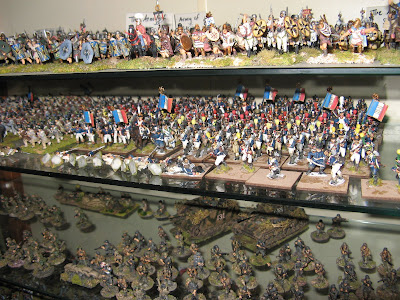 Just over half the army is re based now and looking good in their new formations.

I shudder to think of the day I have to flock these guys, that will be a long day. Best not think of It yet, instead look at all the new french units...joy. Lucky for me my four Cavalry units will not need re basing and should pass muster. It's so good to have them organised at last, as I mentioned earlier, I created these units in the hope of a 28mm War hammer game. After years of waiting their are now two to choose from which fit the bill, Foundry's 'Napoleon' and Warlord Game's 'Black Powder'. I like the look of both these games and they both have their merits. At the moment we are leaning towards 'Napoleon' because it is based solely on the correct era and it has army lists and point values. 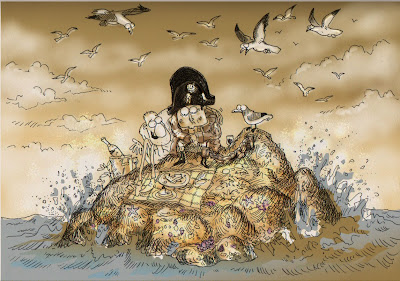 It's like waiting five years for a bus, you wait for a good 28mm Napoleonic game to come along, then two come along at the same time.
Posted by Secundus at 12:53 pm

"you wait for a good 28mm Napoleonic game to come along, then two come along at the same time. "

You should wait until you've played them before saying that. Over the years I've purchased many rules that I thought "we're the one", painted up armies for the rules, then, after playing a few games decided the rules really weren't that good.

You have a very impressive collection of miniatures. I've tried Black Powder a fee times (w/6mm ACW miniatures) and have found the rules to be very fun to play and well suited for a social evening of gaming. The blunder table is a joy to behold when it bedevils your opponent. Of course in those dark moments when you find yourself looking upon it it may seem arbitrary and capricious but it's great fun. I've read the Napoleon rules but haven't played them so can't give an informed opinion.

Have you tried http://www.warbases.co.uk/ for an alternate to Foundry bases?

Thanks for the tip Consul. I didn't have much luck with the Pay Pal so I went down the money grabbing Foundry route again.