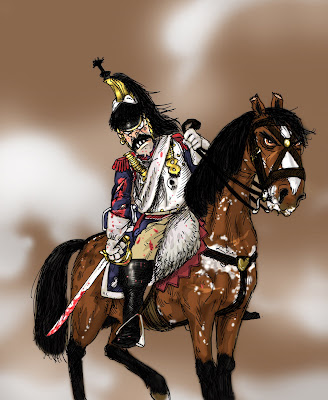 Heavy cavalry doesn't get much heavier than this, a huge Cuirassier mounted on stallion from Normandy. They were known as Napoleon's 'big brothers' for good reason.

Like many cavalry horses of the eighteenth Century, this one has lost chunks of his ears from sword cuts by both friend and foe alike.
Posted by Secundus at 8:25 pm

Well he is very shiny. I wouldn't say that out loud though, he might hear you. I'd stay with me in the Infantry square where It's nice and safe.

Wonderful work! I mean the entire page not just this guy. I see pictures reminiscent of old political cartoons from the 50s. Great work!

Whoa. This stuff is amazing- made my day!

Hey! Go to my blog!
www.SuperIanz.blogspot.com
And i followed ur blog!
luv it!

Oh,your blog is very nice .I really like it ^^!

you drew this?? wow! you're so talented!

That man have good face expression

Don't forget to follow me back in makeyourpoem.blogspot.com
Thanks

That horse looks surly. Wouldn't serve it another.

A cuirassier AND his horse with attitude and a bit of tomato sauce splashed about for good effect.

Better start painting up some figures to go with it eh? Nice box of Perry's 'eavies perhaps? (hint, hint)

I'm quite enjoying doing mine - in two groups of eight - that's four full strength squadrons @ 50 per figure OR two under-strength 'on-the-road' job regiments! I get that AND a 12 figure one of Carabiniers from two boxes of Perrys!

So waddaya reckon? Get paintin' my son - that's the ticket! [grin]

Vaguely reminiscent of the old "Groo the Wanderer" comics.

Great picture (one of you best)

I wonder if I should go about filing down the ears of mu 28mm Cuirassier mounts?

Great work! Thats I mean all of your pages is crazy. The picture is good with title the old political cartoons.