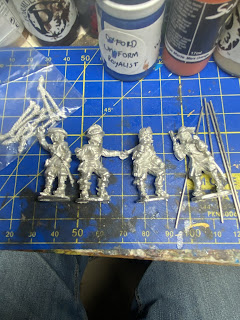 I took a gamble the other day and ordered some ECW Ensigns from 1st Corps, this was to see if they could be used with the large Bicorne and giant Renegade figures. Well I’ve just opened the parcel and I have to say I’m really impressed. Not only were they a good large size but the main thing was they came with Flag poles and spear tops for the standards. I was just planning to place another order to Bicorne for some more standard tops, now I won’t need too. £5 for standards and four different figures I think is pretty damn good value. 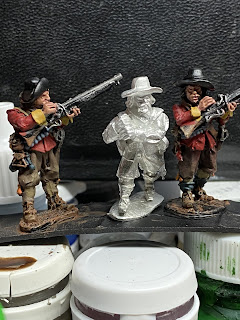 They match the Bicorne figures very well and this is good news because I’ve been looking at their pikemen for some time. I’m really pleased with these two packs and will definitely be using them for my regiments going forward. It’s a good time to be doing ECW that is for sure, there is so much to chose from now. 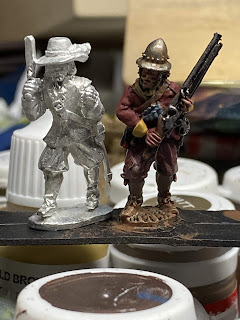 In the world of ECW figures there are two distinct groups, the mid size like Warlord, Foundry, Essex, Dixon, Assault group etc and then the large figures of Bicorne and Renegade. These figures cleverly fit somewhere in the middle with maybe a slant towards the larger side of things. Very clever thinking from 1st Corps, no matter if your army is Warlord plastic or Bicorne lead, these miniatures will merge in nicely with your existing forces. 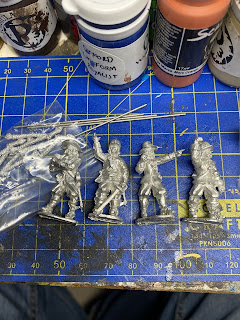 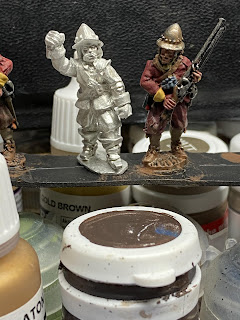 Lovely sculpts, sadly no good for my ECW armies but great looking figures.

Yes they are. I have a few packs of them and they are very nicely sculpted and cast. They match acceptably with my Warlord Games metals but a bit large set beside their plastics.I'll still mix them though as it isn't noticeable on the wargames table.

You missed out Empress Miniatures

I think the Empress figures are quite tall and slender. I imagine these 1st corps would work with them nicely.