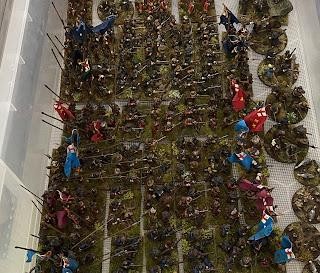 The Trained Bands March up stairs to join the army of Parliament. 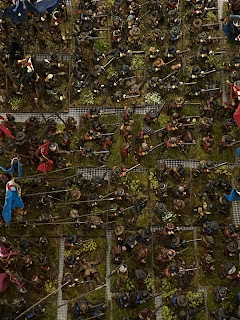 It’s always hard to know when to stop on a project like this, I thought five regiments were going to be it, but then I pushed myself to complete another. Now this should be a more rounded force of two brigades of three units. This should look better and make for longer games.
There are still a few things I could add, being early Parliamentarian, I could do a unit of curassier to give some real backbone to the army. Also I have some nice iron side cavalry from a few ranges which need to be painted, but as for infantry I think this will do for the time being. 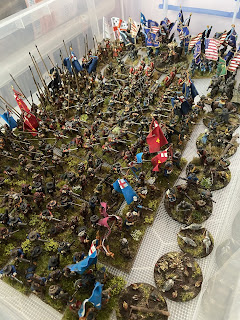 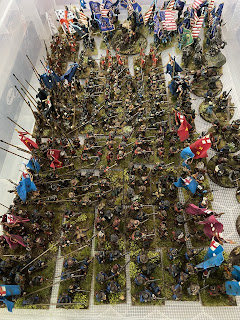 It’s time to start thinking about the Royalist forces now. I plan to do a couple of things different with those.
As many people know the Royalist forces struggled to procure firearms early in the war, until they captured Bristol with it gun making capabilities. This reflected in the formations of the early war having more pikemen than their Parliamentarian brethren.
So to emulate this I’m going to create units with less musket and slightly more pikes to a regiment. Not many, but at least two regiments to give a Royalist flavour to the army.
So a bigger pike block in the middle with less guns at either side, this will have a slight rule tweak in Victory without Quarter, having a melee of 7D6 but a shoot of 5D6. The advantage in close combat but disadvantage at distance should give a real Royalist character to the units.
Another nice regiment to do  is a unit of nearly all pikes. This could be a newly raised raw regiment hastily equipped. This would look good on the field and be also be  interesting  to play. It would have a melee of 8D6 but a very poor shoot of 4D6.
Just some early ideas, but basically playing with the fact that units in Victory without Quarter have 6D6 melee and 6D6 shooting, borrowing from one stat and giving to the other will create off set units, this should lead to some real period character in games.
Posted by Secundus at 7:07 pm

Mighty force to be reckoned with.