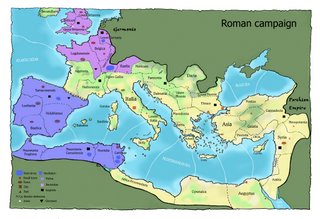 So here it is at last, the world as we know it. It's all pretty self explanatory really, although it doesn't look it, both sides are earning roughly the same in Province income.
Tullus still uses his armies in vexillations down in Carthage and Secundus's whole army waits outside Raetia.

Note a tiny silver mine that has been found in Upper Britannia, shown by the white triangle.

Both armies seem to be keeping their distance from one another......but for how much longer?
Game after six turns each (one year and six months)
Posted by Secundus at 8:52 pm

Relax my old friend, your time will come. You always said you wanted to see Rome, well here's your chance. There you'll have all the wine you can drink and there'll be plenty of heads to break before we get in.

OK, this might be me being exceptionally colour blind, but why are the two territories the same colour or very similar? It's confusing to dimwits like me, but moreover it's the classic Geography lesson mistake - use lots of different colours to colour in the map. It's prettier.

Oh, Greetings once more Mr. Bowmonica, by the way. Thought I might point out that: yes,yes, Secundus has got Raetia - Oooohhh, and Upper and Lower Germany - Aaaahhh, etc. But Tullus has definitely got the pick of all the best holiday spots. Sun, sea, sand and ... centurions?

He can enjoy his centurions all he likes, I want to break heads and party...