With the German raiding party causing mayhem along the western banks of the Rhine, It was left to Stuba and his Sarmation heavy horse to stop them. Stuba already had experience in fighting the Germans and second guessed their every move. 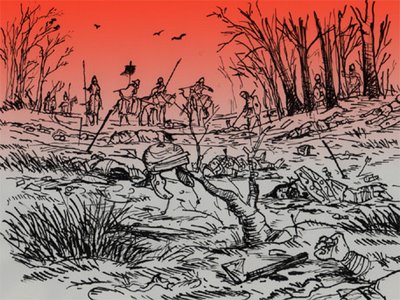 After weeks of shadowing them, he finally tricked them into accepting open battle and with the help of the III Pannonian horse cut them to pieces. For this act he received great praise and reward and the name of his unit became one of renown.

In game terms Stuba's unit receives veteran status.
Posted by Secundus at 11:44 am

I'm missing all the sarcastic banter on your blog simon!

Nice to see you on the Blog Martha, I'm glad you like it. At the moment I'm trying out quick little sketches using a dip pen and ink, the technique gives a really scratchy, bleak picture and fits the off season well.