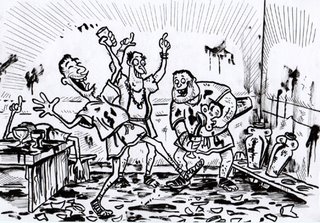 Late in July, Secundus finally had a change of luck as the province of Raetia flocked to him with open arms. Secundus was pleased at the welcome news but not supprized, after all he did have a giant army behind him waiting on the border. He was hoping that the further away from the influence of Hispania he got, the more Provinces would join him without a fight.

Raetia, however, didn't know what hit her as thousands of soldiers decended in to her towns and settlements looking for wine and entertainment. The men had been unhappy for along time and Secundus thought it was better for them to take it out on someone else for a change, instead of his treasury!

Morale soared that month.
Posted by Secundus at 8:24 pm